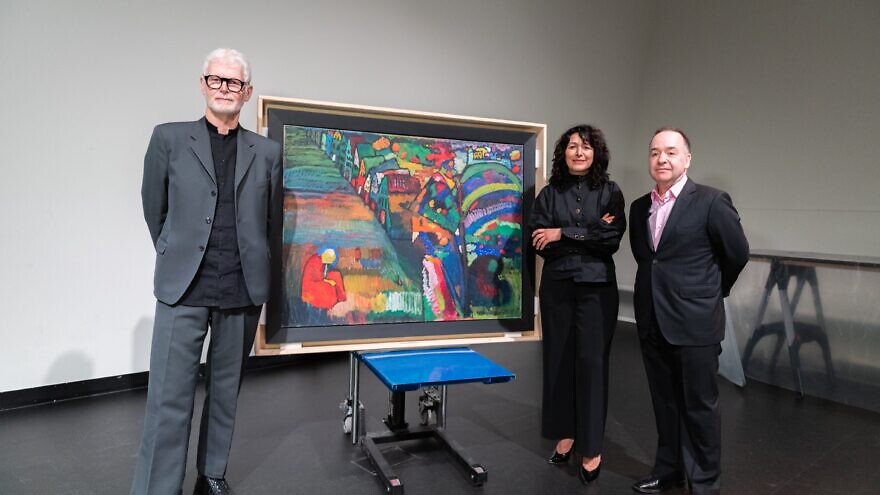 Today the painting 'Bild mit Häusern' by Wassily Kandinsky has been transferred to the heirs of the Jewish former owners, in the presence of Deputy Mayor Touria Meliani, James Palmer on behalf of the heirs and director Stedelijk Museum Rein Wolfs. (Credit: Stedelijk Museum, Twitter).
Spread the word.
Help JNS grow!
Share now:

(February 28, 2022 / JNS) A valuable Wassily Kandinsky painting sold to Amsterdam’s Stedelijk Museum during World War II was returned to the heirs of the Jewish owners.

“Today the painting… has been transferred to the heirs of the Jewish former owners,” the city of Amsterdam said, reported AFP. “The heirs and the municipality have, on the basis of mutual respect, reached a settlement agreement,” it added in a statement.

The 1909 painting “Bild mit Haeusern” (Painting with Houses) was claimed by descendants of the Jewish art collector Emmanuel Lewenstein after his son and wife sold the painting to the museum under duress in 1940 five months after Nazi Germany invaded the Netherlands, the report said.

The dispute began in 2013, but the Dutch Restitutions Committee had rejected the appeal by the heirs at the time. Both sides reached an agreement after a second committee was set up in 2020 and re-investigated the case.

“Part of the agreement with the heirs is that there is no further litigation in the matter,” Marit van Kooij, spokeswoman for Amsterdam deputy mayor Touria Meliani told AFP.

Over 100,000 Jews were deported from the Netherlands to death camps.