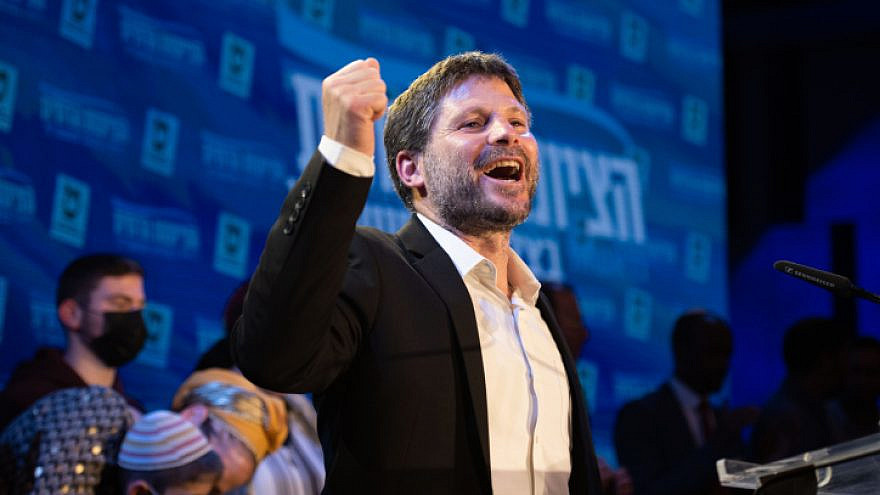 (October 24, 2022 / JNS) On Oct. 18, Knesset Members Bezalel Smotrich and Simcha Rothman of the Religious Zionism Party unveiled a far-reaching plan to reform Israel’s justice system. Titled “Law and Justice Restart,” the plan seeks to rein in what many see as a justice system run amok, upsetting Israel’s system of checks and balances.

Smotrich and Rothman’s three-part plan involves: 1) splitting up the position of Attorney General, “a non-elected governmental authority with unlimited power”; 2) putting a stop to “excessive” judicial activism and 3) removing the “ever present threat of indictment” hanging over public officials. This includes striking “breach of trust” from the criminal code, which has been used as a means to indict public officials for “just about anything.”

Rothman, who sits on the Judicial Selection Committee and prior to becoming a Knesset member founded a group focusing on judicial reform, told JNS that among the plan’s various proposals, instituting the “override clause,” by which the Knesset restricts the High Court’s ability to strike down laws, would likely be the first. “The ‘override clause’ is much easier to carry out than any other single thing,” he said.

The plan stems from the belief, prevalent on Israel’s right, that the left, having failed to win at the ballot box, has turned the judicial system into its power base.

“Through the years, the left has systematically gained control of non-elected government centers of power, injected them with its jargon and worldview and transformed them into the center of gravity for decision-making,” it states.

Haran Fainstein, a retired Israeli judge who teaches at Bar-Ilan University’s Department of Criminology, agreed. He supports the reform plan, saying the judicial system has illegally allocated powers to itself.

“I don’t want to be governed by what they called in ancient Rome the triumvirate, three judges who do not have jurisdiction,” he told JNS. “As a jurist, I was taught that you have to have a specific regulation enabling you to act, or conferring jurisdiction over the court. They don’t have it,” he said.

“I can provide a simple example. The Supreme Court decided they have the power and the jurisdiction to abolish Knesset law. But there’s no law that says so,” he continued.

The Supreme Court has interposed itself in all sorts of matters that should be beyond its purview, from who serves in the military to Jewish dietary laws, he said.

“They decided that they can now annul judgments of the rabbinical court as well. If you have courts in each religious system, Jewish or Muslim or Christian, then stay out. It’s not your problem,” he added.

Religious Zionism’s plan addresses this problem in part by limiting standing to those who have been “directly harmed” by an act or law. “This will put an end to the court’s excessive judicial activism whereby the court hears challenges from anyone interested in thwarting government policy,” the plan states. Currently, Israeli law doesn’t require a petitioner to have “legal standing.”

“It must be split up,” said Fainstein.

Polls show that over the last 20 years, the Supreme Court has lost support among the Israeli public.

Those siding with the judicial system say it’s the critics themselves who have undermined support for the courts. Fainstein dismissed this “chicken and egg” argument, saying that when he started studying law 60 years ago at Hebrew University, judges were viewed as “demigods. We were afraid to speak to them. What we’re seeing now is a reaction.”

Attorney Michael Kleiner, a former Knesset member and currently president of the Likud Court, the Likud Party’s judicial organ, told JNS that judicial reform is also the No. 1 issue for Likud members.

“The selection of [Knesset Member] Yariv Lavin as number one on the [Likud’s Knesset] list is a very strong indication. He more than anybody else in the Likud is identified, and for many years, with a desire to make judicial reform the number one priority,” said Kleiner.

However, while Kleiner believes that Smotrich and Rothman are heading in a “necessary and positive” direction, he said that for reasons pertaining to the election, he regretted the timing of the proposal, coming two weeks before Israelis head to the polls.

The problem, in Kleiner’s view, has to do with the plan’s third part—abolishing “breach of trust” from the penal code; Likud leader Benjamin Netanyahu is accused of “breach of trust” in all three of the corruption cases he is currently on trial for.

Kleiner said that Netanyahu should be acquitted, and agreed that “breach of trust” has been used to criminalize things that were never before a crime. However, he added: “They should have taken into consideration that having Netanyahu in the background will give the left ammunition to portray the Likud and the right as people who don’t respect the law and don’t play fair; that the only motivation is [acquitting] Netanyahu. The election will hinge on small shifts from right to left. We should avoid anything that could be used to convince some people on the ‘soft right’ that we’re somehow not playing fair.”

Hoping to fend off political attacks that the plan is only a cover to help Netanyahu, Smotrich has insisted that the proposed change to the law would not affect Netanyahu’s trial.

“The plan will not apply to Netanyahu, and we will regulate it by law, so as not to give an excuse to the left and the media to reject the whole plan and focus the discussion only on Netanyahu,” he said.

However, Kleiner is skeptical. “Some jurists say—and they have a point, and Rothman at least understands it—that if you erase the legislation that says that this accusation, [so that] this criminal offense doesn’t exist anymore, there’s no way not to apply it to Netanyahu.”

Ironically, in the past it was Netanyahu who was the obstacle to judicial reform and sided with the Supreme Court, noted Kleiner.

“The only positive thing I can say about the Netanyahu trial is that he has now stopped opposing the efforts at reform.”