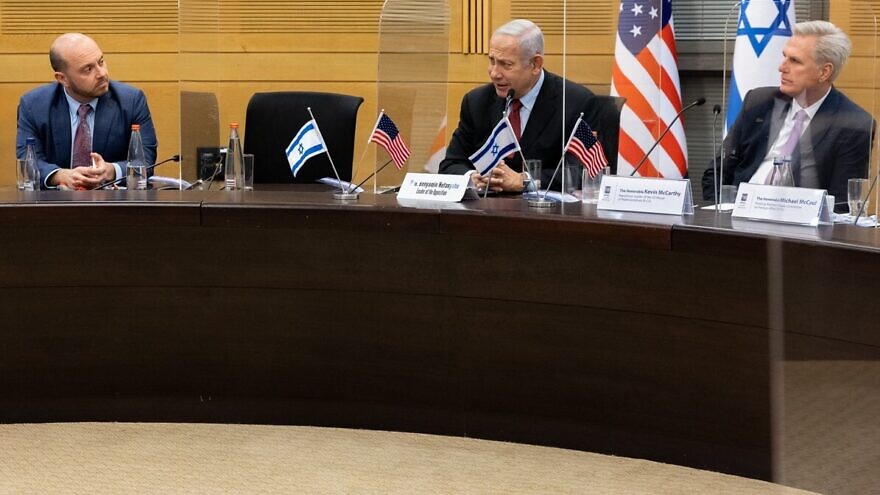 (March 15, 2022 / JNS) Rep. Andrew Garbarino (R-N.Y.), visiting Israel for the first time last month, said the experience was not only “eye-opening,” but helped solidify his support for the Jewish state and understand the danger faced by the Israeli people from the threats of terrorist organizations and states on their borders.

The freshman congressman, who is seeking re-election to New York’s 2nd Congressional District, was one of dozens of members of Congress from both parties to travel to Israel in late February with the AIPAC-affiliated American Israel Education Foundation.

“You read about what a small country it is, and how close to the West Bank and Gaza Strip and Golan Heights—how close everything is. You don’t really get it until you’re driving on the road, and they say, ‘To your left is Tel Aviv, and to the right is the West Bank—the Palestinian-controlled area of the West Bank,” Garbarino, 37, told JNS in an interview.

One of the stops on the tour, said Garbarino, was at a kibbutz near the border with the Gaza Strip where residents live under constant threat of missiles launched by the terrorist organization Hamas. “I feel like it should be required for a member of Congress to go so they can see it, especially the ones on the other side of the issue,” he said.

The tour took the members throughout Israel, having them visit the Knesset, where they met with the Speaker Mickey Levy; as well as with Israeli Prime Minister Naftali Bennett, Foreign Minister Yair Lapid, and opposition leader and longtime former premier Benjamin Netanyahu, among other Israeli political and military officials.

They traveled to the Golan Heights; spent time in Jerusalem, including a visit to the Western Wall; went south to the Dead Sea and Masada; and stopped in Ramallah, where they met with Palestinian Authority Prime Minister Mohammad Shtayyeh.

Garbarino said that Shtayyeh expressed complaints about water, food and the claim that Israel is not allowing elections to be held in Jerusalem. But when Minority Leader Kevin McCarthy (R-Calif.) asked if Shtayyeh can control the missiles launched into Israel—more than 4,000 during last spring’s 11-day conflict with Israel and Hamas in the Gaza Strip—Shtayyeh dismissed the missiles as “more like fireworks.”

Garbarino said if the Palestinians want to negotiate, then they must demonstrate that they can control the missiles from Palestinian terrorist factions.

“They don’t even want to own up to what they’re doing. They can’t even have a serious conversation,” he said.

Garbarino said that the visit reassured him that he’s on the right side of the issue, just as for him, it also highlighted the need for the United States to continue providing funds for Israel in its budget.

During the visit, the members also visited an Iron Dome air-defense battery—a system that was crucial in protecting civilians in the violence last year—and spoke with its operators.

Garbarino said that he learned from his career as a lawyer that the two sides cannot be forced into negotiations.

“I think everybody wants there to be peace. I think the Palestinians want their own state. I think Israel is willing to have that negotiation. But you can’t until the Palestinians can show that they can get control, get rid of Hamas, these missiles, these tunnels and these threats. You can’t have any sort of solution, which should by the way be negotiated between Palestinians and Israel,” he said.

‘We need to do whatever we can’

Predictably, Iran was extensively discussed when the lawmakers met with Israeli officials, who were concerned at the concessions, including sanctions relief, that the United States was willing to give in order to re-enter the 2015 Joint Comprehensive Plan of Action (JCPOA) with Iran and the threat it could pose to Israeli security.

“The fact that the new demands from Iran is to take the [Islamic] Revolutionary Guard [Corps] off the terrorist watchlist, I don’t know how we agreed to that. It sounds like [U.S.] President [Joe] Biden and his team are going to agree to it, which blows my mind,” said Garbarino. “If this deal was sent to Congress like it should be … [but] I don’t think they will …. I don’t think it would be ratified. I think there’s enough opposition.”

One of the members of Congress visiting Israel along with Garbarino was Rep. Victoria Spartz (R-Ind.), a Ukrainian-American and the first Congress member elected from a former Soviet Republic. She traveled to the Poland-Ukraine border after the Israel visit to see the humanitarian crisis firsthand and sent her colleagues videos, reported Garbarino.

He said that he understood that Israel was in a delicate situation with the conflict, as Israeli fighter jets are able to enter Syrian airspace without Russia’s interference.

(While the members were in Tiberias, Israeli military jets flew over them; the next day, they found out that the jets had raided Syrian military targets near Damascus.)

He said that the United States must do everything it can to support Ukraine, adding that he even supports a no-fly zone with “what we’re seeing happening with some of these cities.”

“We should be doing whatever we can to help them because I think there’s evidence that [Russian President Vladimir] Putin and the Russians are committing war crimes with their attacks on civilians,” said Garbarino. “We need to do whatever we can—humanitarian aid, refugees, military—we have to do it all.”