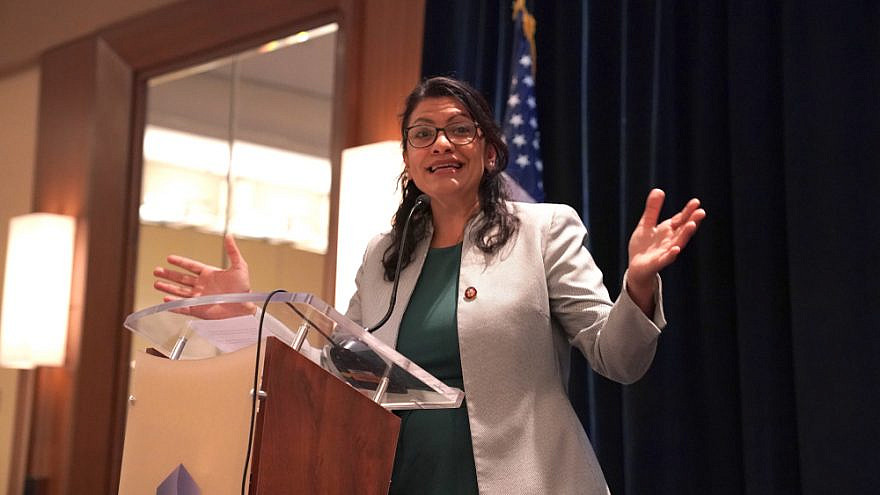 (May 18, 2022 / Israel Hayom) House members led by Rep. Rashida Tlaib (D-Mich.) on Monday introduced a resolution calling for U.S. recognition of the Palestinian nakba, a term meaning “catastrophe” that is typically used by Palestinians to refer to the establishment of the State of Israel.

“Today, I introduced a resolution recognizing the nakba, where 400 Palestinian towns and villages were destroyed, more than 700,000 Palestinians uprooted from their homes and made refugees,” Tlaib, a Detroit-born American of Palestinian descent, wrote on Twitter.

“The nakba is well-documented and continues to play out today. We must acknowledge that the humanity of Palestinians is being denied when folks refuse to acknowledge the war crimes and human-rights violations in apartheid Israel,” she continued.

Tlaib went on to thank the co-sponsors of the resolution, Reps. Alexandria Ocasio-Cortez (D-N.Y.), Ilhan Omar (D-Minn.), Cori Bush (D-Mo.), Jamaal Bowman (D-N.Y.), Betty McCollum (D-Minn.) and Marie Newman (D-Ill.). Along with Tlaib, the first four co-sponsors are all members of what is known as “the Squad.” The sixth “Squad” member, Ayanna Pressley of (D-Mass.), was not a co-signer.

The resolution claims that Palestinians opposed the United Nations’ 1947 recommendation to partition the territory then known as Palestine into two states, one for Arabs and one for Jews. It states that prior to Israel declaring independence on May 14, 1948, hundreds of thousands of Palestinians had fled their homes, “often after attacks by Zionist militias.” It does not make reference to the use of some of those areas by invading Arab nations to attack Israel.

The resolution also characterizes the conflict differently than the U.S. State Department’s Office of the Historian, which states that after the U.N. resolution, “[f]ighting began with attacks by irregular bands of Palestinian Arabs … against Jewish cities, settlements and armed forces.”

Sen. Rick Scott (R-Fla.) reacted angrily to the resolution and urged House Speaker Nancy Pelosi (D-Calif.) to respond, tweeting: “Israel is our great ally and the continued anti-Semitism from radical socialists in the House is horrific. These are @SpeakerPelosi’s Democrat members. Does she agree with them? If not, she must immediately condemn this.”

The U.S. Campaign for Palestinian Rights, an advocacy group, hailed the measure, saying, “For far too long, the Palestinian experience has been ignored by Washington, and Palestinians have been gaslit for trying to tell their story. We must shift U.S. foreign policy away from enabling Israel’s ongoing displacement of Palestinians with military funding—and towards accountability.”