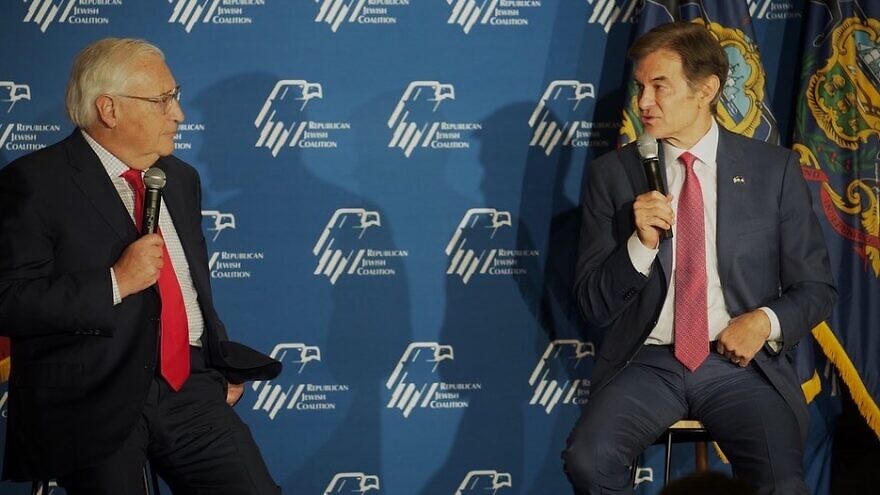 (October 31, 2022 / JNS) With only a week to go until the American midterm elections, the Republican Jewish Coalition (RJC) is doubling down on its efforts to bolster Republican U.S. Senate nominee in Pennsylvania Dr. Mehmet Oz by announcing that it would be running an ad attacking Democratic nominee, Lt. Gov. John Fetterman.

According to a statement on Monday, RJC said that it had made a $350,000 independent expenditure in the race. The ad buy brings the total that RJC spent in the race on TV ads to $1,85 million—the largest ever for RJC during the midterms. The total amount it has spent on the race for all platforms exceeds $3 million.

The new ads come after the race’s first and only debate last week, in which Fetterman struggled to answer questions due to the effects of a stroke he sustained during the primaries, raising questions of whether he is fit to serve in the Senate.

RJC Executive Director Matt Brooks said in the statement that the debate exposed Fetterman as totally unfit to serve and again brought up the 2013 incident—at which RJC’s ads take aim—of when Fetterman detained a black person with a shotgun.

“At last week’s debate—the only debate John Fetterman agreed to participate in after months of dodging—Fetterman was asked directly why he still had not apologized for pulling a shotgun on an unarmed, innocent Black man in 2013,” Brooks said. “And once again, John Fetterman did not apologize to the victim, Christopher Miyares, to the black community, or to the citizens of the Commonwealth of Pennsylvania.”

The ads first ran in early October and targeted the African-American community.