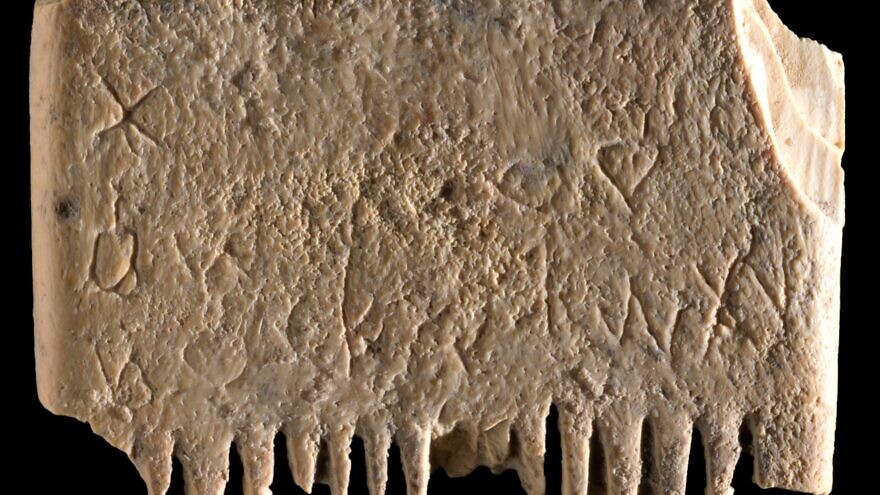 Engraved on this small ivory comb is a Canaanite spell against lice. The inscription reads: "May this tusk root out the lice of the hair and the beard." Photo by Dafna Gazit, Israel Antiquities Authority.
Spread the word.
Help JNS grow!
Share now:

(November 7, 2022 / JNS) Archaeologists have discovered the first entire Canaanite sentence ever found in Israel, the Hebrew University of Jerusalem announced on Monday.

Written on an ivory comb unearthed in 2017, the sentence comprises seven words—a spell against lice. They read: “May this tusk root out the lice of the hair and the beard.”

The 17 Canaanite letters of the inscription are engraved in a very shallow manner.

“They are archaic in form—from the first stage of the invention of the alphabet script,” according to a Hebrew University statement.

Until now, no meaningful Canaanite inscriptions had been found in Israel, save for two or three words.

“This is the first sentence ever found in the Canaanite language in Israel. There are Canaanites in Ugarit in Syria, but they write in a different script, not the alphabet that is used till today,” said professor Yosef Garfinkel of Hebrew University, who directed the team that discovered the comb together with Southern Adventist University professors Michael Hasel and Martin Klingbeil.

“The Canaanite cities are mentioned in Egyptian documents, the Amarna letters, that were written in Akkadian, and in the Hebrew Bible. The comb inscription is direct evidence for the use of the alphabet in daily activities some 3,700 years ago. This is a landmark in the history of the human ability to write,” Garfinkel said.

The comb was unearthed at the ruins of Tel Lachish, an ancient Canaanite and Israelite city mentioned in the Bible. It was the second most important city in the Kingdom of Judah.

While the comb was excavated five years ago, the revelation only came during post-processing this year by Madeleine Mumcuoglu, a research fellow at the Institute of Archaeology at the Hebrew University.

The ivory comb is small,  roughly 3.5 by 2.5 centimeters (1.3 by 0.7 inches). The central part of the comb is eroded, “possibly by the pressure of fingers holding the comb during haircare or removal of lice from the head or beard,” according to the archaeologists.

The comb has teeth on both sides. Only their bases remain. One side of the comb has six thick teeth, which were used to untangle knots in the hair. The other side has 14 fine teeth, used to remove lice and their eggs, much like two-sided lice combs sold in stores in the present-day.