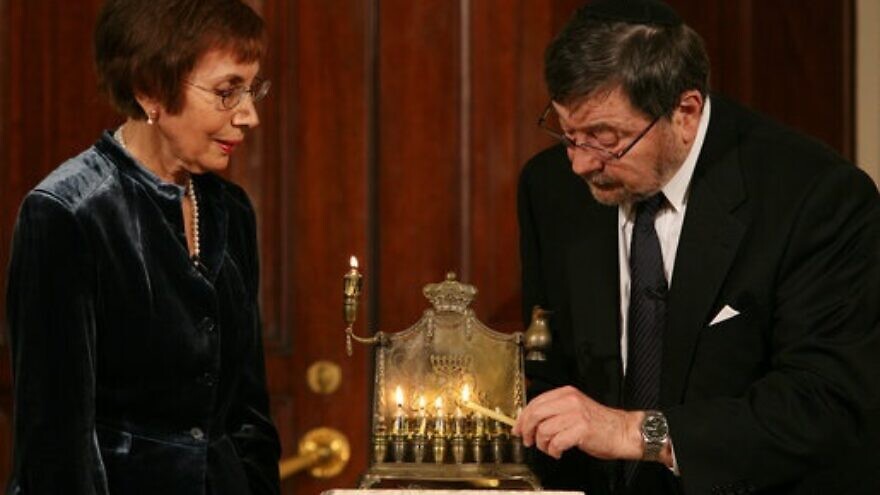 A menorah belonging to the great-grandfather of Daniel Pearl is lit by Judea and Ruth Pearl, his parents, at a Hanukkah celebration on Dec. 10, 2007, in the Grand Foyer of the White House in Washington, D.C. Credit: White House Photo by Joyce N. Boghosian.
Spread the word.
Help JNS grow!
Share now:

In 2002, Ruth Pearl and her husband, Judea Pearl, were thrust into international attention after Al-Qaeda terrorists in Pakistan kidnapped their son, Daniel Pearl, and executed him nine days later.

Pearl, an electrical engineer and computer analyst, was born Eveline Rejwan in Baghdad on Nov. 10, 1935. According to the University of Southern California Shoah Foundation news release, her childhood was interrupted in 1941, when a coup attempt in Iraq left a power vacuum in the British-controlled territory, allowing thousands of Iraqi civilians, soldiers and paramilitary gangs inspired by Nazi propaganda and anti-Zionist fervor to start a pogrom against the Jews in what became known as the “Farhud.”

Pearl spoke of this history in one of 20 interviews of the Visual History Archive about the Jewish experience in North Africa and the Middle East during World War II.

According to the release, at least 179 Baghdadi Jews were killed in the Farhud and hundreds of others raped, injured, or had their homes and livelihoods destroyed. Pearl recalled seeing a bullet fly past her mother while she held her baby sister and watched Jewish-owned shops being looted.

In 1951, she, her younger siblings and her parents were transported to Cyprus and then Israel as part of the mass exodus of Jews from Iraq, forfeiting their citizenship and possessions.

She met her husband, Judea Pearl, while studying electrical engineering at the Technion–Israel Institute of Technology in Haifa. They married in 1960 and moved to New Jersey to pursue graduate degrees. They had three children; Daniel Pearl was the middle child, born on Oct. 10, 1963.

When he was kidnapped, Pearl revealed that she had dreamt that he was in trouble. She woke up and sent her son an email.

“I said, ‘Danny … please humor me and answer this email immediately,’ ” she wrote according to the Shoah Foundation.

Pearl served as the chief financial officer for the foundation, which aims to perpetuate Daniel’s commitment to reaching across divides through journalism and music.

“Dehumanizing people is the first step to inviting violence, like Nazism and fascism,” she said in her testimony. “It’s very easy to dehumanize. I’m sure the killers of Danny didn’t have any sense of identifying with the humanity that connects us. For them, Danny was an object. And that can happen only if you really don’t have your own self-respect and your own respect for human beings. So we have to figure ways to educate the next generation differently.”

In addition to her husband, she is survived by daughters Michelle and Tamara. She is also survived by her daughter-in-law Mariane; her sister Carmella; and grandchildren Leora, Tori, Ari, Evan and Adam.