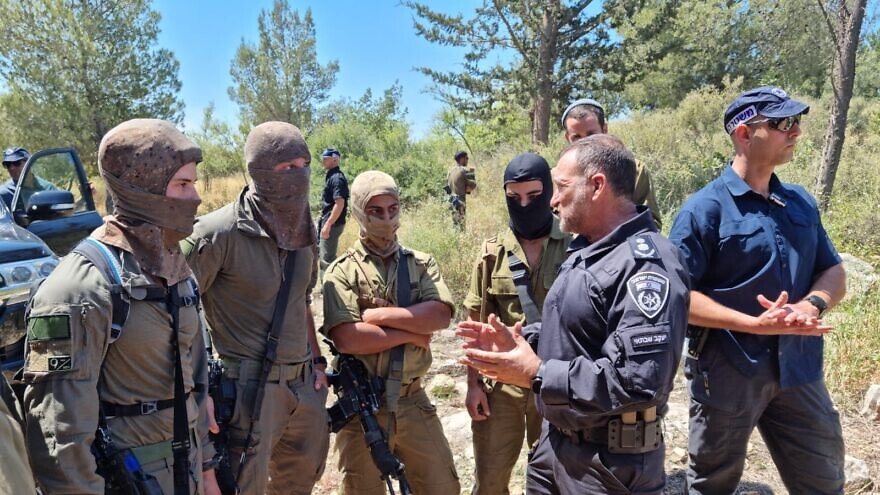 Israel Police Commissioner Yaakov Shabtai (second from right) talks with members of the Israeli forces participating in the search for the terrorists who murdered three people in the city of Elad on May 5, 2022, in this image posted on social media on May 8, 2022. Source: Israel Police Twitter.
Spread the word.
Help JNS grow!
Share now:

(May 8, 2022 / JNS) Israeli security forces have captured two suspects in connection with the deadly ax attack in Elad last week, according to a joint statement on Sunday by the Israel Police, Israel Defense Forces and Israel Security Agency (Shin Bet).

As’ad Yousef As’ad al-Rifa’i, 19, and Subhi Emad Subhi Abu Shqeir, 20, from the Palestinian village of Rumana near Jenin, were captured in a forest near Elad following a 60-hour manhunt, according to police. Channel 13 released video footage of the arrest.

After an initial medical check, the terrorists were transferred to the Shin Bet for questioning.

One of the suspects, the report said, left a will declaring his intention to murder and die “for Al Aqsa.”

Security forces broadened the hunt for the terrorists over the weekend, with police saying on Saturday that special forces and “advanced technological means, including various aircraft,” had been brought in to assist.

“Police helicopters and operational multirotor drones are scanning and broadcasting in real-time from the ground to the joint command post set up by the police’s Central District,” said police. The aircraft and drones directed units on the ground to any suspicious figures detected, the statement added.

The victims of the Elad terror attack, Yonatan Havakuk, 44, of Lod; Boaz Gol, 49, of Elad; and Oren Ben Yiftah, 35, of Lod, were laid to rest on Friday. Thousands attended the funerals. The three men leave behind 16 children between them.