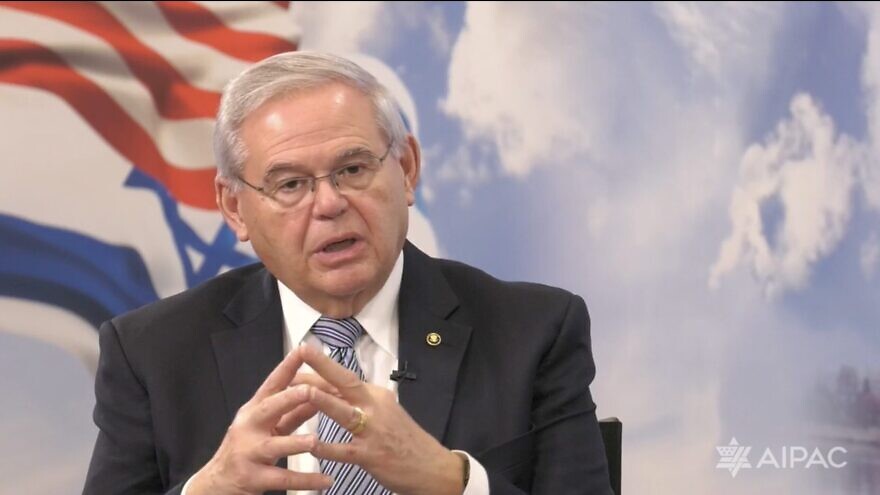 (February 18, 2022 / JNS) Senate Foreign Relations Committee chairman Robert Menendez (D-N.J.) sat down for an interview with AIPAC supporters on Thursday, focused on the latest in the ongoing indirect negotiations in Vienna between the United States and Iran to re-enter the Joint Comprehensive Plan of Action (JCPOA) and explaining the reasons that he prominently spoke on the issue on the Senate floor on Feb. 2.

Elliot Brandt, AIPAC’s managing director for national affairs and the presentation’s moderator, called Menendez a champion of the U.S.-Israeli relationship and a true friend of AIPAC.

Brandt began the discussion—sitting in a studio with Menendez connecting with an audience online—by showing a clip of Menendez during his speech where he calls on the Biden administration to enforce sanctions on Iran and not to allow Iran to coerce the United States into a bad deal.

Menendez said he made the speech because he felt that many of his colleagues had been focused on other global issues in recent weeks, such as the growing standoff between Russia and Ukraine, and were not paying attention to the direction the talks were taking.

“The challenges of Iran are clear and present. And so I wanted to revert the attention of my colleagues … and also send a message to the administration and our allies abroad, for which I’ve had discussions, about what is and is not going to ultimately pass muster here. What can get support and what cannot get support,” he said.

After the speech, Menendez noted that many of his colleagues from both sides of the aisle told him that they gained a lot from the speech.

Menendez was asked whether a “longer and stronger” nuclear deal with Iran was still possible, and if no deal was better than a bad one.

The senator said he doesn’t know if the talks in Vienna will end up with an agreement, and from everything that he’s heard, it would seem a stretch. Even U.S. Special Representative to Iran Robert Malley, according to Menendez, said that at some point, Iran will have delayed for so long that there would be no value in rejoining the agreement.

Menendez said that for him, no deal is better than a bad deal, and that the reason he made the speech on the Senate floor was that he felt that there was movement towards a deal that was weaker than the original one in 2015 that he opposed, which has sunset clauses for sanctions and restrictions that will begin kicking in as early as next year.

Despite taking a strong position against the original JCPOA, Menendez said that he opposed former President Donald Trump unilaterally leaving the deal in 2018, which helped allow Tehran to further enrich uranium to 60%, putting it closer to a nuclear weapon. But if re-entering the deal keeps Iran only six to seven months from creating a nuclear weapon in return for sanctions relief for Iran to convince them to re-sign, it would only make the deal weaker considering more sanctions relief comes as part of the sunset clauses.

The sanctions relief may also free up funds that Iran can use to continue its proliferation of conventional missiles and fund its terrorist proxies throughout the Middle East.

Menendez said that setting Iran back just six months fails to give the United States insight into how far Iran is from weaponizing its nuclear material.

If negotiators don’t come to an agreement, he said, America’s European allies will have seen that there was an effort to get Tehran back in compliance with the JCPOA and the international order—and that Iran did not comply—and they will hopefully cooperate to implement sanctions of consequence on the Islamic Republic.

‘Everybody will be in the same boat’

Another reason for his speech, he said, was to have his colleagues understand that there are options other than going back to a bad deal to stop Iran from passing the threshold of its nuclear material or conflict. He and Sen. Lindsey Graham (R-S.C.) have proposed a regional nuclear fuel bank, allowing Iran to receive fuel for peaceful energy purposes and medical research without enriching its own, which creates the infrastructure for a nuclear bomb.

He said that their initial conversations about the proposal with nations in the area, including Israel, have been positive.

“It’s about the regional concept, and it makes everybody safer, and we stop a nuclear race and a tinderbox to the world we can ill afford,” he said. “If Iran doesn’t choose to be part of it and others do, I think that it shows Iran for what many think it is—a country that is focused on obtaining a nuclear weapon, not just simply nuclear energy.”