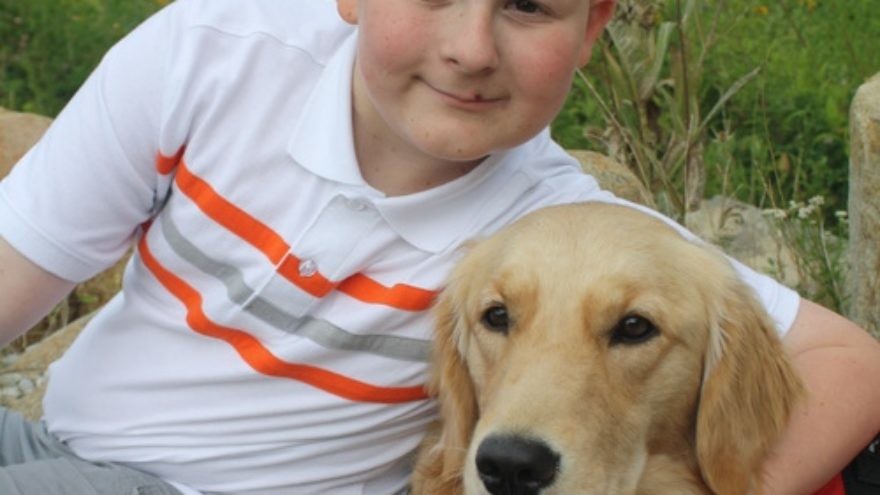 Dogs have long been known as man’s best friend. They’re snuggly, warm, and generally have a good sense of what their owners want. And some dogs give more than puppy love. Service dogs are trained to help people with disabilities such as visual or hearing impairments, seizure disorders, mobility issues, and diabetes.

William Snyder, a 12-year-old Jewish resident of Baltimore, suffers from seizures. His family raised $13,000 a few years back to purchase Asha from 4 Paws for Ability, a provider of service dogs; an additional $7,000 was donated to cover the cost. The labrador accompanies William to his school, sleeps with him, and even travels with the Snyder family on vacations. Before Asha joined the family, William would sleep on his parents’ bedroom floor, afraid of suffering from a seizure when no one was available to help.

“Asha can detect when a seizure starts and bark to get help,” says Ron Snyder, William’s father. “When help arrives, Asha will nuzzle up real close to William and comfort and protect him.”

Snyder recalls one evening when William suffered from a severe enough seizure that the family had to call 911. When the fire department came, Asha laid herself across William’s lap and refused to move.

Asha is also a working dog. She has a work uniform—a service dog vest—and is trained “to behave better than the kids do sometimes,” Snyder says.

“Just like glasses help William see, and his hearing aids help him hear, Asha helps him to be more independent,” says Snyder, noting that the family works to constantly retrain the dog so that she remembers her role.

4 Paws for Ability named Asha, but the name might also be derived from a Hebrew root—Asa—which means “healer.”

Benyamin Fleischman of Bethesda, Md., purchased a service dog a couple of years ago after suffering in 1999 from an accident that broke his spine and left him with limited mobility. At the time, he performed extensive research to determine what constitutes a service dog. He tells JNS.org that there are three criteria: 1) the dog must be well-behaved; 2) the dog cannot excrete in inappropriate places; 3) the dog must be able to perform at least one service for its handler.

Fleischman’s dog, Annie, helps open heavy doors for him and sometimes serves as a walking aid.

“I tell her, ‘firm,’ and she stands there and supports my weight so I can get up or down and out of a chair, or go from the floor to standing,” Fleischman explains. He has even trained Annie to locate an emergency cell phone so that if he becomes incapacitated, she can bring it to him and he can call for backup.

Though Fleischman rarely brings Annie to synagogue, he says she frequents his twice-a-week chavruta (one-on-one learning arrangement) with his rabbi. He has taken her to the kosher grocery store, too. There is nothing unique about being Jewish and having a service dog, he says, but there are Jewish laws pertaining to dog ownership that come into play when you have one. For example, Fleischman says, he cannot feed his dog meat and milk together or chametz (leavened products) on Passover. Jews who observe Shabbat need to consider whether they live inside an eruv (enclosure that allows carrying on Shabbat), which could lead to challenges regarding walking the service dog or picking up the dog’s feces outside. Also, some rabbis have ruled that dogs are muktza (forbidden to be touched) on Shabbat. But Fleischman says that in the case of service dogs, rabbis tend to be more lenient.

This was certainly the case for Haya Simkin, 27, from Kfar Saba, Israel, who bought a poodle guide dog for the blind from the U.S. She asked her rabbi if there would be any issues having such a pet, and he said no. She brings the dog, Pammy, with her to synagogue. The dog knows when to stand up or lie down at the right times during prayer services, according to Simkin.

“On Rosh Hashanah, she stood each time the shofar was blown,” Simkin says.

Bringing a dog from the U.S. to Israel had its share of challenges, she recalls. For starters, the sidewalks in Jerusalem are a lot more crowded than they are in California, where Pammy was trained. Upon arrival in Israel, the dog needed to learn to navigate lanes of people and baby strollers, pavement that is narrow and cracked, and obstacles like automobiles parked on the sidewalk. Pammy was also entranced by the cats.

“She loves cats. She would start barking and bouncing, and would get all perky and excited and wag her tail,” says Simkin. “That was hard.”

Additionally, some haredi Jews tend to be afraid of dogs, and they’ll freeze in the middle of the sidewalk or scream when they see them. Pammy has gotten used to it.

“You could say she had a rough aliyah,” Simkin says with a laugh. “Today, she guides me through obstacles very smoothly.”

According to Bracha Ben-Avraham of Moshav Ben Ami in northern Israel, owner of a guide dog named Dinka, there are about 250 partnerships between working guide dogs and Israeli citizens. Most of the guide dogs are owned by civilians, but roughly 30 to 45 of them are for veterans with disabilities, Ben-Avraham says.

In Israel, dogs are trained at the country’s one guide dog school, Israel Guide Dog Center for the Blind, where Ben-Avraham now works. She says Israelis have made great strides in accepting guide dogs, but that there are still sometimes scuffles between guide dog owners and bus or taxi drivers, or security guards.

“There is no public place where a guide dog is not allowed. A guide dog is [used] in place of a blind person’s eyes, and we have a legal right to bring these dogs wherever we go,” Ben-Avraham says, noting that unlike a white cane, which can also be an effective aid for visually impaired individuals, a guide dog encourages social contact. People jump out of the way of a white cane to avoid being hit.

Ben-Avraham says, “Most people, regardless of their disability, want to be independent.…A guide dog is the most independent way of getting around.”