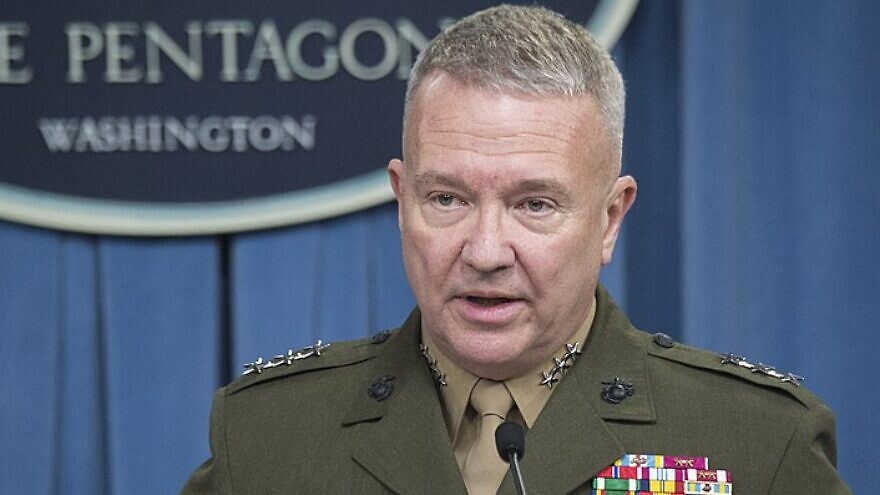 (November 25, 2021 / JNS) With negotiations over Iran’s nuclear program set to resume in Vienna next week, the top U.S. military commander in the Middle East says that should the talks fail, a military option is prepared.

The Iranians are “very close” to nuclear breakout, but President Joe Biden has vowed that the Iranians will not attain a nuclear weapon, Gen. Kenneth McKenzie, commander of U.S. Central Command, told TIME magazine.

“The diplomats are in the lead on this, but Central Command always has a variety of plans that we could execute, if directed,” he said.

The Joint Commission of the Joint Comprehensive Plan of Action (JCPOA) nuclear agreement is scheduled to convene in Vienna on Nov. 29. Britain, China, France, Germany, Russia and Iran will be represented, according to an E.U. statement. The meeting is to be chaired by Enrique Mora on behalf of E.U. foreign policy chief Josep Borrell.

The United States, which unilaterally exited the JCPOA in 2018 under then-President Donald Trump, will not directly participate in the talks, at Iran’s request, according to the TIME report.

Iran has pushed ahead with its nuclear program since 2018, and U.S. officials have warned that its advances towards achieving a nuclear weapon risk making a return to the 2015 agreement impossible.

In a Bloomberg interview that aired in September, U.S. Special Representative to Iran Robert Malley said, “We can’t wait forever as Iran continues its nuclear advances, because at some point their advances will be such as to make a return to the JCPOA much less valuable to the U.S. than it would otherwise be.”

The United States was prepared to be patient, said Malley, but added, “let’s not drag this on for too long, because at some point, we’ll have to reach a different conclusion.”

Nor has Iran halted its advances in the runup to the resumption of talks in Vienna.

At the International Atomic Energy Agency Board of Governors meeting on Wednesday, U.S. Chargé d’Affaires Louis L. Bono warned in a statement that “Iran’s escalatory advances beyond JCPOA limits continue unabated. Iran continues to install and operate numbers and types of centrifuges not permitted under the deal, and to produce quantities and enrichment levels of uranium far beyond the JCPOA’s limits.”

In particular, Bono called on Iran to allow the IAEA to install replacement cameras at a facility in Karaj where centrifuge components are manufactured, stating that gaps in monitoring at the site were endangering a return to the JCPOA. He said that as the gap in monitoring at the site grows, “Resumption of mutual compliance with the JCPOA will be increasingly difficult.”

“Iran must permit the IAEA to install replacement cameras to monitor centrifuge component manufacturing at the Karaj complex immediately, and should clarify the status of the missing data storage medium and recording unit previously reported by the [IAEA director general],” he said.

Bono also singled out Iran’s work with uranium metal and enrichment of uranium to 6o percent U-235 as particularly troubling, stating: “Iran has no credible, peaceful need to undertake these activities, which have direct relevance to nuclear weapons development.”

Iran itself has stated that only countries with nuclear weapons have taken such steps, he noted.

The facility in Karaj is the Iran Centrifuge Technology Company, or TESA, a main manufacturing center for the uranium-enrichment centrifuges used at the nuclear facilities in Fordow and Natanz. The site was damaged in June by what Iran has called an act of Israeli sabotage. In February, IAEA Director-General Rafael Grossi traveled to Iran to try to stave off implementation of Iranian legislation that, among other things, sought to curtail inspections of Iran’s nuclear sites and the collection of surveillance-camera footage.

Grossi managed to reach a “stopgap” arrangement that would allow IAEA cameras to keep running, so that in the event of a return to the JCPOA, signatories would be able to “piece together what had occurred during the period when [the deal] lapsed,” according to NBC. However, Iran contends that following the alleged Israeli attack on the Karaj facility, IAEA inspectors could not be granted access to replace the surveillance equipment due to the ongoing investigation at the site.

Speaking a day after a trip to Iran for talks on a range of nuclear-related issues, Grossi said that no progress had been made with regard to monitoring at the Karaj facility. The agency would soon be unable to guarantee equipment was not being diverted from the site to make nuclear weapons, he said, according to Reuters.

In fact, the IAEA chief told NBC News on Oct. 23, Tehran’s refusal to allow inspectors to service surveillance equipment at Karaj had already resulted in a gap in monitoring at the facility.

“We are close to the point where I would not be able to guarantee continuity of knowledge,” Grossi told a news conference Wednesday.

Grossi said that the IAEA still does not know whether Karaj is operational, five months after the alleged attack.

“It is obvious that such a long period of time without us getting access, knowing whether there are operational activities ongoing, is something that in itself would at some point prevent me from continuing to say, ‘I have an idea of what is going on,'” he said.