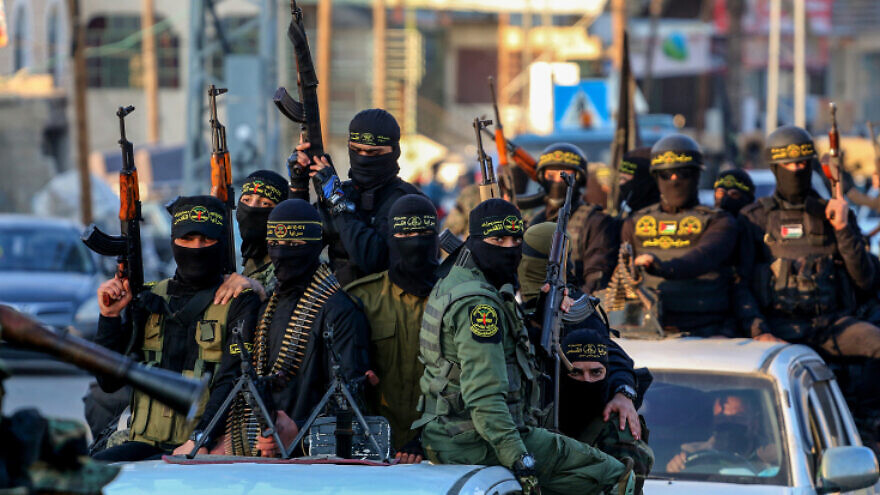 (February 1, 2022 / JNS) A relatively small event—a Jan. 22 protest by the Iran-backed Palestinian Islamic Jihad (PIJ) in the Gaza Strip in support of another Iranian proxy, the Houthis—revealed a burgeoning problem for Hamas as the march unleashed a torrent of anti-Hamas rhetoric on social media in Gulf states, including Saudi Arabia, Kuwait and the United Arab Emirates. The reaction, analysts tell JNS, is further indication that the terror group is losing sway in these countries.

At the Gaza demonstration, dozens of PIJ protesters marched in solidarity with the Houthis after the Yemen-based group attacked the UAE in a drone strike, killing three and wounding six. (It has launched two more attacks since.) The protesters shouted, “Death to the House of Saud.” The Saudis are leading a coalition against the rebel group.

Although Hamas didn’t participate and quickly distanced itself from the protest—announcing that the demonstration didn’t “represent our position and policy”—it was nevertheless blamed for the action.

“I have never heard this level of hatred echoed on social media as I have immediately after this march,” Orit Perlov, a researcher at the Institute for National Security Studies (INSS) who analyzes social discourse in Arabic-speaking countries, told JNS. “For two days, there was anti-Gazan, anti-Hamas anger on social media in Kuwait, the UAE and Saudi Arabia, even though the march was organized by Palestinian Islamic Jihad.”

The social-media rhetoric revolved around themes of Palestinian ingratitude, hypocrisy and treachery. “Last Ramadan, they asked us for food and then they yell ‘Death to Saud’ and ‘Death to the UAE,’ ” said Perlov, describing a typical message.

Hatred towards Hamas among Gulf States lay beneath the surface for some time, she said. What is new and what the Gaza protest brought to the fore is a willingness to speak about it.  “What was once said behind closed doors is now said in the open. They didn’t have a problem saying bad stuff about the Palestinians before, but it was behind the scenes.”

Even in Kuwait, in which half the parliament are Islamists, the social-media hostility “escalated very fast” with people calling for the closure of the Palestinian embassy, said Perlov, noting that in Kuwait, social-media users tried to draw a distinction between the Palestinian cause and Hamas. However, in Saudi Arabia, the case was different. An informal Twitter poll by Saudi paper Al-Arabiya asking, “Do you still support the Palestinian cause?” found that 97%, or some 32,000 people, said, “not anymore.”

“Hamas made a huge mistake allowing this march to happen,” said Perlov. “It absolutely relies on Gulf money.”

‘Unraveling of some of support’

Jonathan Schanzer, senior vice president of research at the Washington, D.C.-based Foundation for Defense of Democracies, agreed, telling JNS that “there are these moments of miscalculation that we see from time to time.”

“Hamas is utterly reliant upon patrons in order to survive,” and this recent miscalculation reminded him of when former Palestinian Liberation Organization leader Yasser Arafat backed Iraqi leader Saddam Hussein in his war against Kuwait.

“When you throw your support behind the Houthis, what you’re basically saying is that you support the violent activities, the bloodshed in Yemen, the attacks on Saudi Arabia, the attacks on the UAE and the overall relationship with Iran,” he said. “A lot of these pragmatic Gulf states have had it with all of Iran’s proxies. They’ve had it with the seemingly endless violence and the instability that these actors bring to the region.”

Schanzer, author of a book on the 11-day conflict last May between Israel, Hamas and PIJ in the Gaza Strip, said that anti-Hamas sentiments on social media were already making themselves manifest then, by what he said were likely state efforts to mute pro-Hamas hashtag trends. “One began to get a sense during the war that a number of these Gulf Arab states … were not willing to allow this issue to drive their foreign policy,” he said.

“What we’ve been watching steadily now is the unraveling of some of the support that Hamas has traditionally received,” he added.

Schanzer stressed that the main factor driving a wedge between Hamas and the Gulf States is the latter’s antipathy towards Iran. That antipathy was a key impetus for the Abraham Accords, the agreement signed in late 2020 between Israel and several Muslim states.

Perlov, who traces the widening splits now being seen in the region further back to the Arab Spring in 2011, said that the Abraham Accords made the Palestinians realize that their cause was no longer the top concern among Arab states. “In the past, all the Arab states said that until you find a solution regarding the Israel-Palestinian conflict, we can’t normalize relations with Israel.”

The accords also acted as a watershed on social media, she said, freeing Gulf State populations to express themselves more openly about Palestinians and Israel, something that set the stage for the current eruption of anti-Hamas rhetoric.

She noted that the change offers an opportunity for Israel to promote its narrative. “There is a vacuum now in which more are willing to be pro-Israel.”