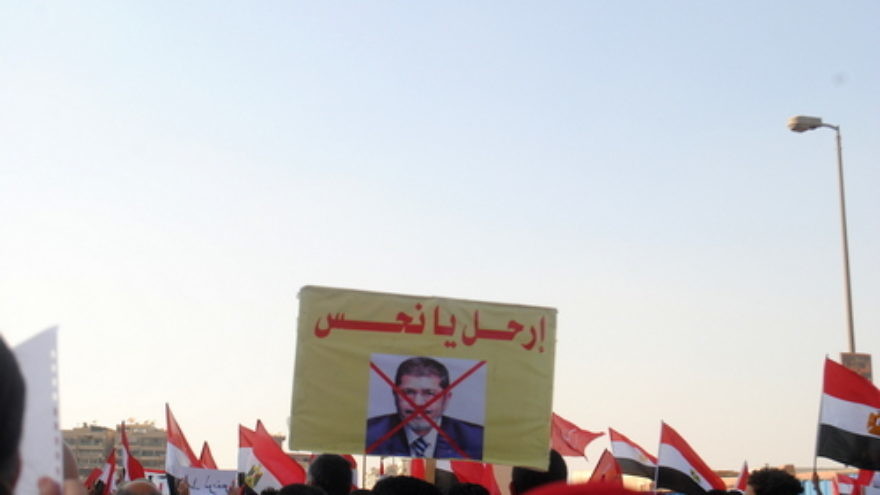 After the Muslim Brotherhood did not overturn Egypt’s 1979 peace deal with Israel during its term in power, the liberal group that began the push to remove the party from power has begun collecting signatures in efforts to rescind the agreement.

The Tamarod (rebellion) movement, a grassroots effort to register opposition to now-deposed president Mohamed Morsi and force him to call early elections, helped launch the July 2013 protests in Egypt, which preceded the consequent military removal of Morsi. The same group is now demanding that Egypt sever ties with Israel as part of a wider campaign seeking to end dependence on U.S. aid, in light of recent sanctions imposed by Washington on the Egyptian army.

Tamarod is calling for a reversal of the 1979 peace agreement with the “Israeli entity, which is binding the hands of Egypt’s security forces in Sinai.” The movement’s activists wish to reformulate Egyptian security agreements with Israel in a way that will “ensure Egypt’s right to secure its borders.” According to the organizers of the new Tamarod petition, the petition has so far garnered more than 300,000 signatures.

Israel is closely monitoring the initiative. According to an anonymous official who spoke to Israel Hayom, “The fact that there are groups in Egypt trying to promote the issue, specifically now, and that they are calling themselves ‘liberals,’ suggests, more than anything, that their priorities are out of order and bizarre. Even if there is a public demand, the Egyptian leaders, regardless of their affiliation, are well aware of the interests that would best serve the Egyptian people.” Last Friday, the Israeli cabinet convened for a briefing on the topic.

Israeli Prime Minister Benjamin Netanyahu has instructed Israeli ministers and top government officials not to comment on the ongoing turmoil in Egypt, Army Radio reported Sunday. Media outlets, however, reported over the weekend that Israel was maintaining close ties to Egyptian Defense Minister Col. Gen. Abdel Fattah el-Sissi, who led the military’s overthrowing of Morsi. Western diplomats quoted by the New York Times said that Israel had promised Sissi that the U.S. would not cut off aid to his country.

“General Sissi and his circle appeared to be in heavy communication with Israeli colleagues, and the diplomats believed the Israelis were also undercutting the Western message by reassuring the Egyptians not to worry about American threats to cut off aid,” the New York Times reported on Saturday.

Jerusalem did not issue an official response to the report.

The Egyptian government, meanwhile, announced it had begun deliberations on whether to ban the Muslim Brotherhood, a long-outlawed organization that swept to power in the country’s first democratic elections a year ago.

For more than a month since the July 3 military overthrow of Morsi, Muslim Brotherhood members and supporters have attacked and torched scores of police stations and churches in retaliation. Shops and houses of Christians have also been targeted.

Such attacks spurred widespread public anger against the Brotherhood, giving the military-backed government popular backing to step up its campaign against the Islamist group. It reminded people of a decade-long Islamist insurgency against Hosni Mubarak’s rule in the 1990s, which only strengthened security agencies and ended with thousands of Islamic fundamentalists in prisons.

The unrest in Egypt has raised international concerns over the country’s stability, and prompted U.N. Secretary General Ban Ki-moon on Saturday to condemn both the “violent protests,” in reference to Brotherhood’s rallies, and the Egyptian authorities’ “excessive use of force.”

The Muslim Brotherhood, founded in 1928, came to power in the summer of 2012, when Morsi was elected in the country’s first free presidential elections. The election came after the overthrow of Mubarak in a popular uprising in 2011.

The fundamentalist group has been banned for most of its 85-year history and was repeatedly subjected to crackdowns under Mubarak’s rule. Disbanding the group, experts say, would mean allowing security forces to have a zero-tolerance policy in dealing with its street protests, as well as going after its funding sources. That could be a serious blow to the Brotherhood, though it likely wouldn’t mean an end to a group that existed underground for decades.

While the possible Muslim Brotherhood ban was being debated, the Brotherhood itself floated a new theory—that General Sissi “is actually a Jew.”