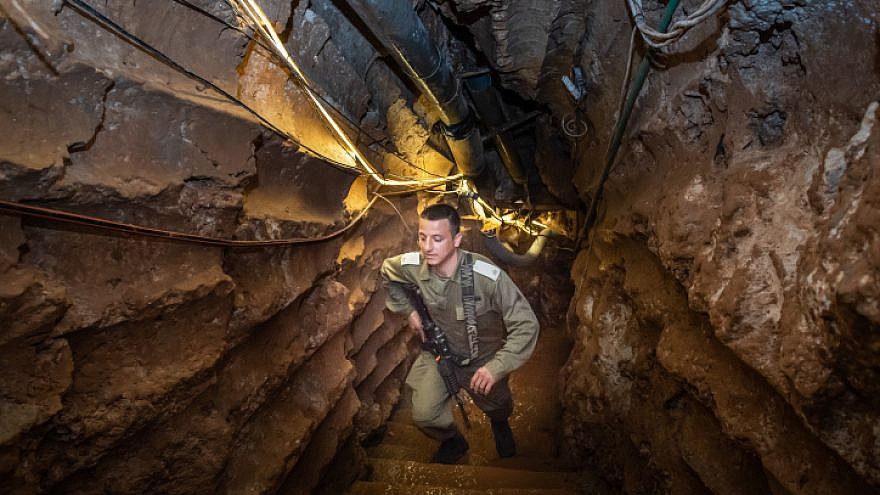 An Israeli soldier stands in a Hezbollah tunnel that crosses from Lebanon to Israel, on the border between Israel and Lebanon in northern Israel, on May 29, 2019. Photo by Basel Awidat/Flash90.
Spread the word.
Help JNS grow!
Share now:

(December 16, 2019 / Israel Hayom) Infiltration tunnels are a serious threat and will play a major part in the next armed conflict on Israel’s northern and southern borders, a senior Israeli military official said on Sunday.

Edelstein was speaking at a symposium titled “Subterranean Challenges in War and Peace,” hosted by the Interdisciplinary Center Herzliya in collaboration with the United States Military Academy and the U.S. embassy in Israel.

“There is a need to change many of the basic assumptions. The enemy wants to force us to operate above and below ground at the same time, in order to exhaust us and lead to further attacks against civilians,” he said.

Edelstein noted that tunnels greatly complicate urban warfare scenarios, as buildings that have been cleared of hostiles could still pose a risk due to concealed tunnel exits. And tunnel warfare, he emphasized, is here to stay.

“If in the past there was the question of whether we could counter the terror tunnels without entering them—we won’t have this privilege in the future. There is a 100 percent chance that we will face the challenge of the tunnels in Gaza and in Lebanon.”

However, the tunnel threat was particularly severe in the northern sector, he said.

“Every village [in southern Lebanon] has tunnels,” he said, adding that the IDF is sparing no effort to meet this challenge.

Tunnel warfare poses special challenges to modern armies, said Edelstein, because it negates many of the advantages state forces have over non-state actors.

“Tunnel warfare reduces nearly all the advantages you have when fighting above ground to almost zero, be it with respect to firepower, engaging the enemy, and the troops’ movement,” he said.

Furthermore, he explained, locating and neutralizing tunnels requires the cooperation of many branches of the military.

“One of the problems is that we don’t have the intelligence capability to discern the location of each and every tunnel. No one unit can handle locating a tunnel and neutralizing it—we need an entire strategic lineup for that,” he said.