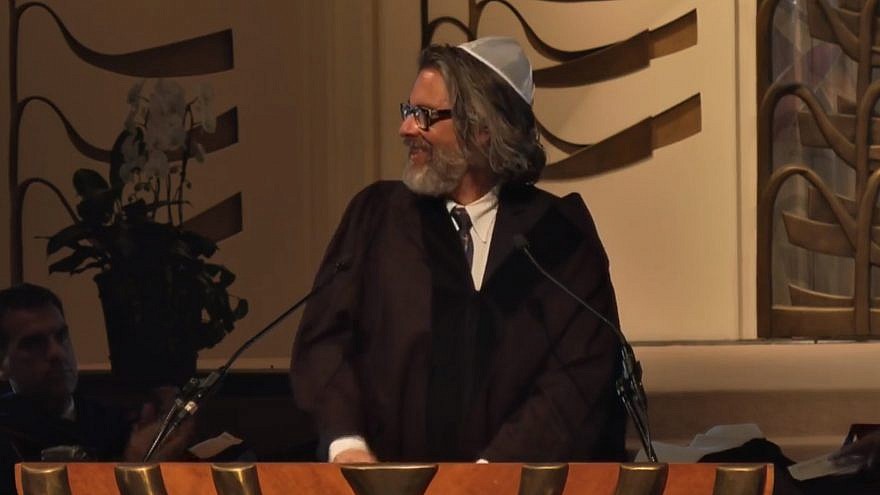 (June 5, 2018 / JNS) Author Michael Chabon ignited controversy in the Jewish world following his May 14 commencement speech at the Hebrew Union College-Jewish Institute of Religion in Los Angeles with students and prominent Reform rabbis criticizing the Pulitzer Prize-winning novelist for his take on Jewish inner-marriage and various Israeli security policies.

“Security is an invention of humanity’s jailers,” he said to the audience of young people. “Anywhere you look, it is and has always been a hand of power drawing the boundaries, putting up the separation barriers, and propagandizing hatred and fear of the people on the other side of the wall. Security for some means imprisonment for all.”

While many congregations within the Reform movement accept and sometimes even facilitate intermarriage, Chabon expressed views against marrying in, despite having a Jewish wife. “Endogamous marriage is a ghetto for two,” he said. “It draws a circle around the married couple, inscribing them and any children who come along in the figurative wall of tradition, custom, shared history and a common inheritance of chromosomes and culture.”

Chabon later said he sees intermarriage of all types as “the source of all human greatness,” adding that “any religion that relies on compulsory endogamy to survive has, in my view, ceased to make the case for its continued validity in the everyday lives of human beings.”

Rabbi Jeffrey Salkin, senior rabbi of Temple Solel in Hollywood, Fla., and a prominent blogger on religionnews.com, said of his alma matter and that speech, “HUC had every right to invite him. But I found the speech deeply troubling, not only because of its over-the-top criticism of Israel, but because he seems to have no real juice for Judaism.”

To JNS, he said, “He continually advocated a world without borders and without distinctions. In that sense, he is calling for the disappearance of Judaism.”

Even more, Salkin added that “he has rendered dark and sour judgments against Judaism itself, especially the Judaism that the Reform movement upholds. If he speaks of a world without distinctions, then what does that do to Reform Judaism’s quest for social justice? If there is no distinction between right and wrong, between ethical and unethical, if you sing ‘kumbaya’ with everyone, then it impedes our hunger for the good.”

Chabon, he said, “was singing his own literary version of John Lennon’s ‘Imagine.’ The only trouble is John Lennon sang it better.”

“You might just as easily seek intellectual guidance from a pro-football star. But as I do not expect him to have spectacular opinions on household detergents, neither do I expect him to have quotable opinions on the state of Judaism and the world. His role was not to give voice to what many Jews believe; it was to inspire Jewish professionals who were embarking on their careers. While I admire him as a writer, as a Jewish thinker, he leaves a lot to be desired,” maintained Salkin.

Morin Zaray, a recent graduate of HUC’s master’s program in nonprofit management, left the ceremony in protest. In her op-ed in the Jewish Journal of Los Angeles, she denounced HUC for inviting Chabon and critiqued Chabon’s reductionist anti-Israel rhetoric.

“For someone who presents himself as an intellectual—steeped in nuance—Michael Chabon has a remarkable ability to present a one-dimensional reality in which the Jews are evil oppressors and the Palestinians are powerless victims, with no agency, no responsibility and no blame,” wrote Zaray. “Such a careless disregard for depth and complexity dishonors an institution of higher learning—particularly a Jewish one—particularly on a graduation day.”

In the face of the ensuing criticism by Zaray and other leaders in the Reform movement, Rabbi David Ellenson, interim president and chancellor emeritus, and Joshua Holo, dean of the Los Angeles campus of HUC-JIR, defended their decision to bring Chabon to campus, maintaining that speakers with a wide variety of ideologies are invited to the campus, and that Chabon is a “moral voice” that embraces Israel and its need for security.

“Embrace of disagreement is an expression of HUC’s academic mission,” they said in a statement published in JTA, praising the “energetic, fearless marketplace of ideas.”

While they acknowledged that “it pains us to have offended some in our audience,” they also posited, “What greater civic responsibility for a Jewish institution of higher learning than to encourage public conversation on knotty problems of great Jewish moment?”

But other  Reform rabbis have named other civic responsibilities, such as the continuation of the Jewish people and inspiring Jewish professionals embarking on their careers.

‘It should be of great concern to us’

Rabbi Michael Boyden, religious leader and founder of Kehilat Yonatan Reform Congregation in Hod Hasharon, Israel, and former founding rabbi of the Ra’anana Reform Congregation, said in a Times of Israel article that Judaism’s distinctions and divisions, which Chabon criticized as “insularity, exclusion and segregation,” are precisely a prerequisite for survival.

“There was something uncannily symbolic in the fact that the flimsy, ill-fitting kippah that the writer, Michael Chabon, wore fell off his head in the middle of his presentation,” he said.

“The views that Chabon expressed are shared by many Jews, particularly younger Jews who question the need to remain within the Jewish fold, but also the policies adopted by the State of Israel in terms of dealing with the conflict that we have with the Palestinians,” explained Boyden. “His presentation, rather than persuading anyone, is more reflective of issues that exist within the Jewish world, and it should be a great concern to us.”

As a religious movement, he maintained, “we are interested in preserving and strengthening the Jewish people. But Chabon’s views on intermarriage, according to Boyden, will ensure the opposite.

“All of the surveys I’ve ever seen show very clearly that the chances of children being raised as Jewish is considerably less when the parents do not share the same religious background,” continued the rabbi. “As a consequence, people interested in a Jewish future will seek either Jewish partners or those who are interested in converting to Judaism.”

And this, he stated, “will ensure the future of our heritage.”