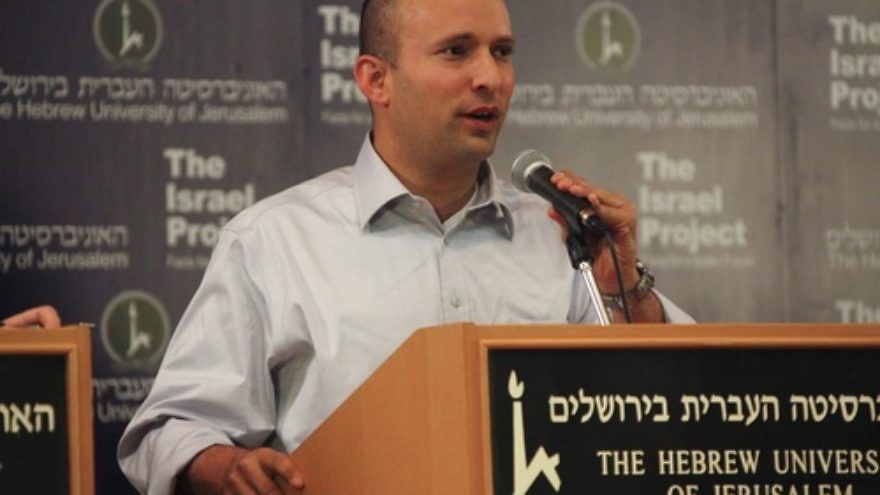 As both Haredi political parties in Israel—United Torah Judaism and Shas—are currently in the opposition, the Jewish Home party is the only representative of religion in the governing coalition. To address its multifaceted objectives, the party engages in several fronts that often come into conflict with one another. Trying to carry the heavy burden of religion alone, members of the Jewish Home are often adopting positions on religious matters in order to avoid seeming too stringent for their nationalist modern-Orthodox constituency or less religious than the Haredim.

Formed in 2008, the Jewish Home is the reincarnation of several mergers and splits between different religious-Zionist parties. The roots of the party can be traced to the Mizrahi party (acronym for Merkaz Ruhani or Spiritual Center), which was formed by Rabbi Ya’akov Reines in 1902 and played an active role in the Zionist Congress. Today, the Jewish Home represents the worldview of mainly modern-Orthodox, religious-Zionist Israelis as well as some non-religious nationalists.

Tensions among proponents of religious Zionism have been endemic to the movement since its inception. As Zionists, they rebelled against the old political structure of the Jewish community in the diaspora and sought to establish Jewish self-determination in the land of Israel. As a byproduct of traditional Judaism, they tried to synthesize their national vision with Orthodox Judaism, which opposed the establishment of a Jewish polity in the land of Israel before the arrival of the messiah, and therefore considered Zionism heretic. Such tensions have led to ongoing rivalries within Mizrahi, resulting in the departure of some of the movement’s members to form the Haredi party Agudat Israel in 1912.

Before the first elections for the Jewish governmental institutions in Mandatory Palestine in 1920, the representatives of Agudat Israel threatened to secede from any decision-making process if women were allowed to vote. According to historian Anita Shapira, the Mizrahi party, in whose institutions women voted and were elected, might have found itself as the sole representative of religion in pre-state Israel (Yishuv). The Yishuv’s leadership was concerned that an intra-Jewish conflict would result in a social rupture, compelling the Mizrahi to take extreme positions on religious matters in order to avoid seeming less religious than Agudat Israel.

As the only religious party in the current coalition, the Jewish Home attempts to strike a balance between these mutually hostile views by trying to adhere to all sides. The result is an ideological overexpansion that exhausts the party and positions it in a political limbo. Owing much of its success in the 2013 elections to its promise to promote social equality and a “friendlier” Judaism in state institutions as an alternative to the Haredi version, the Jewish Home is pressured to meet the expectations of its modern-Orthodox and non-religious nationalists’ constituencies. Simultaneously, however, the party’s ties to traditional Judaism have remained deep.

As a nationalist party, the Jewish Home seeks to meet its voters’ demand for greater social equality in the forms of Haredi conscription to the military, cutting state funds to Haredi institutions, and breaking the Haredi monopoly over religious-personal matters. As a religious party, it is pressured to demonstrate a commitment to the rabbinic study of Torah in Israel by securing state funding to Haredi yeshivas and maintaining a considerable number of exemptions from military service for young Haredi men.

The Jewish Home took an active role in the Equality in Burden law, recently passed legislation that aims at conscripting Haredi men to a military or national service. But in negotiating the law with its coalition partners, the party secured the special arrangement of many religious-Zionist and national-religious yeshiva students. Under the new law, the service of these students has been extended by a single month to 17 months, in comparison to the 36 months that secular Israelis must serve. Nevertheless, these students will continue to enjoy a soldier’s full financial benefits for 4.5 years.

Recently, the party supported a new law that allows couples to choose the rabbinate that will register their marriage, even if it is not located in the municipality where the couple resides. The main purpose of the law is to incentivize better rabbinic services and provide additional review on problematic cases of conversions. Furthermore, holding the portfolio of the Ministry of Religious Services, the Jewish Home has demonstrated an unprecedented support for the recognition of the Conservative and Reform denominations in Israel, securing them some state funding on the municipal level.

But traditionally, all religious-Zionist parties—the Jewish Home included—seek to further cement the Orthodox Chief Rabbinate’s monopoly over marriage, divorce, and conversion in Israel. Despite its flirtations with the liberal denominations, the Jewish Home will fiercely oppose any non-Orthodox jurisdiction on personal matters in Israel.

As part of its coalition agreement, the party has the right to veto any legislation that concerns religion and state. For example, the party is expected to oppose a new bill that aims to make the process of converting to Judaism easier, by increasing the number of rabbis authorized to approve conversion and the number of religious courts. Thus, while the Jewish Home advocates a bureaucratic reform to polish the Chief Rabbinate’s poor reputation and make its services more appealing to Israelis, it will outright object to any changes that involve a more flexible interpretation of Jewish law in religious courts.

The convergence of these conflicting ends, the party’s average electoral size, and its status as the only representative of religion in the coalition forces the Jewish Home party to position itself at the complicated crossroad of traditionalism, modernism, nationalism, and liberalism. Thus, while the Jewish Home played an active role in recent legislation concerning the status of religion, its multiple agendas prevent it from leading structural changes in the relationship between religion and state in Israel. As history may suggest, despite their ideological animosity with non-Zionist Haredi Orthodoxy, religious-Zionist parties operate more comfortably when their Haredi rivals are in the coalition to help them carry the heavy burden of religion in Israel.

Moran Stern is a lecturer at Georgetown University’s Program for Jewish Civilization in the School of Foreign Service. Follow him on Twitter @MoranStern.