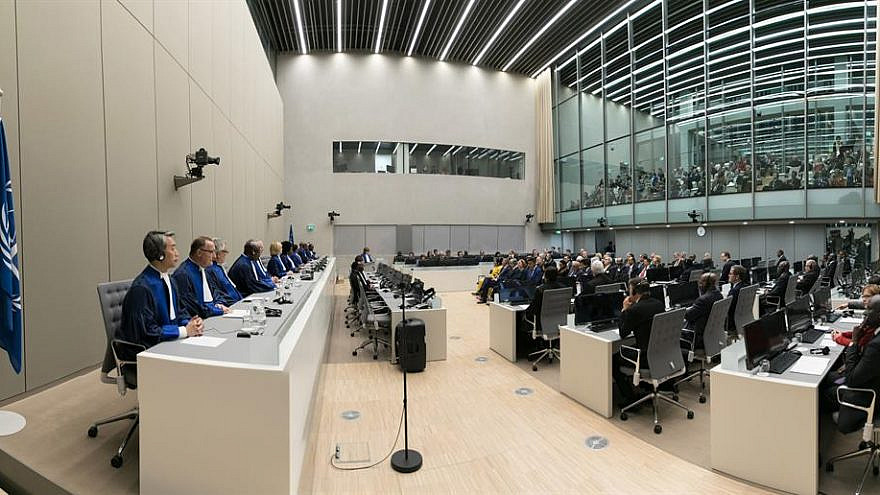 The judges of the International Criminal Court and eminent guests at the opening of the ICC judicial year on Jan. 18, 2018. Credit: ICC-CPI.
Republish this article
1420 WORDS
Spread the word.
Help JNS grow!
Share now:

(April 8, 2021 / Begin-Sadat Center for Strategic Studies) The International Criminal Court’s Feb. 5 decision that it has jurisdiction to investigate alleged war crimes in the Gaza Strip, the West Bank and eastern Jerusalem represents a milestone in the politicization of international law.

It is also a milestone in the international campaign to delegitimize the State of Israel by placing it on the same level as terrorist armies such as Hamas and Palestinian Islamic Jihad.

“The Court, established as a court of last resort to prosecute the most heinous atrocities, was never meant to target democracies such as Israel. It is worrisome that Israel, as a democracy with a heritage of respect for international law, and Hamas as a terror organization that defies international law, are being assessed by the Prosecutor on an equal footing.”

The investigation by the ICC prosecutor, which will get underway in the coming months, raises the disturbing prospect of future indictments—and arrest warrants—being issued against senior Israeli military personnel and officials, an outcome that could potentially restrict the movements of a sizable number of Israelis.

The ICC’s 2-1 Pre-Trial Chamber decision overlooks the fact that Israel has an independent and robust judiciary, fully capable of investigating any suspected violations of the laws of armed conflict. It also dismisses Israel’s unprecedented efforts to uphold those laws in the face of adversaries whose entire modus operandi is to violate them.

In contrast to the decision on Israel, in December 2020, ICC Prosecutor Fatou Bensouda said there was “reasonable basis to believe” that British military forces committed atrocities in Iraq, but decided against opening an investigation because Britain possessed adequate investigative capabilities (no British investigations resulted in criminal prosecution). Bensouda ends her term in June, and her successor has been named as British human rights lawyer Karim Khan.

The Chamber’s ruling is based on the eligibility of “Palestine” to accede to the Rome Statute, described by Bar-On as “the foundational document of the ICC.”

“The bottom line is that the Chamber decided that, under these circumstances, it may not review or challenge the eligibility of ‘Palestine’ to accede to the Rome Statute,” said Bar-On.

“The question of whether and how an entity becomes an internationally recognized state in international law is complex and intricate. The majority’s analysis on this issue is almost technical, relying on the process of accession to the court as the sole criterion in deciding whether ‘Palestine’ can be a state that can refer its jurisdiction to the ICC,” he said.

“And so, an array of ‘technical’ acts creates a situation in which ‘Palestine’ enjoys a status that should be reserved to sovereign states, without meeting the required standards for this to happen. This outcome does not comport with the most basic foundation on which the ICC was established, that only sovereign states that are recognized as such in international law can delegate sovereign jurisdiction to the ICC,” he added.

Meanwhile, professor Boaz Ganor, founder and executive director of the International Institute for Counter-Terrorism in Herzliya, highlighted the repeated failure of international law to adjust to the challenges created by hybrid terror organizations.

Defining hybrid terror organizations as entities that control populations and territories, such as Islamic State during its Caliphate days in Iraq and Syria, or present-day Hamas in Gaza and Hezbollah in Lebanon, Ganor noted that “they embed themselves in civilian populations and use civilians, even children, as living shields.”

It is time for the international community to formulate new, updated laws of war, Ganor said—ones that place “blame on harm to civilians first and foremost on those who use them cynically as living shields.”

None of this means that liberal democracies are not obligated to do all that they can to avoid harm to civilians, he stressed, and to act in line with the two pillars of the laws of armed conflict: discernment between combatants and non-combatants, and proportionality.

When engaging adversaries that plant weapons and rockets under residential buildings, hospitals and schools, and then fire indiscriminately at Israeli civilians, the IDF has gone further than any other Western military to strive to balance its obligations to ethical combat and to protect the lives of Israeli citizens.

These extensive measures include the well-known “roof knock” tactic (dropping empty munitions on the roofs of structures to warn inhabitants to evacuate), warning calls, text messages and leaflets—all of which sacrifice the element of surprise in order to give civilians an opportunity to vacate a strike zone.

“The nature of large-scale armed conflict in crowded civilian areas means that mistakes occur, but the IDF always investigates these errors, and where necessary, places soldiers or officers who were negligent on trial,” said Ganor.

“Despite all of the above, the ICC in The Hague decided that it would be right to investigate the IDF’s activities in Gaza. Out of all of the militaries in the Middle East who are in combat situations, such as the Syrian, Iraqi, Turkish or Lebanese militaries, or the various militaries in Africa, and even Western militaries that have fought in Afghanistan, Libya, Iraq and other areas, the ICC chose to investigate the IDF. This decision teaches more about the ICC’s bias, its double-standard policy, and, more than anything, the lack of relevancy of this court,” he said.

Bar-On went on to note that protests and outrage are not policy, and that Israel will need to conduct strategic countermeasures in both the diplomatic and legal spheres.

“Diplomatically, Israel should remember that it is not alone in this battle. During the proceedings before the Chamber, it gained the support of seven important states that supported its legal views before the Chamber,” including the United States, Canada and Australia, he said. “Israel should work closely with the Biden administration and coordinate responses to the Chamber’s decision. The ongoing investigation against the activities of U.S. forces in Afghanistan makes Israeli and American interests (and indeed, those of all other Western democracies) in this respect very similar,” he added.

Bar-On called special attention to the ICC Prosecutor’s decision to investigate Israeli settlement activities in the West Bank and eastern Jerusalem, calling that decision a source of “major concern.”

Israel’s Supreme Court has heard thousands of cases relating to the settlements and dealt with many complex legal issues since Israel captured the area in 1967, but the state has never criminally prosecuted settlement-related acts because it does not view such activities as illegal. Israel now faces a “fierce legal battle in this arena,” warned Bar-On.

Ultimately, he said, “It is easy to understand why Israel, as the national homeland of the Jewish people, with the horrendous atrocities that befell it in World War II, was one of the main proponents of the establishment of the ICC. Unfortunately, political manipulations that dragged the Statute of the ICC away from its intended course made Israel decide not to become a State Party in the court. Israel’s concern that the court would be weaponized for political purposes is now materializing, with the Chamber’s decision to allow the prosecutor to investigate Israel without its consent.”

Earlier this month, Israeli Defense Minister Benny Gantz called the ICC’s decision “a prize to terrorism and to terrorist organizations,” adding, “The Palestinians must internalize [that] the conflict between us will be resolved only through negotiations in Jerusalem and Ramallah. No court will help, even in The Hague.”

Gantz added that “our enemies are acting in an immoral manner that endangers their residents—Hamas and Hezbollah hide missiles in the basements and yards of homes and use the civilians of Gaza and Lebanon as human shields. While our enemies run over human rights and while in the entire world terrible crimes are committed, the ICC prosecutor in The Hague decided to investigate Israel.”

Israel has strong independent investigation and judicial systems, said Gantz, “and one of the highest moral standards in the world … We will continue to fight to safeguard the citizens of Israel wherever necessary, and at the same time, we will fight the legal and political battle against this scandalous, bad decision.”

Yaakov Lappin is a Research Associate at the Begin-Sadat Center for Strategic Studies and a military and strategic affairs correspondent. He conducts research and analysis for defense think tanks and is the military correspondent for JNS. His book “The Virtual Caliphate” explores the online jihadist presence.