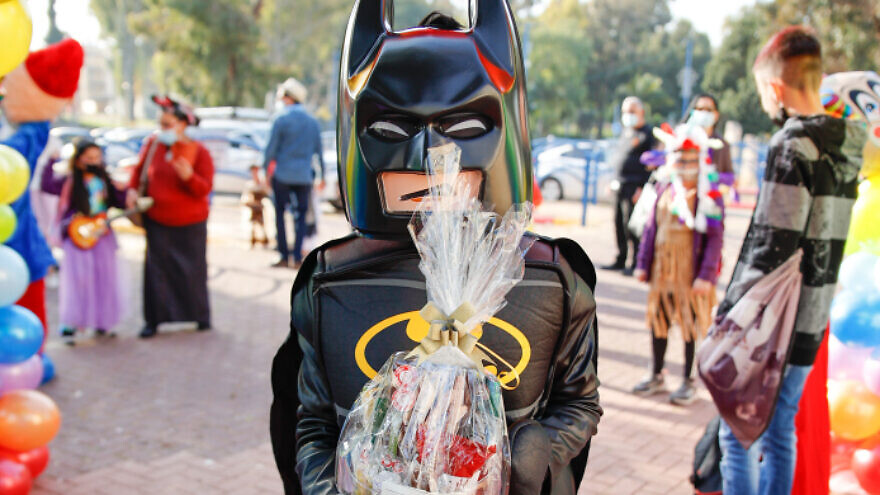 Kids dressed up in costumes arrive at their school ahead of the Jewish holiday of Purim in Sderot, southern Israel on  Feb. 24, 2021. Photo by Flash90.
Republish this article
1211 WORDS
Spread the word.
Help JNS grow!
Share now:

(March 14, 2022 / JNS) It was precisely 10 years ago that Sharon Abeles snapped her first picture of a kid in his Purim costume.

And she was hopelessly hooked. “I could feel I was catching him at a magical moment,” says Abeles, who left her native New York for Israel 37 years ago.

In the years since, Abeles has roamed the streets on this day, capturing many hundreds of children—and plenty of adults as well—in their full Purim regalia.

Purim, which starts at sundown on March 16 (the 14th day of the Jewish month of Adar) and runs for 24 wild and crazy hours, is the one holiday when Jews are literally commanded to be happy, celebrating the triumph of good (personified by Mordechai and his niece, Queen Esther) over evil (a role enthusiastically played by Haman.)

Note: For those who take seriously the edict to drink until one can no longer tell the difference between “blessed be Mordechai” and “cursed be Haman,” one wag renamed the holiday “pour-em.”

Of course, COVID-19, which burst onto the world stage at Purim time two years ago, suddenly made masking more a deterrent than a disguise. But even a global pandemic had little power to stop Abeles from her appointed Purim rounds, focusing her camera mostly in Jerusalem, Beit Shemesh and Ramat Beit Shemesh. “There are certain neighborhoods, I’ve learned, where even though it’s pure fun, what you decide to become that day is serious business,” she says.

Fairies and jellyfish, royalty and jesters, doves and dragons, high priests and henchmen, she’s captured them all—and, bowing to the need to lighten up a serious topic, even a girl-turned-fuzzy COVID-19 germ. That photo was one of the 100-plus images that made the cut for “Purim in Costume,” a slide exhibit now on display at the Jewish Children’s Museum in Brooklyn, N.Y.

Abeles holds a degree from the School of Visual Arts in New York City, and her photographs grace the walls of, among other venues, the Metropolitan Museum of Art on New York City’s Upper East Side and the Bibliothèque Nationale de France in Paris. Come Purim—decked out in her trademark trench coat and camera slung around her neck—she roams the streets in search of iconic costumes. 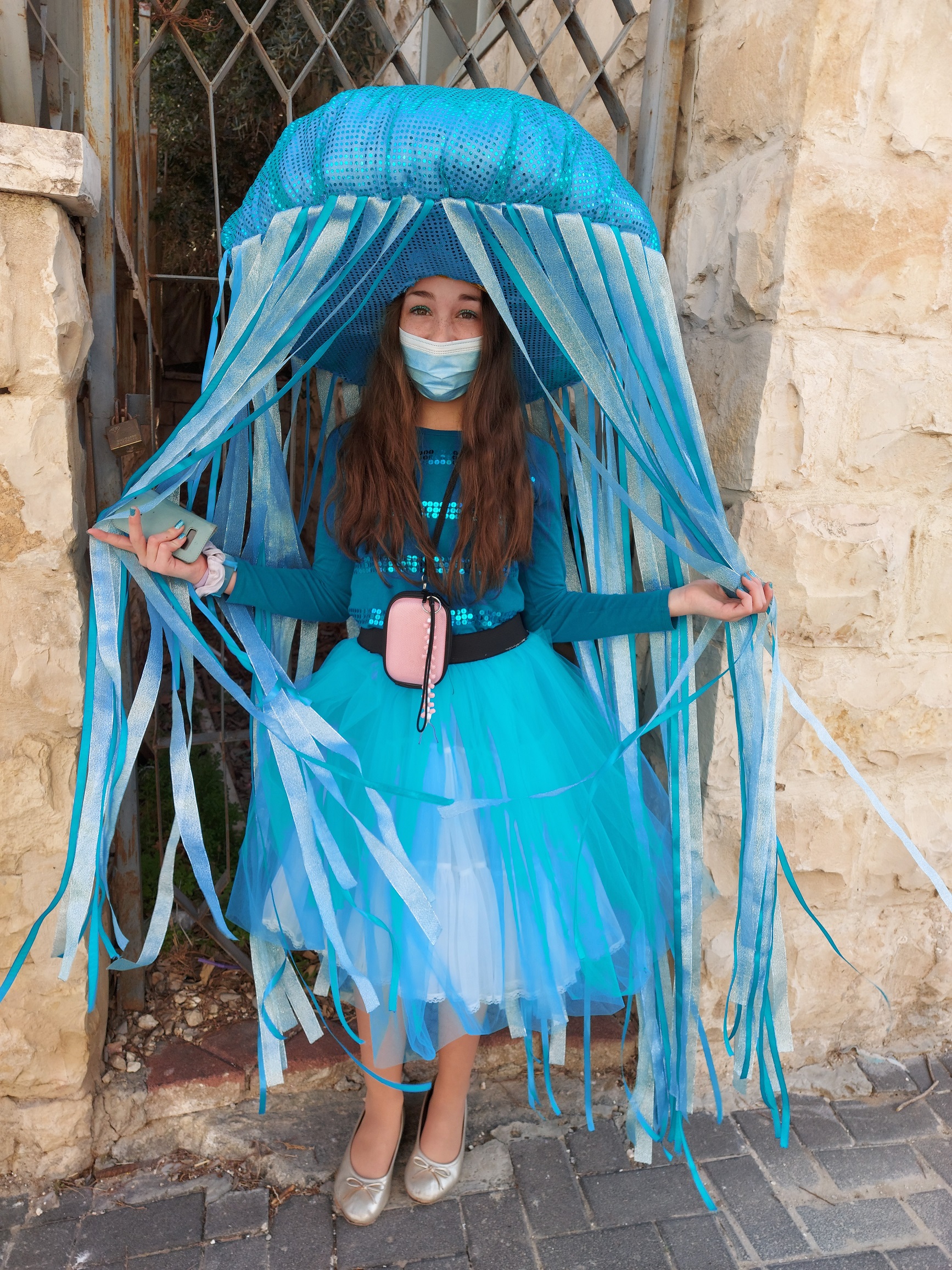 During the rest of the year, she works as a therapist for children and families. Her specialty: helping clients express and come to terms with their problems through art and play. And, it turns out, the connection between her photography and her work as a therapist is closer than one might expect.

“Purim is the perfect time to talk about who they think they are and why they chose that—to explore what it says about them,” says Abeles, the mother of four and a grandmother to boot. “So much planning and hard work go into these costumes; often, the child has the vision many weeks in advance and shares it with the mother, who then goes to work making it happen.” And when donning the results, “kids typically feel so proud and often shyly honored to be noticed as their new identity, sometimes even acting out the role.”

Alter-egos like policemen and first responders can express the yearning to see themselves as a powerful hero; pirates can represent a longing for freedom and a sort of boundary-busting naughtiness. Abeles adds that “costuming as the high priest in the Temple whose breastplate lights up can be about the drive to connect to a higher place—a sort of living Judaism.”

Dressing up can also be a healing technique in working with children who’ve undergone trauma. “It’s a chance to reflect on who they would be if that hadn’t happened, to change the story to a better ending that makes them feel strong and safe,” she says. 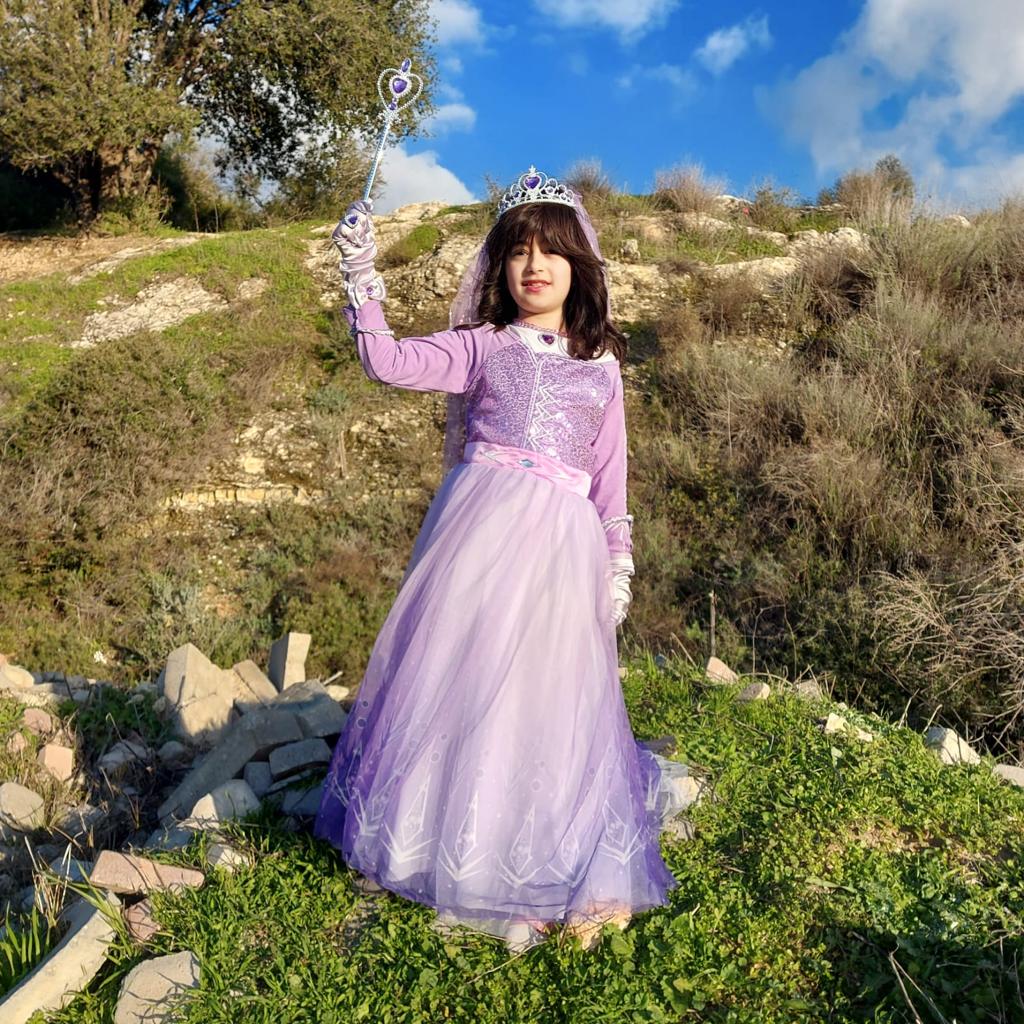 Her personal favorites? Perhaps it was the girl peeking out from between the tentacles of her blue jellyfish costume, the little boy Abeles caught up at the Western Wall dressed as the Ten Commandments or the young girl in a homemade bird costume who, spreading her wings, turned slowly to give Abeles the full effect, white feathers and all. “She appeared to be ready to fly,” she says. “It was a magical moment.”

The therapist and photographer in Abeles both find this a fascinating metamorphosis to witness, she says, “reminding us that Purim is about hiding and revealing at the same time.”

Making magic on a grand scale

Rami Patimer was raised to help create this kind of magic. His family has owned the Brurya Costume Store in Tel Aviv for 37 years, so he grew up among the clothes, masks, wigs and makeup pots. And, this year, rebounding from the COVID-19 lull, Patimer reports that the demand is back in full force.

With ninja costumes literally flying out the door thanks to the popular Netflix series Cobra Kai, and classics like pirates and superheroes continuing to hold their own, “Purim is the one day each year you can forget your troubles, become someone else and live your fantasy,” says Patimer. “You want to be a powerful ninja? You want to be Cinderella going to the ball or King Ahasuerus? I tell my employees. ‘Remember that no matter who’s standing in front of you, she is now Cinderella, and you need to treat her like Cinderella.’ ” 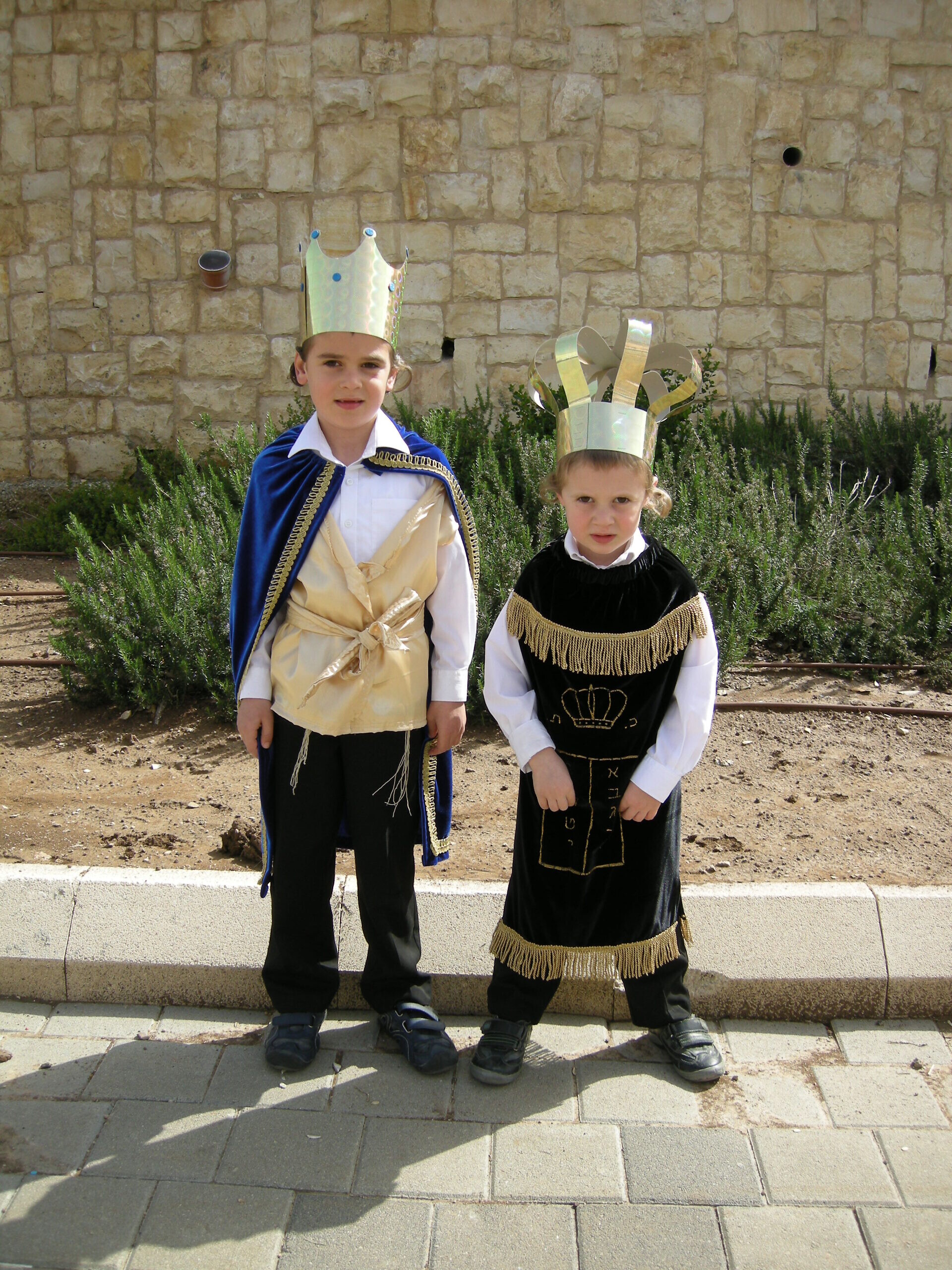 Although Rabbi Menachem Bernfeld is a mature and responsible adult, he confesses that he still loves Purim as much as he did as a kid. Now, however, he has a deeper understanding of what the holiday comes to teach us.

“The story in the Megillah—the book of Esther—actually took nine years to complete, but we read it in an hour, and we know from the beginning that it’s going to have a happy ending,” says the life coach, special educator and father from Lakewood, N.J. “But in our own lives, we don’t know what’s going to happen.”

Adults, especially, wear “costumes” all year round, adds the rabbi.

“We play roles to please people, to succeed. But in a Purim costume, we can actually see more clearly our real self behind our mask—that God is behind everything, so we can live more deeply, more spiritually. We know Esther had to hold the hand of God and trust Him when going to King Ahasuerus, and that she revealed her true identity only when the time was right; that’s how she saved the Jewish people,” he says. “No wonder it’s one holiday that’s expected to continue after the Messiah.”

And the whole of Purim is most assuredly greater than the sum of the parts, insists Abeles. “Here in Israel, the whole country comes alive, reminding us that each of us plays an important role since in every generation, we have Hamans who try their best to destroy us.”

That’s why Purim is the opposite of Halloween, she adds by way of explanation: “It’s not about taking treats from people but bringing treats to friends, family and the needy [known as mishloach manot]. And it’s not about evil or being scary, but about really seeing our true selves and the hand of God in our lives.” 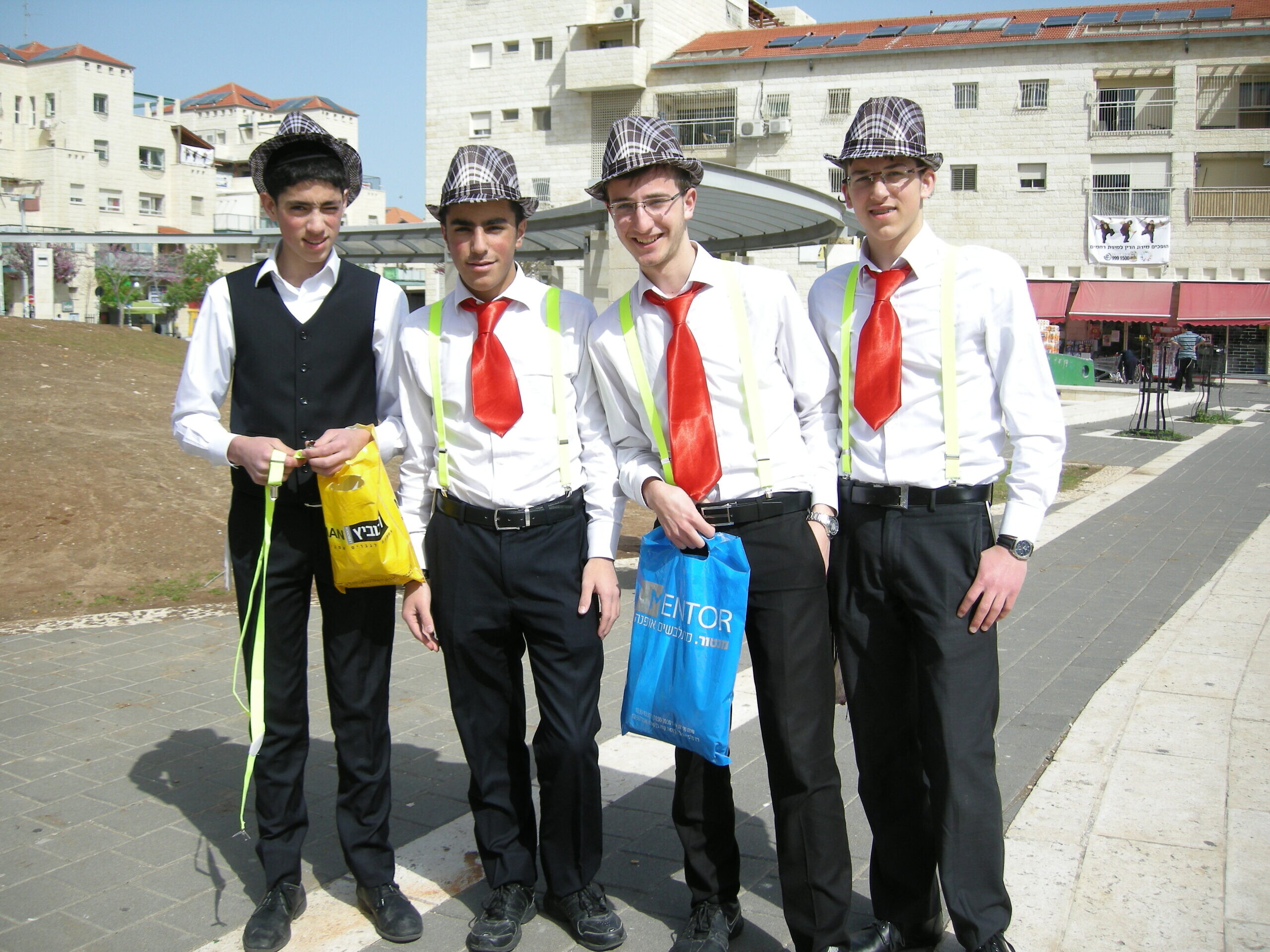 Photo by Sharon Abeles.
Republish this article in your newspaper or website