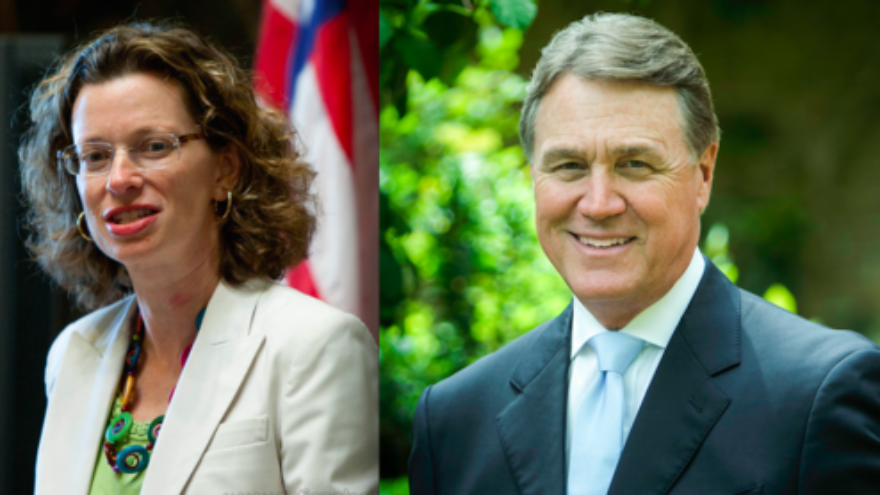 As Republicans look poised to take control of the U.S. Senate after November’s midterm elections, Senate races in a couple of states have tightened, with both political parties re-directing their funds toward key toss-up races before Election Day. In Georgia, a state with a sizable Jewish voter block, the race to fill the open seat of retiring Republican Sen. Saxby Chambliss is attracting truckloads of cash from outside the state for advertising buys.

Both national parties see the race between Democrat Michelle Nunn and Republican David Perdue as a must win—especially the Democrats, who need every victory they can get to maintain control of the Senate despite an unfavorable electoral map this election. Although campaign finance filings from the current quarter are not due to be released on Oct. 30, Politico reported Oct. 14 that the Democratic Senatorial Campaign Committee (DSCC) spent $800,000 on TV ad buys in Atlanta on behalf of Nunn and is expected to spend $200,000 more in the coming weeks.

In response, the National Republican Senatorial Committee (NRSC) authorized $1.45 million to be spent on behalf of Perdue—even though its vice chairman, Sen. Rob Portman (R-Ohio), said in September that the NRSC does not expect to spend more than the $2 million it has already provided for the race.

According to the Atlanta Journal-Constitution, sources within Nunn’s campaign have claimed that their candidates raised more than $4.15 million for the soon-to-be-released third quarter finance report.

Traditionally, Georgia has been considered a solidly Republican state. But in the last decade, an influx of northerners seeking the benefits of Georgia’s rapidly growing job market, as well as increases in the state’s Hispanic, black, and other minority populations, have led many experts to predict that Georgia will become a solidly Democratic state by 2018.

Polls throughout the 2014 electoral season have shown Nunn and Purdue in a statistical tie, and two recent polls—one by SurveyUSA, conducted from Oct. 10-13, and another by WRBL/Ledger-Enquirer/PMB, conducted from Oct. 13-14—showed Nunn beating Perdue by 3 and 1 percent, respectively. With the margin of error for SurveyUSA’s poll being 4.2 percent and that of WRBL/Ledger-Enquirer/PMB’s being 2.5 percent, the race is considered by most experts to be a toss-up.

Both Nunn and Perdue are running for their first political office, but both also come from political families known to Georgia voters and are proving themselves to be strong campaigners.

Nunn is a non-profit executive on leave from serving as the CEO of Points of Light, a non-profit organization founded by former President George H.W. Bush that is dedicated to mobilizing volunteers and other resources to tackle social problems in the U.S. and around the world. She grew up in Bethesda, Md., and is the daughter of popular former Democratic U.S. Sen. Sam Nunn, who has been tirelessly campaigning for his daughter.

Perdue is a lifelong businessman who most recently served as CEO of Dollar General. His first cousin, Sonny Perdue, served as Georgia’s governor from 2003-2011.

Georgia is also home to a sizable Jewish community, second only to Florida in the South Atlantic region with approximately 130,000 Jews in the metro-Atlanta suburbs. Although both candidates’ positions on issues such as Israel have remained murky, efforts to reach out to the community have come in the form of Rosh Hashanah greetings from Nunn to Atlanta’s synagogues, according to a local rabbi who asked not to be named in order to remain apolitical. According to the rabbi, both candidates also attended a pro-Israel rally at the Jewish Federation of Atlanta during the summer, though they did not speak at the event.

Generally, the Jewish community does not appear energized behind either candidate. Unlike the majority liberal northern Jewish communities, Jews in Atlanta are equally split between the two parties, said the rabbi, who feels that at least in his community, the Jews who usually vote Republican will vote for Perdue and those who usually vote for Democrats will support Nunn. The rabbi knows of only a few Republicans who have previously worked with Nunn now throwing their support behind her.

Although Nunn has made few public statements on Israel, JStreetPAC, the political action committee of the left-leaning lobby J Street, has spent more on her campaign than any other candidates in the nation. According to OpenSecrets.com, Nunn for Senate has received $120,189 from JStreetPAC this election cycle. This amount is significantly more than the $97,819 the organization gave incumbent New Hampshire Sen. Jeanne Shaheen (D). Despite the significant contribution, it is unknown how similar Nunn’s positions are to those of J Street. The Nunn campaign did not respond to JNS.org requests for comment.

Kerwin Swint, political science department chair at Kennessaw State University, agrees with the local rabbi’s assessment, saying that Jews in the metro Atlanta region tend to vote more Republican than the national average, possibly because of income and business interests. Swint pointed out that the Attorney General of Georgia, Sam Olens, is a Jewish Republican.

According to Swint, a specifically Jewish issue that might affect the state’s Senate election is Nunn sharing a party with another too-close-to-call Georgia candidacy—that of Jason Carter, who is running for governor and is the grandson of former U.S. president Jimmy Carter. Many Jews consider the former president’s past statements about Israel and the “Jewish lobby” to be anti-Semitic.

Both Senate candidates have made overtures to Jewish donors. The Nunn campaign was embarrassed last July after the National Review magazine published excerpts from a campaign plan designed for Nunn by Washington, DC-based consultant Diane Feldman. The plan brashly objectified minority communities—including Jews—as campaign opportunities, and was accidentally published on Nunn’s campaign website for a day last December.

The section on the Jewish community calls Jewish donors a “tremendous financial opportunity” and states that their support would be contingent on Nunn’s stance on Israel, which at the time was labeled “TBD.” The plan also included a goal for Nunn to raise $250,000 from Jewish donors.

This controversy quickly blew over without any serious repercussions for Nunn’s campaign. Nunn has recently even gained some momentum against Perdue, exciting national Democrats.

Rabbi Jack Moline, director of the National Jewish Democratic Council, believes the language used to describe Jewish donors in the private campaign memo will not affect Nunn’s popularity among Jewish supporters, and feels that Georgia is a state to watch closely since this election’s result could hold clues about the future of national politics and voting trends in the South.

“I’m fascinated by Georgia,” said Moline. “I think that voting in Georgia—not just Jewish voting but voting in Georgia—is likely to give us a glimpse of what the new demographic in the South is going to be like. I think that the [Democrats’] ability to register and turn out voters in the African American, the Hispanic, and the Asian communities that have grown precipitously as voters in the South… [is] going to pay off big time.”

Despite the sudden influx of cash, the DSCC denies shifting its focus from states such as Kentucky, where incumbent Minority Leader Sen. Mitch McConnell appears to lead his Democratic challenger, Kentucky Secretary of State Alison Lundergan Grimes, according to recent polls.

DSCC Communications Director Justin Barasky said that there was no reallocation of funds or change in strategy by the DSCC and that the additional funds given to purchase TV ads on behalf of Nunn’s campaign were not taken from any other state.

Recently, Nunn appears to have effectively put pressure on Perdue with ads highlighting a deposition made by Perdue as the CEO of Dollar General, in which he confessed to outsourcing jobs. Following the deposition, Perdue made media statements implying that he was proud of those actions.

Perdue is now on the defensive against attack ads by Nunn’s campaign and various national super PACs running ads on her behalf. Perdue counters by saying that although he was forced to outsource some jobs at Dollar General, those actions saved and created many more jobs as a result of his successful stewardship of the company.

Despite outsourcing claims against Perdue worrying some voters, GOP political consultant John K. Watson, the co-chair of Perdue for Senate, is confident that Georgia is still a majority Republican state that will give his candidate an advantage, and that voters will connect Nunn to President Barack Obama’s policies.

“We’re looking at a president who is struggling,” said Watson. “I think we’re looking at a number of domestic and global issues that are highlighting what a lot of people in Georgia think are the failed leadership of this president and the failed leadership with [Senate Majority Leader] Harry Reid, and so when you look at [the question of] ‘Are you satisfied with the direction of the country?’ most people I think, or at least the majority here, are going to say ‘no,’ and I think at the end of the day, in this race, a vote for Michelle Nunn is essentially a vote for the continuation of democratic leadership under Reid and the president.”