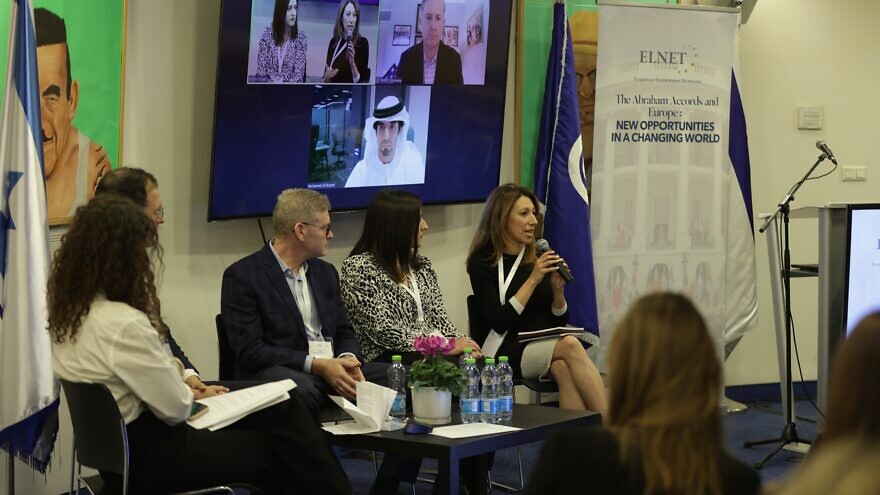 Panelists speak at the ELNET conference on the “The Abraham Accords and Europe: New Opportunities in a Changing World,” in Jerusalem, Dec. 19, 2022. Courtesy.
Republish this article
1087 WORDS
Spread the word.
Help JNS grow!
Share now:

(December 21, 2022 / JNS) Europe has been unenthusiastic towards the Abraham Accords because it remains wedded to the idea that the Israeli-Palestinian conflict must be solved before regional peace can be achieved, participants in a conference in Jerusalem said this week.

Monday’s conference on “The Abraham Accords and Europe: New Opportunities in a Changing World” examined Europe’s perspective on the peace agreements and how to involve it more in deepening their reach and potential. Speakers agreed that Europe has been slow to warm to the U.S.-brokered accords because it’s stuck in an old way of thinking.

The conference was sponsored by the European Leadership Network (ELNET), a nonprofit seeking to strengthen relations between Europe and Israel.

Ironically, Arab countries seem to have jettisoned the Palestinian-centric view of the region faster than Europeans. IDF Maj. Gen. (res.) Amos Yadlin, chairman of ELNET’s Forum for Strategic Dialogue, noted that a senior official in one of the Gulf states recently quoted the late Israeli diplomat Abba Eban: “The Palestinians haven’t missed an opportunity to miss an opportunity.”

“Until now, the E.U. has been on the sidelines.” said Dutch member of the European Parliament Bert-Jan Ruissen, who is vice chairman of the parliament’s Delegation for relations with Israel. “And I think one of the reasons for this reserved attitude is the fact that some decision-makers in the E.U. had to acknowledge that their narrative is obsolete. And that’s not always easy to acknowledge, that your narrative is wrong.”

Ruissen also noted that the agreements are viewed as an American initiative. They were developed during the Trump administration under the direction of Trump’s son-in-law and senior adviser Jared Kushner, with help from then-U.S. Ambassador to Israel David Friedman, Special Representative for International Negotiations Jason Greenblatt and others.

Most participants at the conference agreed, however, that the Europeans have finally awakened to the importance of the accords.

Daniel Meron, former Israeli ambassador  to the Czech Republic and deputy director general for Europe at the Ministry of Foreign Affairs, said that at first Europe didn’t realize “something dramatic” was happening, and “it took some time until statements came out in Brussels congratulating the sides.”

But there were exceptions, he said, singling out Olivér Várhelyi, the Hungarian commissioner of the E.U.’s Directorate-General for Neighbourhood and Enlargement Negotiations, who recognized the tectonic shift the accords represented.

Várhelyi said in September that Europe should “seize the new opportunities” arising from the accords.

“He also set aside money from the E.U. to support cooperation between the different sides and Europe,” Meron said, noting projects have since popped up across Europe, including in Germany, the Netherlands, Italy and Denmark.

“We are hearing a lot of interest from high officials that come here from Europe, or that we meet in Europe, with questions about how they can be more involved. This is something that we didn’t hear a year and a half ago,” he said.

Bilateral trade just between Israel and the United Arab Emirates (excluding software) reached $1.4 billion for the first seven months of 2022.

Dorian Barak, co-founder and president of the UAE-lsrael Business Council, said, “We expect the trade to reach about $5 billion by 2025.…You have about 300 Israeli companies that are very actively working in the UAE, whether it’s through local partnerships, through companies they’ve established, or selling directly in large quantities to Emirati producers and Emirati suppliers.” 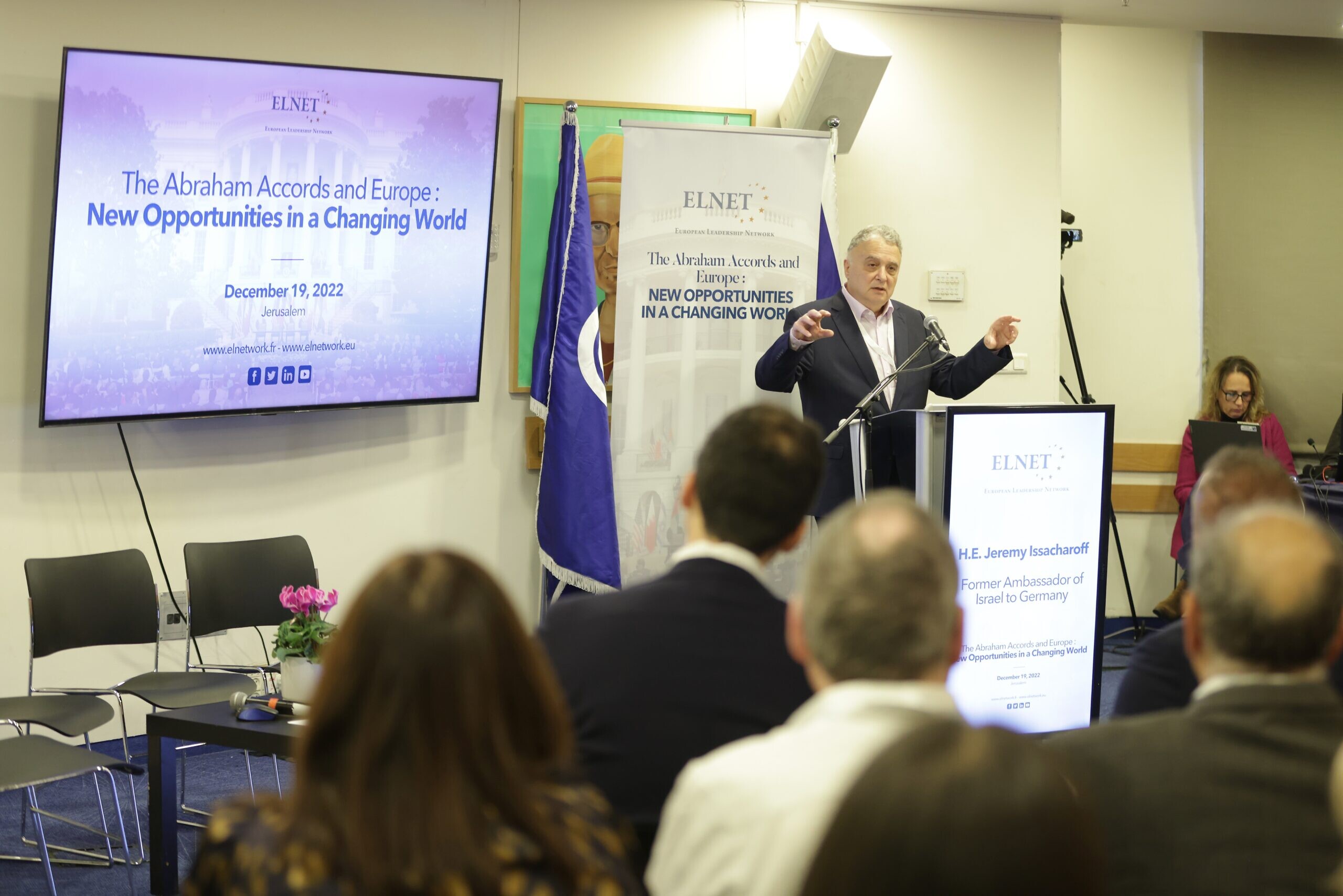 During a panel discussion on the accords’ business potential, participants focused on two key areas: energy and food security, both of which have risen to the fore due to the Ukraine war. Panelists spoke of a three-way economic alliance between Africa, the Gulf countries and Israel to tap the unrealized agricultural potential of African states. Israel would provide the technological know-how and experience.

Danielle Abraham, CEO of Volcani International Partnerships, an NGO dedicated to bringing Israeli agricultural expertise to the world, said that Israel excels in “climate-resilient agriculture,” efficient water usage and grain storage. Israel has the “lowest losses in grain storage around the world,” she said.

Robert Greenway, president and executive director of the Abraham Accords Peace Institute, said that Europe received 40% of its energy from Russia, something unsustainable once Russia attacked Ukraine and weaponized its energy supply. Yet, Europe still lacks a concrete plan to replace Russian supplies, he said.

Greenway’s message to European countries is that Abraham Accords countries have the “resources and capital investment” to build a substitute for Russian energy in the Middle East. “Our argument [to Europe] now is to start and initiate the infrastructure projects to connect the two continents from an energy perspective, so that our partners and allies are interdependent upon one another, as opposed to dependent upon our adversaries.”

“From an American perspective, I would have to say that our strategic interests are always better served when our partners and allies are working in close cooperation with one another, which was also part of the foundational logic behind negotiation of the accords,” Greenway said.

Michael Freilich, a member of Belgium’s parliament, said that the Abraham Accords aren’t just about the Middle East. “I really believe that it will have an effect in Europe itself.”

He said he’d brought the UAE ambassador to Antwerp, which has a Holocaust memorial to the 25,000 Jews who were deported from the city. The ambassador laid a wreath at the monument. Freilich said it was an important moment because of the strong anti-Jewish sentiment among Belgium’s Arab population, which views the conflict as not between Israelis and Palestinians, but between Muslims and Jews.

“The fact that an ambassador from the UAE lays flowers, lays a wreath, at a monument for deporting Jews in the Second World War is really an eye opener for many of the Muslim youth,” Freilich said.

“The fight against antisemitism can gain so much from these peace accords. And that is what I’m trying to explain to my fellow members of parliament and to the various ministers in government—that the Middle East will definitely gain and grow by these Abraham Accords, but there’s an important role for it to play also in the hostility against Jews in Europe. And I know there’s a lot of work that still needs to be done, especially in Belgium and in some Nordic countries, Ireland the same thing, but we must never give up. And we must keep fighting,” Freilich said.