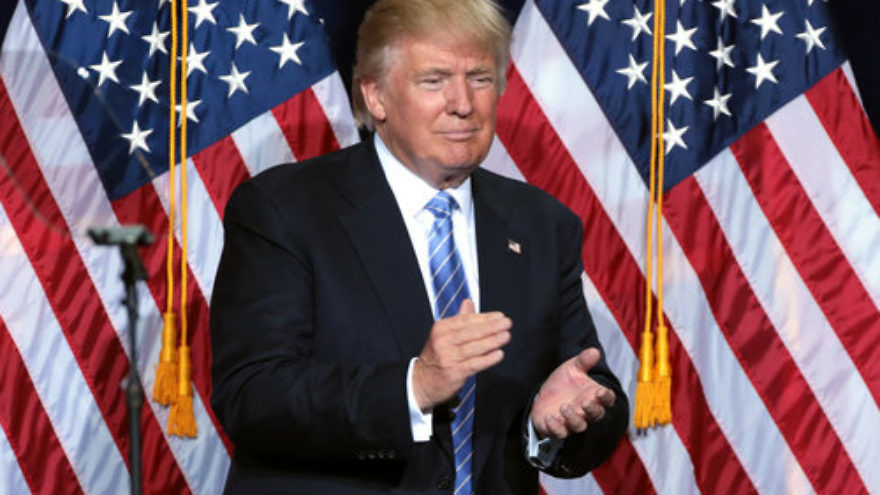 (February 3, 2017 / JNS) President Donald Trump’s administration issued new sanctions against Iran’s ballistic missile program Friday, marking a major step toward realigning U.S. policy in the Middle East away from the Obama administration’s rapprochement with the Iranian-Shi’a axis and back toward supporting the interests of America’s traditional Sunni regional allies.

The newly announced sanctions target 25 individuals and entities associated with Iran’s ballistic missile program, in response to the recent Iranian ballistic missile test that purportedly violated a United Nations resolution forbidding the Islamic Republic from conducting such tests for eight years after the July 2015 Iran nuclear deal. With the sanctions, Trump backed up his administration’s warning from earlier in the week that put Iran “on notice” about its ballistic missile tests and support for terrorism.

Former President Barack Obama had pursued warmer U.S. ties with Iran by making concessions to reach the nuclear deal as well as by not responding to aggressive Iranian behavior. Trump’s shift in approach comes as Iran’s regional ambitions continue to spread deeper into Iraq, Yemen, Syria and Lebanon. In its early days, the new administration is making foreign policy moves that are favored by the anti-Iran Sunni Gulf states (with the exception of Qatar), Jordan and Egypt. Further, the administration is now speaking about implementing safe zones in Syria, a policy that Saudi Arabia and other Sunni nations have been pushing for years.

Regarding Israel, which continues to consider Iran’s nuclear program an existential threat, Trump has signaled that there will be no “daylight” between the U.S. and the Jewish state under his watch.

Michael Rubin—a scholar at the American Enterprise Institute and a former Pentagon official, whose major research areas include the Middle East, Iran and diplomacy—told JNS.org, “It’s not that Trump is siding with the Sunnis versus the Shi’ites. The problem was never Shi’ism per se.”

“After all, we have great relations with Azerbaijan and good working ties with Iraq. Rather, the issue was Obama’s coddling up to a state like the Islamic Republic of Iran, which was actively seeking to support terror groups and destabilize the region,” he said. “What we see with Trump is simply a return to the normal bipartisan position that ties U.S. relations with Iran to its regional behavior.”

Yet Trump’s goal of rapprochement with Iranian ally Russia could hamper his administration’s anti-Iran efforts. Russia, said Rubin, “has been falling into a de facto Shi’ite alliance largely because it plays a zero-sum game, and so will give automatic solace to the most anti-American regimes.”

“During the Obama administration, we distanced ourselves from allies in order to court the anti-American regimes,” added Rubin. “They were happy to take money and concessions, but not to switch positions….Trump will be successful in shifting back to traditionally allies because it’s both logical and a no-brainer. It’s a policy that can base itself more on reality than on Washington spin.”

To date, Trump’s anti-Iran rhetoric has presumably led Saudi Arabia and other Sunni states to suppress any anti-Trump sentiments they might have otherwise expressed over other issues such as Trump’s new restriction on immigration from seven Muslim-majority countries, since countering Iran is widely considered the Sunni nations’ top priority. The Sunnis powers’ anti-Iran stance has also brought them closer to Israel in recent years, although their common interests with the Jewish state largely fly under the radar.

David Andrew Weinberg, a specialist on Gulf affairs and a senior fellow at the Foundation for Defense of Democracies, told JNS.org that since the 1979 Iranian Revolution, all American presidents have favored friendly Sunni Arab states over Iran. However, Weinberg said, “many Sunni leaders were understandably disappointed that the Obama administration sought to engage with Iran, cut a deal on the nuclear file, and avoided pushing back militarily.”

Now, the Sunni Gulf states are “uniformly glad to see a new U.S. administration that seems more willing to push back against Iran’s regional influence and aggression,” he said. At the same time, Trump’s immigration ban is eliciting deep concern among America’s Arab allies, “although they are downplaying that concern in hopes of a more productive relationship with Washington versus Iran—or versus the Muslim Brotherhood in the case of Egypt,” according to Weinberg.

Some of America’s Arab allies are also wary that the immigration ban could be expanded to apply to their nations, as White House Chief of Staff Reince Priebus suggested Sunday. “That is particularly problematic for Saudi Arabia, the UAE (United Arab Emirates and Egypt),” said Weinberg.

The Gulf expert noted that the Gulf Cooperation Council—a regional body representing Bahrain, Kuwait, Oman, Qatar, Saudi Arabia and the UAE—criticized the immigration restrictions when Trump announced the idea during the election campaign. The ban’s recent implementation elicited criticism from the Organization of Islamic Cooperation, which is based in Saudi Arabia and heavily influenced by that country’s government.

“But for now, America’s Arab allies—except for Yemen and Iraq, which are themselves targeted by the executive order—are largely staying quiet, except for some measured criticism by Qatar’s foreign minister in response to a press question on it, and an effort to publicly defend the ban by the UAE’s foreign minister,” Weinberg said.

Indeed, the outlier on the Sunni side’s staunch opposition to Iran is Qatar, and it is unclear if Trump will seek to clamp down on incitement and radicalism emanating from that Gulf state. Iran and Qatar both fund Hamas, the Palestinian terror group committed to Israel’s destruction.

Weinberg, who recently published a report on Qatar’s financing of terror, said it is unclear whether or not the Trump administration will give the Qatar a pass because of its pledged investments in the U.S.—including $10 billion in U.S. infrastructure, a priority for Trump.

“Or, will Trump be tough on the Qataris,” asked Weinberg, “because of their ongoing negligence toward hate preachers and toward funders of al-Qaeda, as well as Qatar’s affinity for the Muslim Brotherhood, an extremist group that several senior members of the new U.S. administration intensely oppose and want to designate as a terrorist organization?”