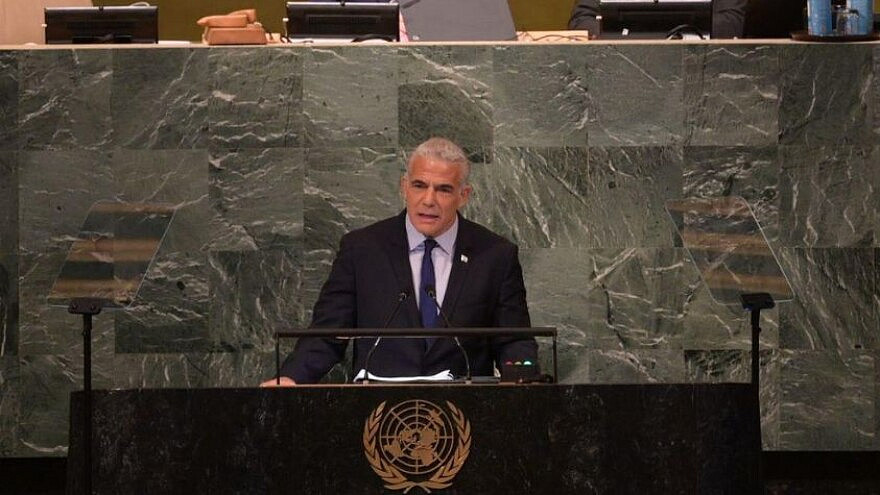 The council held its monthly briefing and consultations on the Israeli-Palestinian file. United States Ambassador to the U.N. Linda Thomas-Greenfield hailed Lapid’s announcement last week at the General Assembly as “courageous and impassioned.”

At the same time, Thomas-Greenfield was unusually harsh in her assessment of Israeli actions, including “violence inflicted by Israeli settlers on Palestinians in their neighborhoods, and in some cases escorted by Israeli security forces.”

She did note ongoing terrorist attacks and “incitement to violence against Israelis” and called on the Palestinian Authority to stop “making payments to those who harm Israelis.” Thomas-Greenfield was referencing the P.A.’s so-called “pay-for-slay” policy that provides monthly stipends to Palestinians who carry out terror attacks, and to the relatives of slain terrorists.

On the sidelines of the General Assembly last week, at a broad international development forum for assistance to Palestinians and the Palestinian Authority, known as the Ad Hoc Liaison Committee (AHLC), the P.A. committed, under pressure, to heavily reducing the $200 million a month it spends on public employee salaries. However, the P.A. was quick to clarify that “allowances paid monthly and regularly to categories of non-employees, specifically the families of martyrs, wounded and prisoners…will not be affected according to assurances issued by the Palestinian Authority at all levels.”

Norwegian Ambassador to the U.N. Mona Juul, who chaired the AHLC meeting, told the Security Council on Wednesday that “while some recent progress has been made on trade issues, work permits and Palestinian reform plans, it is clear that the situation is challenging, and more concrete progress is needed.

Juul stressed the need “to end the internal Palestinian division [between the Fatah-controlled P.A. and the Hamas-controlled Gaza Strip] and strengthen the Palestinian Authority,” including by ensuring “democratic renewal and stronger institutions.”

United Kingdom Ambassador to the U.N. Barbara Woodward also expressed concern with the “deteriorating security situation” in Judea and Samaria, urging all parties to “reduce tensions and avoid destabilizing unilateral actions.” She said that while the UK “remains fully supportive of Israel’s right to self-defense,” and was appalled by terrorist attacks against Israeli citizens, the U.K. advocates “swift, transparent investigations” of accusations of excessive use of force by Israeli security personnel, who have been conducting operations to root out terrorists in Palestinian Authority-controlled territory.

China, which generally weighs in on the side of the Palestinians, took an unusually balanced approach on Wednesday. Ambassador Zhang Jun remarked that security for Israel and the Palestinians is “interdependent and indivisible. If the security of one side is based on the insecurity of the other, the cycle of violence will continue, and security cannot be achieved.”

Zhang encouraged the international community to “attach equal importance to the security concerns of both sides, and encourage them to find the greatest common denominator.”

Meanwhile, Russian Deputy Ambassador to the U.N. Dmitry Polyanskiy continued his country’s antagonistic treatment of Israel at the Security Council, accusing Jerusalem of “arbitrary wrongful actions [that] go beyond the West Bank and Gaza Strip,” referencing anti-Iran air operations on and over Syrian and Lebanese territory.

Russia has been unrelenting in its criticism of Israel at the U.N. since the Jewish state criticized Moscow for its invasion of Ukraine. Polyanskiy joined a number of Arab leaders who continually accuse Israel of provocations at the Temple Mount, which are often times used as a pretext for terror attacks against Israel.

“We are concerned about reported possible provocations at the Al-Aqsa mosque in the coming fall, which will mark three key Jewish holidays as well as a new cycle of the Israeli election campaign,” said Polyanskiy.

He accused the United States of blocking Russia from taking part in the Middle East peace process as a member of the so-called Quartet for Middle East Peace, which has been dormant for several years.

Albanian Ambassador to the U.N. Ferit Hoxha displayed empathy for Israel at the Security Council rarely felt from European members, if only because his country recently got a taste of Iran’s menacing actions.

“As my own country was recently victim of an unprovoked, massive and large scale cyberattack that aimed to destroy critical government infrastructure, sponsored and carried out by groups affiliated to Iran, we understand better the concerns of the security of other countries, Israel in particular, faced continuously with the threat from a state that calls openly and continuously for its destruction, that sponsors proxies at its backyard with the sole aim to harm, kill and destroy,” said Hoxha.