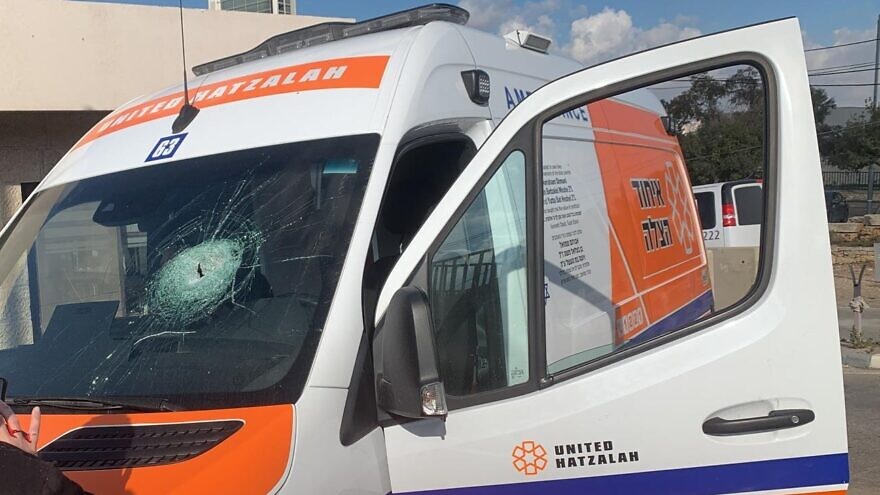 (January 5, 2023 / JNS) A United Hatzalah volunteer ambulance driver was lightly injured on Thursday in a stoning near Tekoa, in the Gush Etzion region of Judea.

The driver, Rachel Chuna, was treated at the scene. The ambulance’s front windshield was smashed in the incident.

“As I was driving past the Arab village of Tuqu’, a number of teenagers began throwing stones at cars on the road,” said Chuna. “The ambulance was struck by a number of large stones, and I sustained an injury to my arm. I called dispatch and reported the incident and then quickly drove to the Jewish town of Tekoa, where I received medical treatment,” she added.

Overnight Wednesday, a Palestinian youth was killed near Nablus during a gun battle between armed Palestinians and Israeli security forces, who came under fire during an arrest operation in the outskirts of Balata.

The soldiers returned fire, and several hits were identified, the Israel Defense Forces said in a statement.

Two suspects were apprehended during the operation, and arrests were also made in several other Palestinian towns and cities, according to the IDF.

Israeli forces were also attacking during an operation in Qalandiya, north of Jerusalem. Two terror suspects were apprehended during the operation, and ammunition was seized, according to the IDF.

Palestinians stoned Israeli troops during the raid, who responded with riot dispersal methods, the military said.