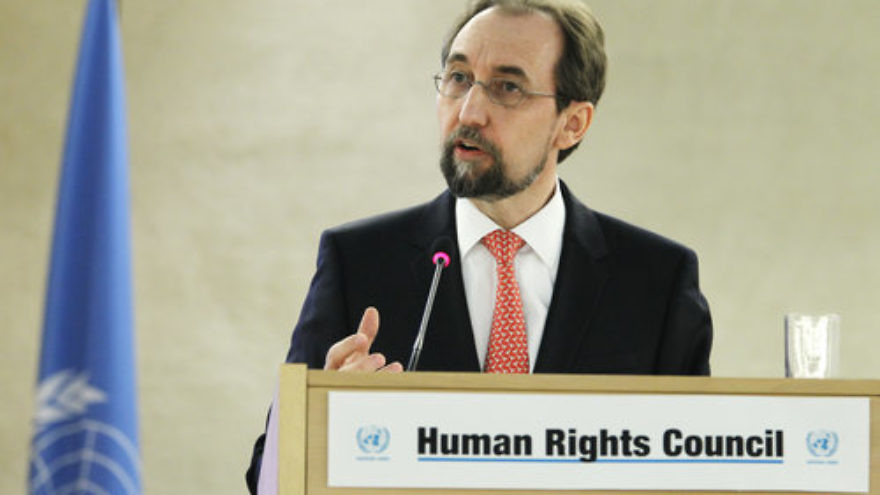 An upcoming “blacklist” of major international companies with business ties to Israeli communities in Judea, Samaria, the Golan Heights and eastern Jerusalem represents yet another attempt by anti-Israel actors in the United Nations to single out and demonize the world’s only Jewish state, experts say.

The U.N. Human Rights Council (UNHRC) had voted to approve the database of businesses last year, defying objections from the U.S. and Israel. U.N. High Commissioner for Human Rights Prince Zeid bin Ra’ad Zeid al-Hussein submitted a draft of the blacklist to the countries where the businesses are based. He is expected to receive a response from those nations by Sept. 1, and the UNHRC will publish the database by the end of this year.

“[The blacklist] is the latest incarnation of the decades-long Arab boycott and yet another singling out of Israel by the U.N. Because Israel, the Jewish state, alone is singled out, the intent and impact is anti-Semitic,” Anne Herzberg, a U.N. expert and the legal advisor for the Jerusalem-based NGO Monitor watchdog group, told JNS.org.

Similarly, Israel’s Ambassador to the U.N. Danny Danon described the list as “an expression of modern anti-Semitism reminiscent of dark periods in history.”

While the list will have no legal consequences for Israel or the companies involved, its opponents say it could put pressure on the U.N. Security Council to take action.

Supporters of the list draw inspiration from efforts to target international businesses that were involved in apartheid-era South Africa as well as Arab-led boycotts of Israel as a means to pressure the Jewish state to change its policies regarding the Palestinians and the disputed territories.

But Michal Hatuel-Radoshitzky, a research fellow for Israel’s Institute for National Security Studies, said the list will likely do the opposite and undermine any chances for a two-state solution.

“First and foremost, this is because such a ‘blacklist’ serves to strengthen the common Israeli perception of a hostile international community which is united against the Jewish state,” Hatuel-Radoshitzky told JNS.org.

She said, “This paradigm strengthens the hardliners and works against the moderate camp that perceives the two-state solution—which ultimately necessitates compromises from Israel—as the desired alternative.”

UN’s credibility
The blacklist also “serves to undermine the credibility of the UNHRC in specific and to further taint the U.N. in general,” Hatuel-Radoshitzky said.

Since taking over as U.N. secretary-general in January, Portugal’s António Guterres has attempted to take a more evenhanded approach to the Israeli-Palestinian conflict after years of disproportionate criticism of Israel by the world body.

“As secretary-general of the United Nations, I consider that the state of Israel needs to be treated as any other state,” Guterres said in an address to the World Jewish Congress in April.

“I have already had the opportunity to show that I’m ready to abide by that principle even when that forces me to take some decisions that create some uncomfortable situations,” he added, referencing a move he made to squash a report by former U.N. official Rima Khalaf that called Israel an “apartheid state.”

Herzberg said that while it does not appear Guterres is in favor of the of the blacklist, it might be impossible for him to stop its release.

“Due to the U.N. bureaucracy and the dominance of the Arab League and the Organization of Islamic Cooperation, it would be difficult if not impossible for the secretary-general to halt the process,” she said.

According to Herzberg, such reports are often compiled by a “narrow sector” of political activists and NGOs, many who are linked to terror groups and the BDS movement.
“Many U.N. officials were formerly employed by these partisan organizations and harbor extreme anti-Israel views,” she said.

US response
The Trump administration recently urged the human rights commissioner, Hussein, not to publish the blacklist. U.S. Ambassador to the U.N. Nikki Haley called the list “shameful” and “counterproductive” to the Israeli-Palestinian peace process.

“It is an attempt to provide an international stamp of approval to the anti-Semitic BDS movement. It must be rejected,” Haley said.

In June, the U.S. indicated that it may replace its membership in the UNHRC with “other means” for addressing human rights issues, unless the U.N. body significantly reforms its conduct and anti-Israel bias.

At the same time, more than 20 U.S. states have passed legislation in recent years opposing the BDS movement, by requiring state institutions to cease any business with companies that boycott the Jewish state.

Both federal and state measures against BDS “will be effective in blunting the impact of the blacklist,” Herzberg said, adding she believes U.S. leadership will be essential in curbing the effectiveness of the U.N. blacklist.

“Countries and companies will have to decide—do they want to do business in the U.S. or side with the bigots of the U.N., the Arab League and the Organization of Islamic Cooperation,” she said.