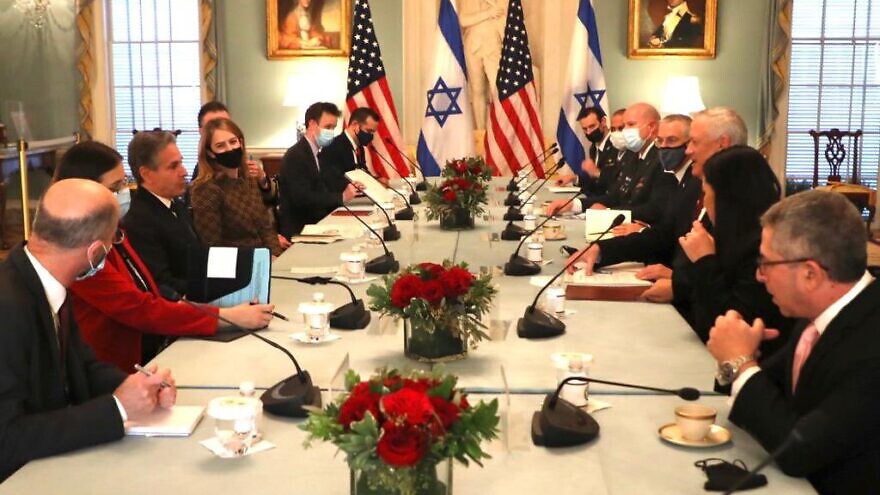 (January 3, 2022 / JNS) The gaps between Israel and the U.S. over how to deal with Iran’s nuclear program remain very large, Israeli observers have said. Yet the struggle by Washington to meet Israeli requests to bring forward deliveries of defense procurements has nothing to do with divisions over Iran, a former defense official added.

Brig. Gen. (res.) Prof. Jacob Nagel, who was acting National Security Advisor to former Prime Minister Benjamin Netanyahu, and former head of Israel’s National Security Council, told JNS, “To the best of my understanding, Israel and the U.S. are holding an open dialogue on many issues, including the Iranian issue. The dialogue is seeing many messages exchanged, and the gaps between the sides are open and on the table. Not everything can be agreed upon, and in the case of the Iranian issue, the gaps are very large.”

Nagel, a senior fellow at the Foundation for Defense of Democracies, and a visiting professor at the Technion – Israel Institute of Technology Aerospace Faculty, stated, “Israel has made its position clear and is safeguarding its freedom of action in all arenas, both during negotiations and afterwards, whether there will be a full or partial agreement. Israel has made it clear that the worst of all options is the intermediate agreement, involving ‘freeze [of sanctions] for freeze [of nuclear progress by Iran] situation,’ which would give the Iranians everything, and which would whitewash the regime’s past sins. It would leave Iran with all of the profits from transgressions. This would give the Iranian regime billions of dollars for rebuilding its economy and continuing support for terrorism.”

Prof. Eytan Gilboa, an expert on U.S.-Israel relations at Bar-Ilan University and a Senior Fellow at the Jerusalem Institute for Strategy and Security, said that unlike the leadup to the 2015 nuclear deal between Iran and world powers, the Israeli government this time has decided to avoid a public argument with its number one ally.

“This is a dramatic change from 2015,” Gilboa said. “Also, the fact that in Israel there are those who say that former President Trump’s exit from the nuclear deal in 2018 was a mistake is important in American eyes.”

Despite the change in its pubic approach, Jerusalem is alarmed by the foot-dragging that Iran is conducting to play for time while making nuclear progress, Gilboa said. The U.S. has recently placed a time limit on negotiations, with American officials saying weeks remain for an agreement.

“The second issue is that of verification. Israel maintains that Iran lied and cheated throughout the years. The fact that Iran is enriching uranium to more than 60 percent proves that this is not a peaceful program, since that would only need 5 percent enriched uranium. Hence, Israel is drawing attention to the need to place much better verification compared to what as in place in the 2015 deal,” said Gilboa.

Meanwhile, as the U.S. attempts to re-engage Iran diplomatically at Vienna, reports have surfaced of ongoing refusals by the U.S. to bring forward deliveries of strategic defense procurements for Israel, such as modern midair refuelers.

Nagel criticized reports that he said falsely attempted to link America’s reply to Israel’s “legitimate requests to bring forward” defense procurements, and a lack of agreement between Israel and the U.S. about the Iranian issue.

“The truth is, according to my assessment and understanding, that requests to bring forward procurement has been in the dialogue for a long time, and not just the refuelers,” he said. “To the best of my knowledge, had there been an approved Israeli state budget earlier, and had the Israeli Air Force’s full procurement plan had been agreed upon and approved within the IDF vis-à-vis the political echelon, the order for the refuelers would have gone out three years ago already.”

On Friday, the Israeli Defense Ministry announced that it had signed a Letter of Agreement with the U.S. to acquire two Boeing KC-46 refueling aircraft, and 12 Lockheed Martin CH-53K helicopters.

Defense Minister Benny Gantz described the procurements as “significant milestones in the IDF’s force buildup processes,” adding, “We continue to strengthen our capabilities and to change and adapt our Air Force to face future challenges both near and far.” 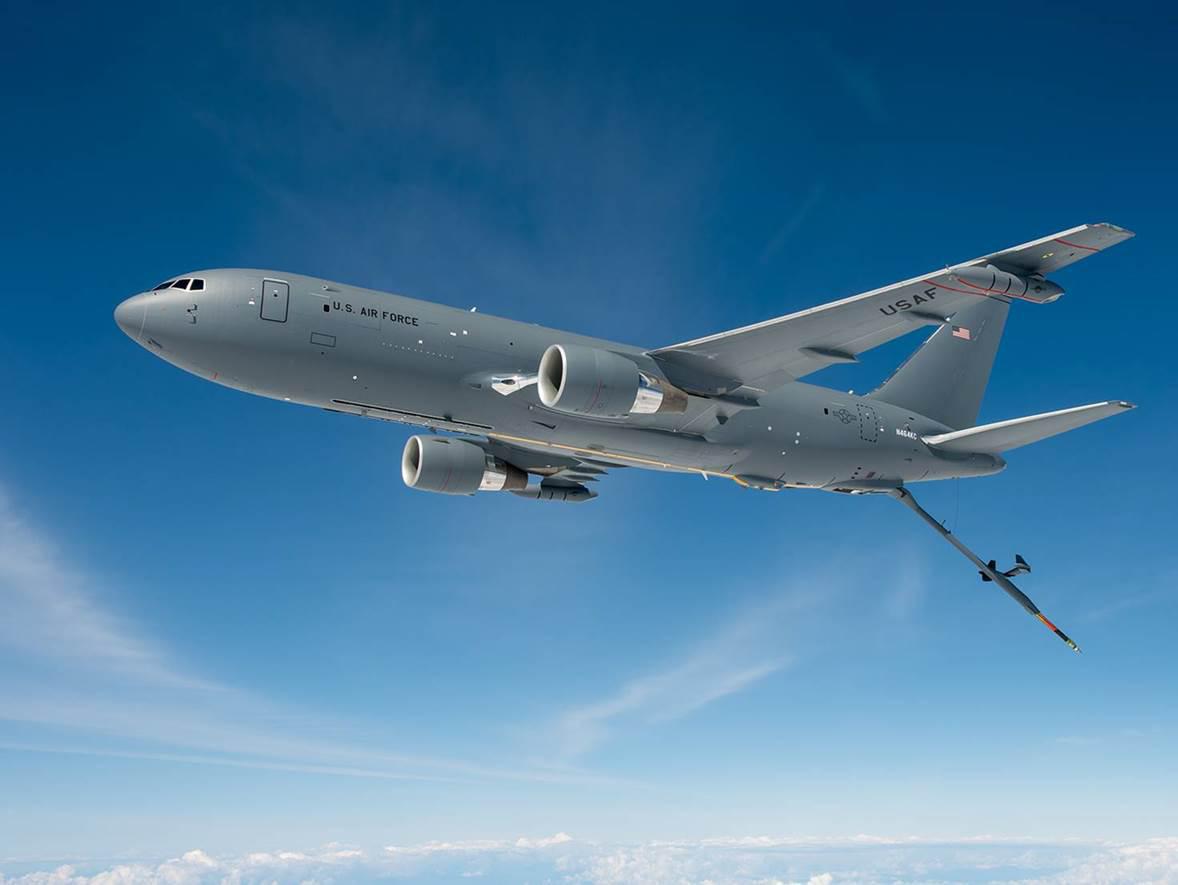 The scope of the agreement is estimated to be at $2 billion in Foreign Military Financing – U.S. assistance funds to Israel.

While the first helicopters are expected in Israel in 2026, there was no word on when the refuelers would arrive — the procurement of which is worth some $1.1 billion — would arrive.

Gilboa said the refuelers could keep F-35 jets in the air for 12 hours, and that Israel is interested in six such platforms.

While reaching a poor agreement with Iran would increase diplomatic tensions between Jerusalem and Washington, Gilboa said, helping to ensure that Israel has military capabilities to deal with Iran would act as a sufficient “compensation,” he assessed.

An MOU for defense procurements that Nagel signed on behalf of Israel with the U.S. went into effect in 2018. It pledged $3.8 billion of military assistance funds to Israel per year and was never subject to re-consideration since its signing — evidence, Nagel said, of the fact that the timeline for the deliveries is not linked to disputes over Iran.

“Washington’s inability to meet requests for bringing refuelers early comes only from operational considerations and in major shortage in the U.S.’s force build-up capabilities,” he said. “It’s too bad this is being tied to the Iranian issue, because if it’s not tied, there is a chance, like in the past, that the Americans will answer the call and bring forward deliveries from their own supplies.”

What is plan B?

Nuclear talks resumed in Vienna on Monday after the parties took a break for the new year. A spokesman for Iran’s Foreign Ministry said that talks are “entering an in-depth phase,” according to Voice of America.

In the event that Iran and world powers fail to reach an agreement, the question surfaces, what is America’s “plan B?” Gilboa and Nagel both said that it is clear from America’s posture that military action is not on the table, but rather, economic sanctions are, which would also receive cooperation from European states.

They both also noted that the same team that ran negotiations with Iran for the Obama administration is in fact doing the same for the Biden administration. National Security Advisor Jake Sullivan, the special envoy to Iran Robert Malley, and Deputy Secretary of State Wendy Sherman are prominent examples, according to Nagel and Gilboa.

“It’s the same team,” said Gilboa. “And it is today calling for a ‘less for less’ agreement. Israel is disturbed by this.”

Nagel said, “Biden’s team does not think the Iranians need to be punished for their ongoing transgressions of the NPT (Treaty of Non-Proliferation of Nuclear Weapons), and lack of cooperation with the International Atomic Energy Agency. It does not think there should be consequences for Iran for violating every agreement it signed, including the JCPOA (Joint Comprehensive Plan of Action – the 2015 deal). The U.S. wants to safeguard a fictitious picture of progress towards a diplomatic deal at any price,” Nagel cautioned, adding that the resulting agreement, if it is signed, is likely to be “very bad.”

Without a credible military threat on the table, Iran is unlikely to budge, Gilboa said, and this is why it is imperative that Israel is able to place such a threat on the map.

Last week, Prime Minister Naftali Bennett alluded to this posture, telling Army Radio that Netanyahu’s claim that Israel has committed to “no surprises” for the U.S. on Iran, and won’t be able to act against Iran, is a “total lie.”

“Israel won’t be a side in an agreement and will always keep its right to act and defend itself on its own,” Bennett vowed.

“We want a good deal,” he said. “Is this expected to happen in the current parameters? No. Iran is in the talks with very weak cards, but unfortunately, the world is acting like Iran is in a position of power.”

In an attempt to improve the deal wherever possible, Israel has been sharing intelligence with the U.S., Gilboa noted, hoping to achieve two objectives.

Ultimately, Gilboa said, Iran’s strategy is long-term and sophisticated, and rests on giving the impression of a willingness to stop its nuclear program to achieve sanctions relief, while hiding its true intentions.

“The Iranians could also be tempted to reach the threshold stage and enjoy all of the advantages of having nuclear weapons without actually taking the last step of assembling the bombs. They are pursuing a vague policy, and the West does not know what their intentions are. But for Iran, it is clear what the West is willing to do,” said Gilboa. “This creates an asymmetry in the negotiations, placing the West in an inferior situation.”