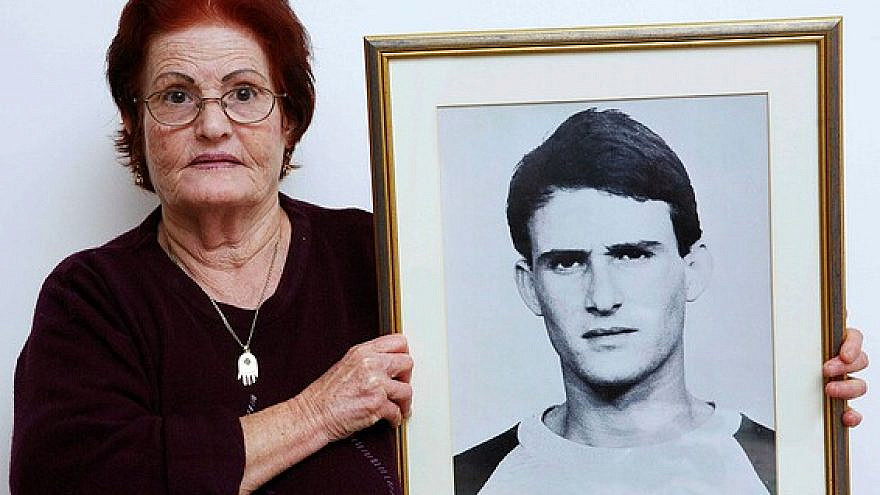 Galia Tamam holds a picture of her son, Moshe, who was murdered by Palestinian terrorists in 1984. Photo by Yehoshua Yosef.
Spread the word.
Help JNS grow!
Share now:

According to local media reports, following his release, Abu Makh, a member of a cell that abducted and murdered Israeli soldier Moshe Tamam in 1984, returned to his home in Baka al-Gharbiyeh, where locals waving Palestinian flags were waiting to welcome him.

In an interview with Army Radio on Monday, Moshe Tamam’s brother Oren demanded that Israel strip Abu Mukh of his citizenship.

“We live a 10-minute drive from him. This bastard has been receiving support from the Palestinian Authority for decades. We could see this human scum in the mall near our house,” he said.

“We were shocked by the pictures of the celebrations of joy in Baka al-Gharbiyeh with P.A. flags. It is as if the country is paralyzed. He is a despicable killer. He has blood on his hands,” he said.

Abu Mukh is one of the Palestinian Authority’s highest-paid terrorists, according to Palestinian Media Watch’s report on Ramallah’s “pay for slay” program.

On Facebook, Moshe’s niece Ortal said her family had asked Israeli Interior Minister Arye Deri to revoke Abu Mukh’s citizenship more than a year ago, but that Deri had refused to meet with them.

In a Facebook post on Sunday, Israeli Transportation Minister Miri Regev wrote: “There is nothing more moral and right than the Tamam family’s demand to revoke the citizenship of the despicable terrorists who murdered the late Moshe Tamam.”