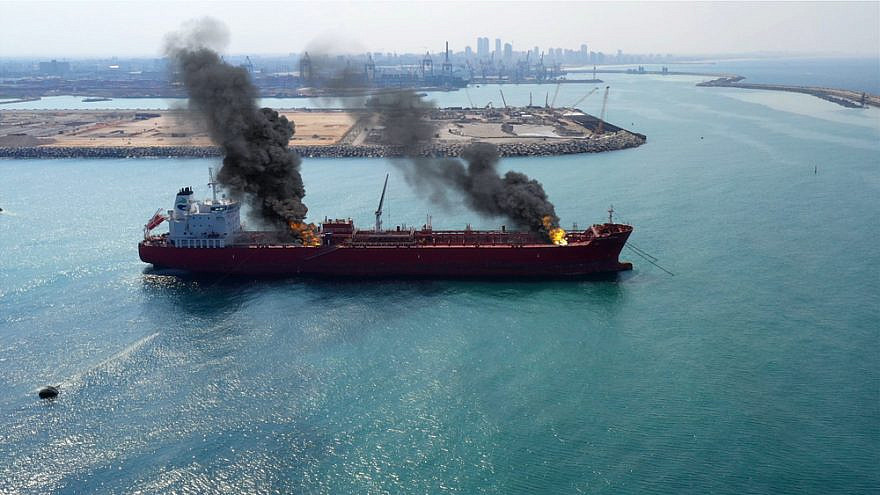 (March 15, 2021 / JNS) Recent reports suggest that the United States is disturbed by aspects of the Israeli-Iranian shadow war that is raging across the region—in this case, at sea. It seems reasonable to conclude that Washington is trying to lower tensions that it fears can spoil attempts to negotiate a new nuclear agreement with Tehran.

The report came just as signs of a possible escalation between Israel and Iran on the seas appeared, suggesting that the information was designed to send a signal to Israel to cool down the alleged special operations at sea.

The report surfaced close to the time that Iran accused Israel of being behind an attack last week on an Iranian container ship in the eastern Mediterranean Sea, named as the Shar e Kord, causing a fire.

That attack came days after Israel said that Iran was behind an explosive attack on an Israeli-owned cargo ship, the MV Helios Ray, in the Gulf of Oman.

Israel’s alleged covert campaign at sea is part of a much larger campaign, dubbed by the defense establishment as the “campaign between the wars,” designed to prevent the radical Iranian axis from building up its military and terrorist power in the region but to do so without crossing the threshold of regional war.

It is a delicate balancing act that has enabled Israel to put the brakes on alarmingly ambitious Iranian schemes, pioneered by the late Islamic Revolutionary Guard Corps’ Quds Force Gen. Qassem Soleimani, to use air routes, land routes and the sea to flood Syria, Lebanon, Iraq and other areas with precision-guided missiles, missile factories, well-armed militias and the creation of new “rings of fire” around Israel.

Jerusalem has created a powerful intelligence-gathering machine that is able to detect many of these activities in real time and disrupt them, using an array of precision airstrikes, special operations, cyber technology and other means. Most of these activities remain hidden from public view.

Cash payments from Damascus to Beirut

So why have oil tankers that are moving Iranian oil to Syria become an alleged target?

According to a recent analysis by Ynet’s veteran military analyst Ron Ben Yishay, Iranian oil-smuggling to Syria began even before the Trump administration placed sanctions on Iranian oil exports in May 2018 (when Trump withdrew from the former nuclear agreement), and before the United States slapped sanctions on Syrian President Bashar Assad and his regime for its countless war crimes.

However, since May 2018, when the Iranians faced restrictions on transferring funds through the international financial network, they faced a new obstacle: How to get paid for smuggled oil to countries such as Syria?

They found a work-around: The Assad regime began paying its oil debts directly to Iran’s proxy Hezbollah, enabling Iran to launder its terror financing in new, convenient ways, and to continue its backing for Hezbollah’s force build-up programs, according to Ben Yishay.

To get around America’s Caesar Act, which bans international transactions with Syrian banks, as well as with Lebanese banks that work with their Syrian counterparts, the Assad regime was able to smuggle cash payments from Damascus to Beirut with ease.

As part of this scheme, oil tankers are loaded up at Iranian ports in the Persian Gulf or at Qeshm island in the Strait of Hormuz and then proceeded to sail through a variety of routes towards the Syrian coastline, where, still at sea, they rendezvous with Syrian ships and transfer their oil cargo, or alternatively, directly dock at Syria’s Latakia or Tartus ports and unload their oil cargo.

With these journeys forming a key part of Iran’s radical axis financing, Israel may have decided that as part of its campaign between the wars, it was time to disrupt this Hezbollah financing channel.

The Iranians, likely fed up with such operations, retaliated at the end of February by targeting the Israeli-owned cargo ship, and Israel may have decided to boost its own deterrence by targeting the Shar e Kord ship in response.

The resulting escalation dynamic appears to have set off alarm bells in the Biden administration, likely resulting in the leaked information on this previously unknown aspect of the campaign between the wars.

A question that remains unanswered is how the ecological disaster caused by an oil spill off the Israeli coastline in late February, which has been linked by Israel’s Environment Protection Ministry to a ship illegally smuggling oil from Iran to Syria, fits into this picture.

Israel’s Environment Protection Minister Gila Gamliel said Iran was behind the spill, accusing it of “ecological terrorism,” though Israel’s defense establishment has not confirmed that this is indeed the case.

Meanwhile, dispelling rumors that Israel itself was accidentally responsible for the spill as part of its campaign against Iranian oil tankers, Israel’s Defense Minister Benny Gantz firmly dismissed this theory.

Presumably relying on an array of intelligence reports, Gantz said on Sunday, “I can tell you emphatically that Israel is not responsible for the oil spill that caused the considerable damage along the coast.”

The cause of the spill, therefore, remains unresolved.

“We are moving into the water arena. This is one of the arenas of conflict between Iran and Israel,” Professor Uzi Rabi, director of the Moshe Dayan Center for Middle Eastern and African Studies at Tel Aviv University, observed on Sunday.

“This is part of the Iranian pirate activities at sea to circumvent sanctions and sell oil,” he said, adding that Hezbollah and Iranian militias in Syria gain the return benefit.

The wider context, he said, is that Iran is gathering negotiating “bargaining chips” ahead of talks with Washington. Describing the “Iranian paradox,” said Rabi, “The worse things are inside Iran the more they ‘purchase’ bargaining chips on the outside.”

As the region waits to see how Washington and Tehran engage, Israel’s defensive shadow war can be expected to continue, even though it might be adjusted to avoid angering America at this sensitive time.