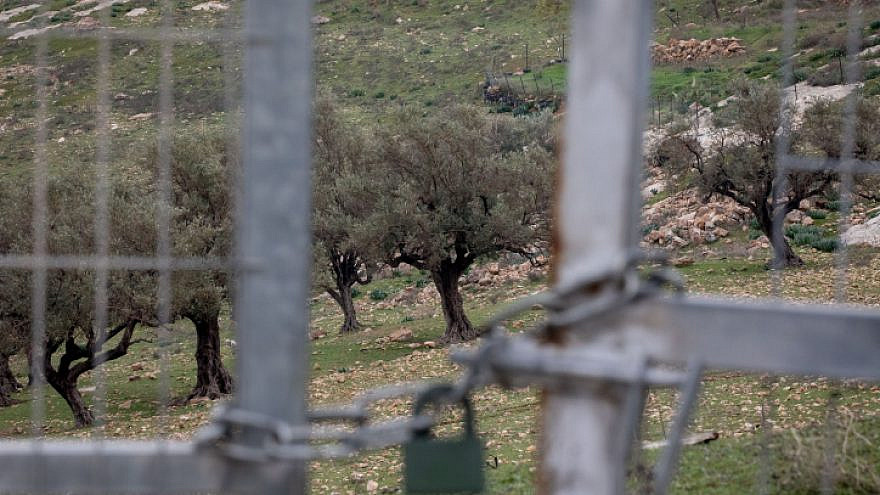 A view of the separation wall and fields of olive trees next to the eastern Jerusalem village of Abu Dis, Feb. 2, 2020. Photo by Olivier Fitoussi/Flash90.
Spread the word.
Help JNS grow!
Share now:

(December 31, 2020 / JNS) A Jordanian NGO has been planting millions of trees in Judea and Samaria as a means of “green resistance” to “liberate Palestine from the river to the sea,” according to a new report by the Zionist watchdog group Im Tirtzu.

According to the report, the Arab Group for the Protection of Nature (APN), a Jordanian group based in Amman that claims to protect the natural resources of Arab countries, is running a Million Tree Campaign, which aims to plant “trees in the Palestinian lands” as a response to Israel’s “uprooting, burning, and stealing millions of olive and other fruit-bearing trees from Palestinian lands.”

In a speech given in July this year, APN president Razan Zuaiter accused Israel of stealing Palestinian land and described APN’s “green resistance” and the need to “set strategic, short, medium and long-term steps to liberate Palestine from the river to the sea.”

The NGO, which lists the Palestinian Ministry of Agriculture as one of its partners, even received a special letter of appreciation from Jordanian Minister for Media Affairs Amjad Adaileh.

The report further revealed an interview with the “APN representative in Palestine,” Ibrahim Manasrah, who boasted of an APN activity carried out in cooperation with Salah Ali Khader Razeq. Razeq was sentenced to life imprisonment for the murder of IDF soldier Guy Friedman but was freed in the 2013 terrorist release.

“Until now we thought that the majority of silent land grabs were being perpetrated by the Palestinian Authority through illegal construction, but now we understand that the problem runs far deeper and is being perpetrated on a wider level by this Jordanian NGO through the planting of trees,” said Peleg.