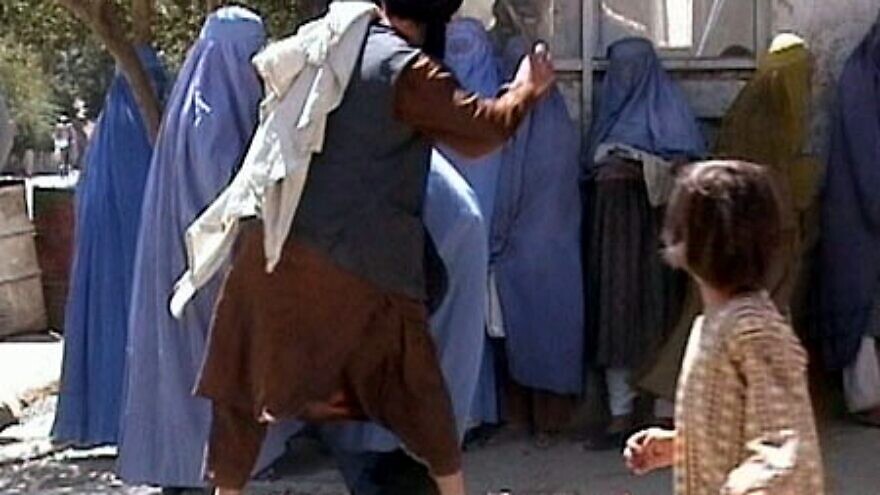 A member of the Taliban's religious police beats an Afghan woman in Kabul on Aug. 26, 2001. The footage, filmed by the Revolutionary Association of the Women of Afghanistan, can be seen at: pz.rawa.org/rawasongs/movie/beating.mpg. Credit: Wikipedia.
Spread the word.
Help JNS grow!
Share now:

(August 18, 2021 / JNS) Despite most Americans being shocked at the events unfolding in Afghanistan over the past few days, a number of Western Islamists have via social media welcomed the return of the fundamentalist Taliban forces, according to an Islamist watchdog group tracking reactions.

“While most Western Muslims are horrified by the prospect of a Taliban Afghanistan once again, far too many radical clerics from the Salafi and Deobandi traditions regard the Taliban sympathetically,” Sam Westrop, director of the Middle East Forum’s Islamist Watch project, told JNS.

In an article published on Monday at the Islamist Watch project, Westrop provided a running list of statements by Western-based Muslims.

For example, according to cleric Daniel Haqiqatjou—a prominent preacher on social media and the head of MuslimSkeptic.com: “May Allah bless and give continuous victory to those who establish the Sharia of Allah on this earth, despite the fact that the kuffar [‘infidel’] and the hypocrites hate it. You make the Ummah [‘Islamic nation’] proud!” 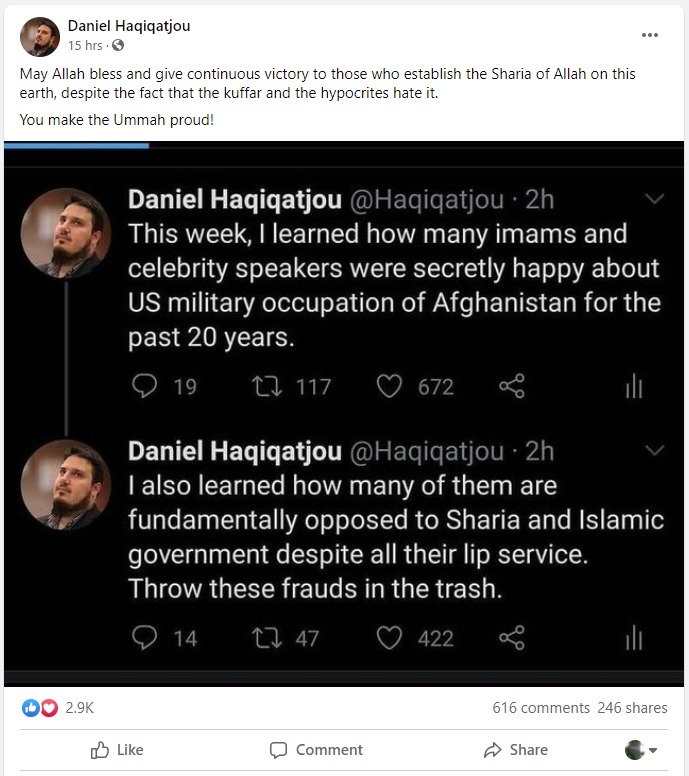 According to Yasir Nadeem Al Wajidi—a leading Indian Deobandi cleric in the United States, the director of Darul Uloom Online and lead teacher of the Institute of Islamic Education in Elgin, Ill.: “Congratulations to #Taliban and the people of Afghanistan on the rebirth of the Islamic Emirate! Allah has once again given you the opportunity to present to the world the Islamic system based on justice and fairness. Your blessed entry into #Kabul is reminiscent of the Prophetic era.”

The Deobandi movement is an Islamic fundamentalist revivalist movement within Sunni Islam that formed in India during the late 19th century and became widely practiced in Pakistan. Many of the Taliban’s leadership attended Deobandi-influenced seminaries in Pakistan.

Canadian Salafi cleric Kamil Ahmad, who lectures on Islamist TV channels Peace TV and Huda TV, and teaches at the Islamic Online University, tweeted (though it has since been deleted): “Whether you like the #IslamicEmirateOfAfghanistan (aka #Taliban) or not, they are now in power. As long as their mandate is to rule by Islam and not man-made ideologies and systems of governance, they should be supported.”

Westrop noted that “the pro-Taliban voices quoted here are not angry nobodies with Twitter accounts; they are leading voices of a resurgent, hardline force within Western Islamism.”

“Law enforcement and intelligence services should also be concerned,” he said. “Deobandi mosques in the West used to be key fundraising platforms for the Taliban and other jihadists back in the 1990s.”

He added, “If this pro-Taliban rhetoric over the past few days is a harbinger of things to come, it’s not unreasonable to expect that jihadist support networks will be established in the West once again.”