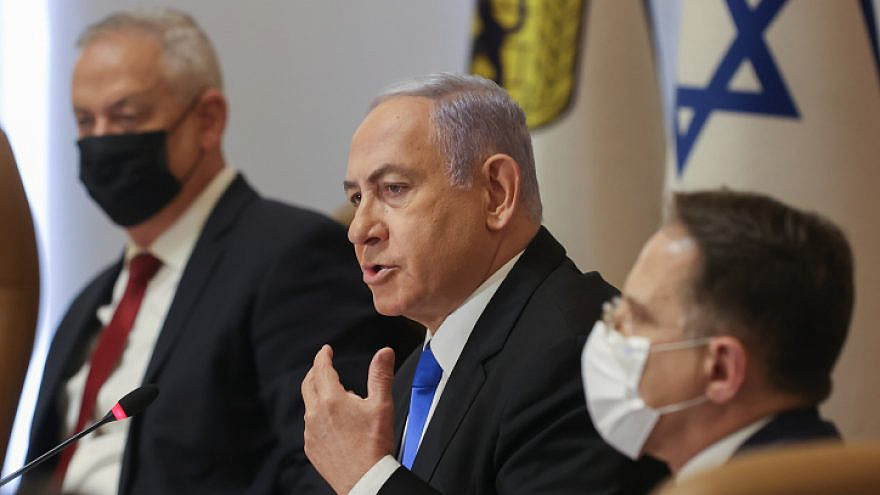 (May 9, 2021 / JNS) Speaking at a special Cabinet session on Sunday to mark Jerusalem Day, Israeli Prime Minister Benjamin Netanyahu said “agitators” were behind the recent unrest in the Israeli capital, and issued a warning to terror groups in the Gaza Strip.

“We will not allow any extremist element to undermine the quiet in Jerusalem. We will uphold law and order—vigorously and responsibly. We will continue to guard freedom of worship for all faiths, but we will not allow violent disturbances,” said Netanyahu, according to a statement from his office.

“In the same breath, I say to the terrorist organizations: Israel will respond powerfully to any act of aggression from the Gaza Strip.” he added.

Several people were reported wounded on Sunday, after Arab protesters attacked police in Jerusalem’s Old City—following morning prayers on the Temple Mount—hurling stones and chanting: “With spirit and blood, we’ll redeem you, Al-Aqsa!” The incident followed disturbances in the city on Saturday and Friday nights, in which 19 police officers and nearly 300 Arab rioters were injured.

Terrorists in Gaza launched a rocket into Israel late Saturday night that landed in an open field, according to the Israeli military. On Sunday morning, the Israeli Air Force struck a Hamas military post in southern Gaza in response. There were also disturbances along the Israel-Gaza border fence.

In response to the escalating violence, Netanyahu met over the weekend with the defense and public security ministers, the IDF chief of staff, the chief of police, the head of the Shin Bet, the head of the National Security Council and other officials, according to the statement.

Israel Police Commissioner Kobi Shabtai on Saturday ordered police presence in the capital boosted in preparation for the end of Ramadan and “another series of events expected in the city in the coming days,” an apparent reference to Jerusalem Day.

A national Israeli holiday commemorating the reunification of the capital following the 1967 Six-Day War, Jerusalem Day is marked by official ceremonies and memorial services, including a Flag March in which tens of thousands of Israelis walk through the Old City. According to Israeli media reports, security officials are considering restricting or even canceling this year’s Jerusalem Day events due to the increased tensions in the city.

“Every archaeological find attests to the strength of this link. We are uncovering Jerusalem’s past even as we ensure its future,” he added.

The city had now been united under Israeli rule for 54 years, said Netanyahu, noting that in thousands of years of Jewish and foreign rule over Jerusalem, only under Israeli sovereignty has “full and consistent” freedom of worship been ensured for people of all faiths.

“At the same time, we are developing Jerusalem in every sphere: construction, transportation infrastructure, employment, high-tech and science, heritage, culture, the arts and more,” he said.

“I say to our best friends as well: Jerusalem is the capital of Israel. Just as every people builds its capital and in its capital, so too do we reserve the right to build Jerusalem and in Jerusalem. This is what we have done and what we will continue to do,” he said.