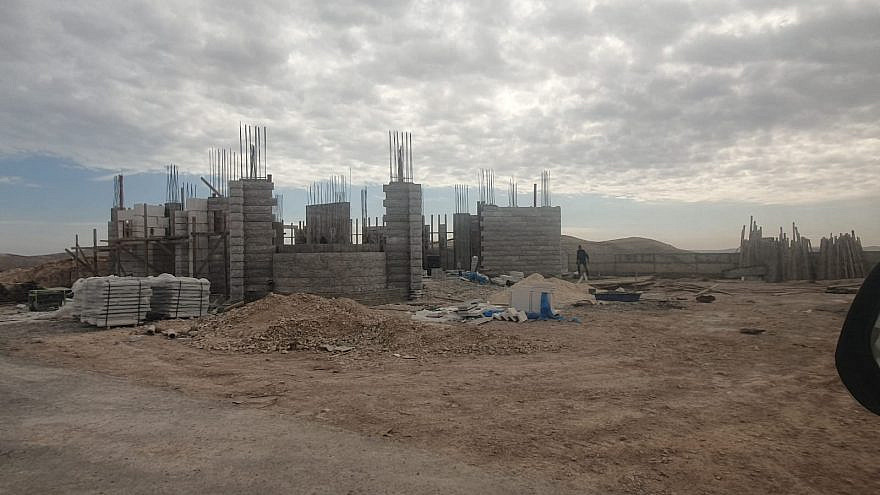 An Arab town being constructed in Area B of the West Bank, in violation of the Oslo Accords, Jan. 24, 2023. Credit: Gush Etzion Regional Council spokesman.
Spread the word.
Help JNS grow!
Share now:

(January 24, 2023 / JNS) Yesha Council head Shlomo Ne’eman on Tuesday called for an immediate halt to the illegal construction of an Arab town in the Judean desert, in violation of the Oslo Accords.

The town is being built on land which the 1993 Oslo Accords stipulates must remain barren, and will potentially cut Gush Etzion off from Judean Desert, said Ne’eman, who also heads the Gush Etzion Regional Council.

Moreover, a sign in Arabic along a road leading to the site suggests that it is being built with foreign funding, in cooperation with the Palestinian Authority, he noted.

“This is what lawlessness looks like. Welcome to the Oslo Accords! According to the agreements, nothing is to be built here, it is to remain an untouched, barren desert,” said Ne’eman.

“But what is the reality we are seeing here? We see the establishment of an Arab town in every way shape and form, with infrastructure, water sources, roads, pouring of concrete, trucks, everything. This all must stop,” he added.

“We expect the new government, from Defense Minister [Yoav Gallant] to Minister within the Defense Ministry [Bezalel Smotrich] to get involved and establish order,” he continued.

The comments came amid friction within the government, after Gallant on Friday ordered the demolition of the Or Chaim outpost.

Smotrich has been tasked by Netanyahu with overseeing the Civil Administration, the ministry’s body responsible for approving construction and handling other bureaucratic matters in Area C of Judea and Samaria.

Israeli activists attempted on Sunday to rebuild the outpost, but were stopped by security forces. Several activists were arrested. A statement released on behalf of the families building Or Chaim said they would “continue to hold on to the hilltop even if we are evacuated 100 times.”

“I believe in the rule of law, but there cannot be one law for Arabs and one law for Jews. The law should also be enforced for Khan al-Ahmar and dozens of illegal Arab outposts,” said Ben-Gvir.

He circulated a document during the Cabinet meeting outlining illegal structures built by Arabs in Judea and Samaria over the past month, and demanded that they also be destroyed.

Knesset member Danny Danon (Likud) on Monday morning led a fact-finding visit to a hilltop overlooking the encampment. The gathering was also attended by Likud MK Yuli Edelstein, the chairman of the Foreign Affairs and Defense Committee, and comes ahead of the Feb. 1 deadline set by the Supreme Court for the government to disclose its plans for demolishing the illegal community.

Danon said during a briefing that “when it comes to illegal building in Judea and Samaria, there can’t be double standards. We saw what happened last Friday when the authorities evacuated a Jewish community that was built illegally, but look what’s happening here. You have an illegal Palestinian community that is not being evacuated despite the ruling of the Supreme Court. We are calling on the prime minister of Israel to say clearly to the Supreme Court that this illegal settlement will be evacuated as soon as possible.”

According to Regavim, there are more than 170 illegal outposts in Area C of Judea and Samaria, created by the Palestinian Authority and funded by the European Union.