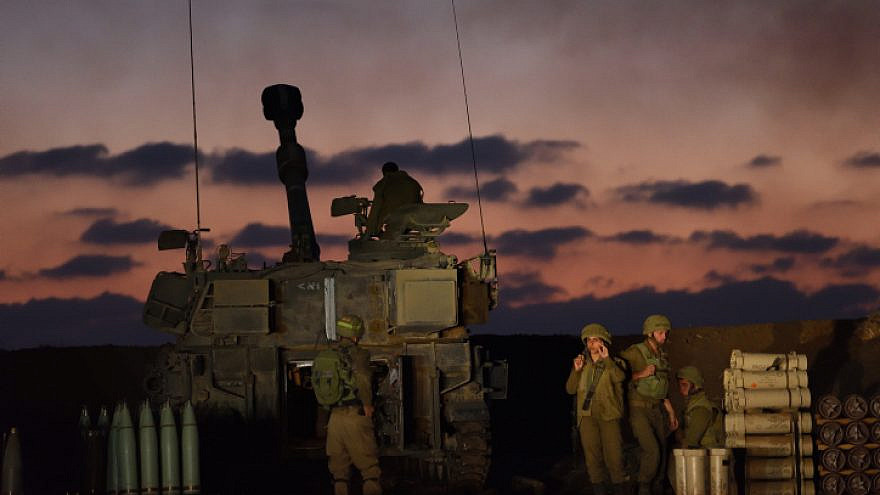 An Israel Defense Forces artillery unit near the border with Gaza on May 13, 2021. Photo by Gili Yaari /Flash90.
Republish this article
949 WORDS
Spread the word.
Help JNS grow!
Share now:

(May 13, 2021 / JNS) Almost the minute Israel fully withdrew from the Gaza Strip in September 2005, the area became a hotbed of terror. Some 18 months later, after Hamas seized the territory in a violent coup from its internal Palestinian rival, Fatah, the Islamist-ruled enclave had turned into a heavily armed fortress, which hosts a terrorist army that is funded and assisted by Iran.

On Thursday night local time, the Israel Defense Forces announced on Twitter that “air and ground” troops were striking targets in the Gaza Strip.

Israeli Prime Minister Benjamin Netanyahu said Hamas “will pay a heavy price” for its barrage of rockets on the Jewish state, nearly 2,000 and counting.

“I said that we would exact a very heavy price on Hamas; we are doing this, and we will continue with great force. The final word has not been said, and this operation will continue for as long as needed,” declared the Israeli leader, according to the Prime Minister’s Office.

Israel has been reluctantly dragged into three large armed conflicts with Hamas and Palestinian Islamic Jihad (PIJ) prior to the current escalation, in addition to smaller rounds of fighting. With each truce, Gaza’s terror factions and the IDF study the battles, draw lessons and build up their capabilities accordingly, for the next round.

As the current firepower of Hamas and PIJ demonstrates, Gaza’s factions have not been resting on their laurels in recent years, exploiting a period of quiet to create a domestic industry of weapons production.

According to figures from the research department of the Alma Research and Education Center, the Iranian-backed PIJ has some 10,000 operatives—half of them armed combatants—and prior to now was armed with some 10,000 rockets, most of them up to a range of 45 kilometers.

Hamas, for its part, has a military wing with as many as 35,000 members, of which between 10,000 to 15,000 are armed combatants, and the remainder are in combat support, force build-up and administrative roles. Of the armed combatants, about one-third are members of the elite Nukhba unit.

Some of these projectiles are industrial-made Iranian or Chinese rockets, though many are manufactured as part of Gaza’s weapons industries.

A number of options to confront Hamas, none of them ideal

Faced with this threat, Israel has four fundamental options at its disposal.

The first is to accept temporary ceasefires that do not last long. This would become reality if Israel’s deterrence fails to be restored. Under this scenario, Hamas’s decision to use its firepower to gain political points or extort Israel could occur frequently. A failure by Israel to restore its deterrence and to extract a high price from Hamas for its aggression that began on Monday, when it fired on Jerusalem as part of its internal power struggle with Fatah, could easily lead to such a reality.

The second option is to deal a severe blow to Hamas and PIJ’s capabilities and roll them back by years. An intense round of fighting that relies on Israel’s firepower and intelligence capabilities, supported by limited ground maneuvers, could in theory restore Israel’s deterrence, but it remains unclear for how long.

A third option is a full ground offensive to topple the Hamas regime and seize the whole of Gaza. The IDF is perfectly capable of doing this, despite the fact that it would involve extremely challenging urban warfare scenarios that would be costly in the lives of its soldiers.

The IDF has sent two infantry brigades and one armored brigade, as part of its 162nd maneuvering division, to the Gaza border and placed them under the command of its Gaza territorial division. That step was preparation for potential ground offensives. The forces are also helping ensure that the border remains sealed to Hamas cross-border raids.

Should Israel choose to topple the Hamas regime, it would find itself in an extremely unenviable situation with two additional fundamental choices. The first is to occupy roughly 2 million hostile Palestinian residents and go on to rule the Strip. The second is to search for someone else to rule Gaza; the idea that Fatah would be able to take on that role is highly unlikely.

Fatah would lose all of its remaining legitimacy if it was seen by Palestinians to “ride into Gaza on Israeli tanks,” and its ability to remain intact as a regime there without daily Israeli military backing is in great doubt, as the incidents of 2007 demonstrate.

Should Israel leave Gaza and no regime take power, the territory could become a Somalia-like failed state zone, brimming with jihadist gangs that would be impossible to deter for any amount of time.

A fourth possibility, however, could involve the idea of a broad assault on Hamas’s military wing, but keeping its police force and political wing intact. This could potentially enable the IDF to withdraw and not see Gaza disintegrate into a Somalia-like failed state chaos, and to have a “central address” for ruling purposes, even if it remains hostile. Under such an option, Hamas could survive and begin to rebuild its capabilities, though it would take it years to recover.

The current situation is extremely dynamic and changing hour by hour.