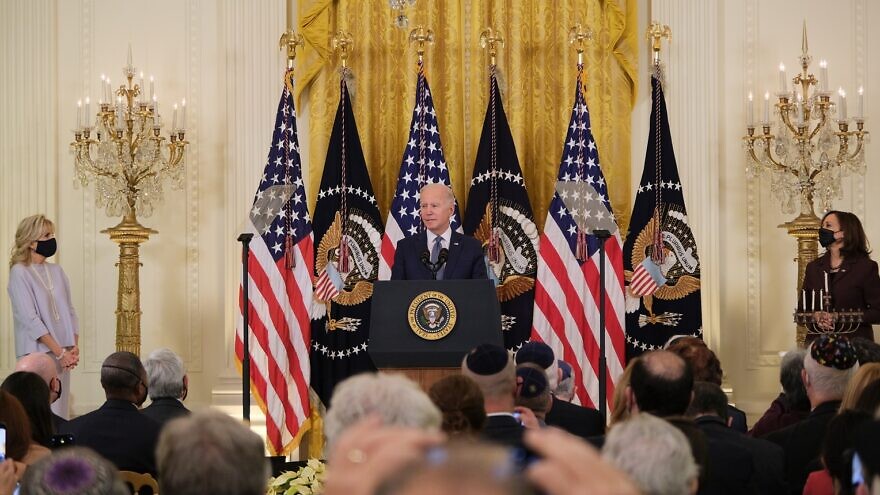 (December 2, 2021 / JNS) The annual lighting of the Hanukkah menorah in the White House continued on Wednesday night, although with a smaller than usual crowd, as Jewish leaders and supporters of the Biden administration gathered in the East Room for the White House’s official holiday celebration.

Pointing out the rising incidents of anti-Semitism in the United States, U.S. President Joe Biden called for a nation to return to its heritage of acceptance and kindness.

“You know, we’re the most unique nation in the world. We’re the only nation that’s not based on ethnicity or religion or race. We’re based on an idea,” he told the approximately 150 attendees, not including media, in the backdrop of a room decked out in Christmas decorations.

“ ‘We hold these truths to be self-evident, that all men’ and women ‘are created equal,’ ” Biden said. “… and our basis of our strength is not the example of our power, but the power of our example.”

Early in his speech, he praised some of the prominent Jewish members of his administration at the event, including Attorney General Merrick Garland; Homeland Security Secretary Alejandro Mayorkas; director of the office of science and technology policy and science adviser to the president Eric Lander; and his nominee for Special Envoy to Monitor and Combat Anti-Semitism, Emory Professor and Holocaust historian Deborah Lipstadt. He also praised Senate Majority Leader Chuck Schumer (D-N.Y.).

Biden spoke about his frequent visits to Israel and personal acquaintance with every Israeli prime minister since Golda Meir—retelling his interactions with Meir as he did during a meeting current Prime Minister Naftali Bennett in August.

However, Biden appeared to claim that he met with Meir and served as a liaison between Israel and Egypt during the 1967 Six-Day War, despite being in law school at the time.

“I have known every — every prime minister well since Golda Meir, including Golda Meir,” Biden said. “And during the Six-Day War, I had an opportunity to — she invited me to come over because I was going to be the liaison between she and the Egyptians about the Suez.”

Nevertheless, Meir did not serve as prime minister until 1969, two years after the Six-Day War and appeared to instead be referring to a meeting he had with her prior to the October 1973 Yom Kippur War.

The president also quoted his longtime friend and staff member, the late California congressman and Hungarian Holocaust survivor Tom Lantos, who said, “The veneer of civilization is paper thin. We are its guardians, and we can never rest.”

“Well, it’s paper thin. And we are its guardians. All it takes is an opening, a sliver, a crack, the briefest nod of acceptance or legitimacy for ancient evils that have long plagued our society to come rushing in. And you all know it,” said Biden. “We just saw an incident so horribly anti-Semitic—fliers being left at people’s homes in Los Angeles—we have to stand against the resurgence of this tide of anti-Semitism, and other forms of intolerance and hate here at home and around the world.” 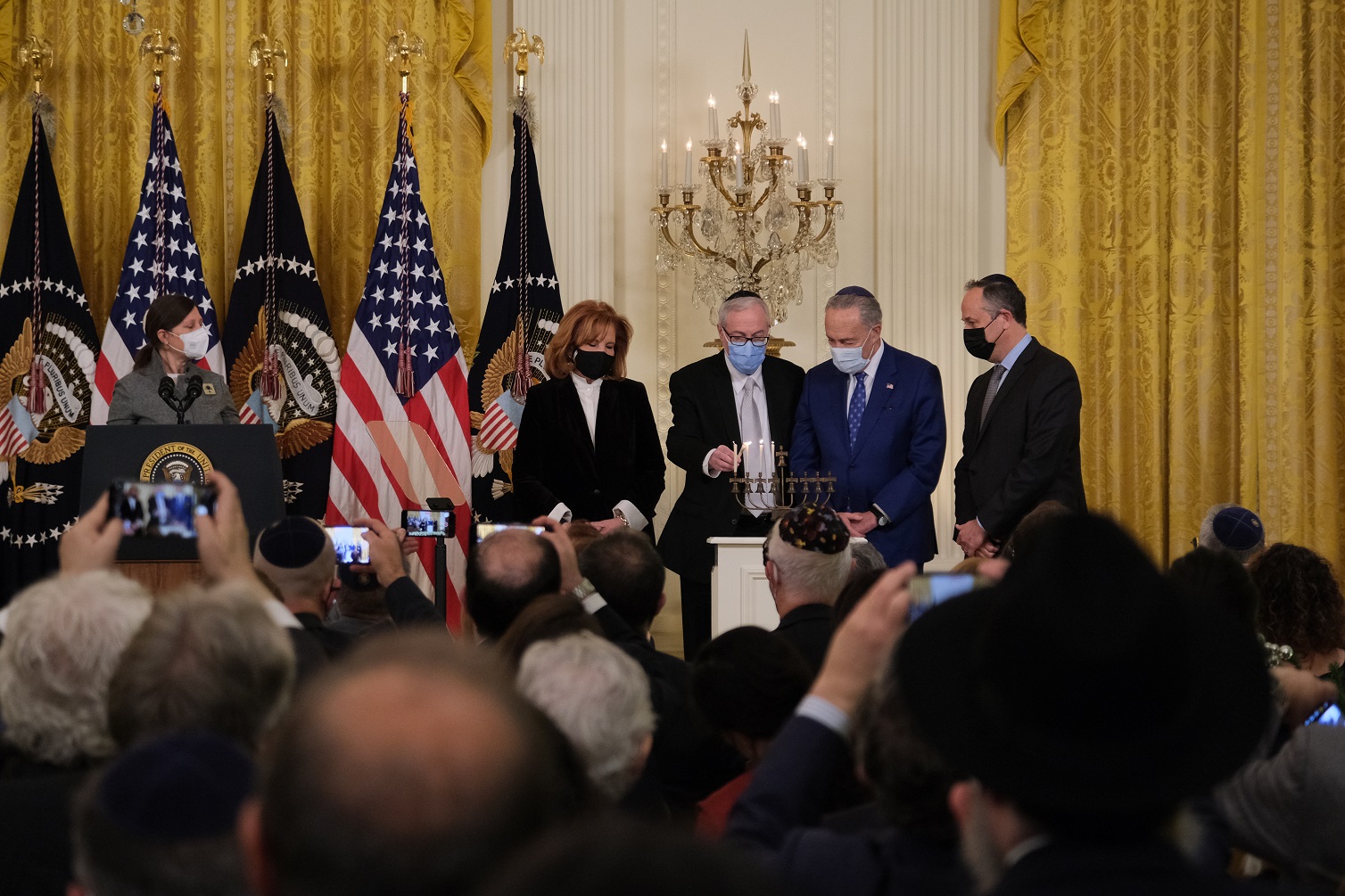 The president then tied this to his administration’s campaign slogan of “Build Back Better.”

“You know, when we light this menorah in the White House, when Jewish families place menorahs in their windows, we are proclaiming liberty,” said Biden. “We’re exercising the freedom that the Maccabees sought to simply practice their faith. And we’re showing that there is still light—that even the most fragile flame can be sustained in a tradition and nourish the soul of a people.”

‘Celebrating the ‘miracle of life’

Biden spent part of his speech describing the White House menorah, called the Liberty Bell menorah, on loan from the National Museum of American Jewish History in Philadelphia. It was designed by Holocaust survivor Manfred Anson using parts of souvenirs he collected and featured the phrase from Leviticus found on the Liberty Bell, “Proclaim liberty throughout all the land unto all the inhabitants thereof.”

He was joined on stage by his wife, First Lady Jill Biden, U.S. Vice President Kamala Harris and Second Gentleman Doug Emhoff—the first Jewish spouse of a vice president. All three also spoke at the ceremony before Biden.

Jill Biden reminded the attendees of the immense sacrifices Americans had to face in the past 24 months because of the ongoing coronavirus pandemic, celebrating the “miracle of life” and praising the nurses, educators and military families who persevered through one of the most difficult periods in American history. Emhoff talked about his Jewish heritage.

Harris said that Hanukkah is one of her family’s favorite celebrations and spoke about how the Hanukkah tradition has provided hope throughout generations.

“We all know for 2,000 years, these important lessons have been a beacon for people around our world. As Jews have gathered to light the menorah, a tradition that has endured—yes, during moments of darkness. A tradition that has endured in moments also a celebration,” she said. “We have known and always know that we will not be deterred—that we will not be distracted from what we know is good, and our commitment and an enduring commitment to good.” 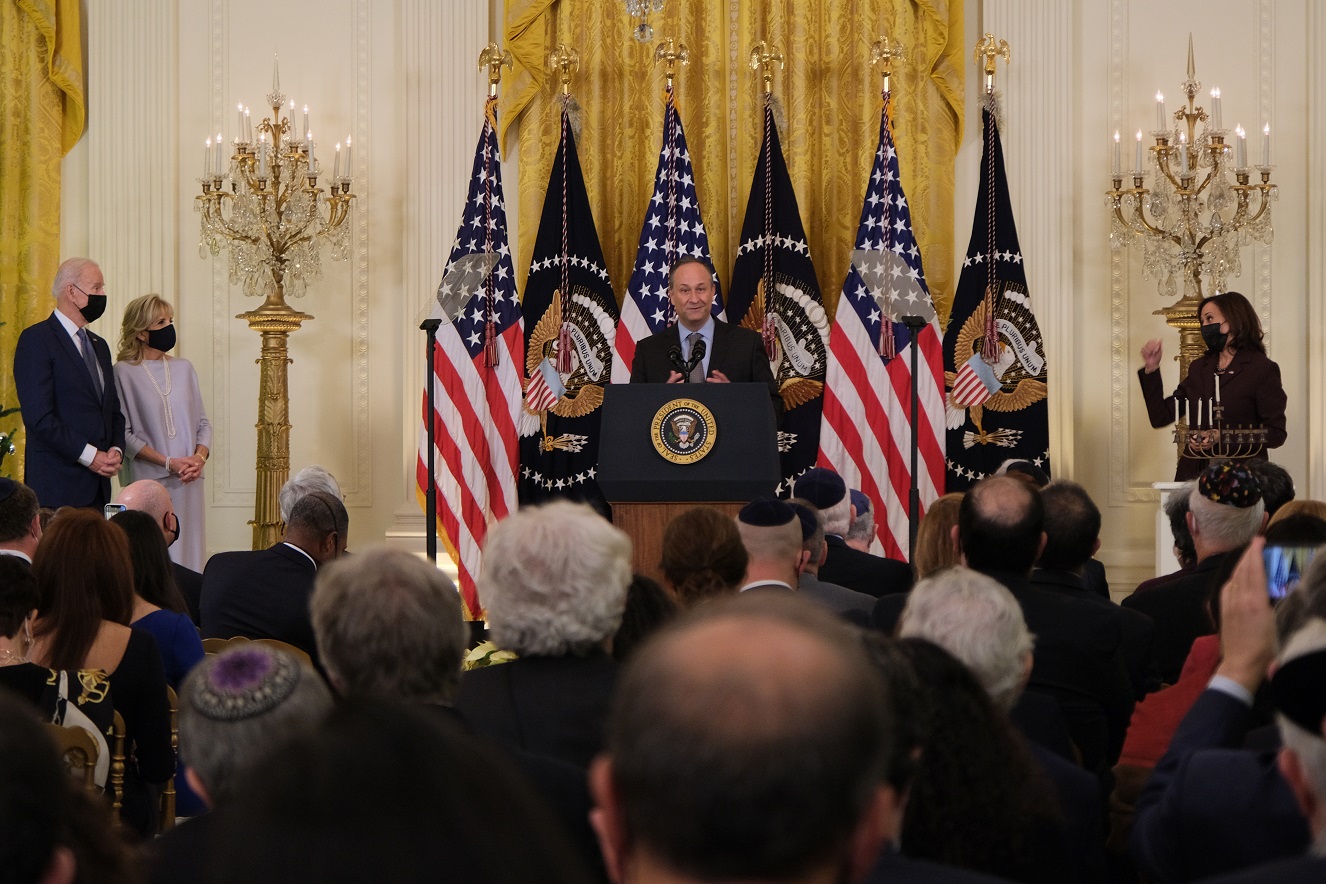 Second Gentleman Doug Emhoff speaks at the Hanukkah celebration in the East Room of the White House on Dec. 1, 2021 Photo by Dmitriy Shapiro.

“These past 24 months have been harrowing. Rabbis like myself carried shovels in our trunks because that was the amount of funerals we were doing weekly. We felt this pandemic more than I can express. We have all experienced enormous loss throughout this pandemic, and, of course, it is not over,” said Holzblatt. “But Hanukkah reminds us that light can grow even amidst the darkest times, and we have been blessed by awesome light—vaccines, science, leadership built on love, honesty, human dignity and leaders that are committed to ensuring a vibrant, healthy planet for our children and our children’s children.”

Holzblatt said that the tradition of lighting one candle at a time was taught by the Jewish sage Hillel, with the light increasing each night.

“Our charge is not to keep the light only for ourselves, and we know that. We don’t keep it trapped, we don’t keep it privatized, we don’t safe it for the few,” she said. “We are told rather that we should place the hanukiyah in our windows or even outside of our doors … so that we may publicize this miracle and share its light.

“Let us grow, share and be inspired by these lights together, and let us build back better.”

She then led the audience in the prayers for lighting the menorah as the shamash (the “helper candle”) and four candles were lit by Schumer, Emhoff, Glatt and Jewish community leader Susan Stern.

William Daroff, CEO of the Conference of Presidents of Major American Jewish Organizations, said later in an interview, “I thought it was wonderful. To be able to celebrate the Jewish people, the Jewish holiday, Jewish continuity in this building—the White House, the citadel of freedom and democracy, a place that for many, many years we were not welcome—is just a delight. To have the menorah lit here, to have the seat of government pause and focus on our people is important,”

He added that “President Biden choosing to speak about the scourge of anti-Semitism facing our nation and to shine a light on anti-Semitism is a message that all of America must hear, and he is an amazing vehicle to spread that message and we are very encouraged by that.”