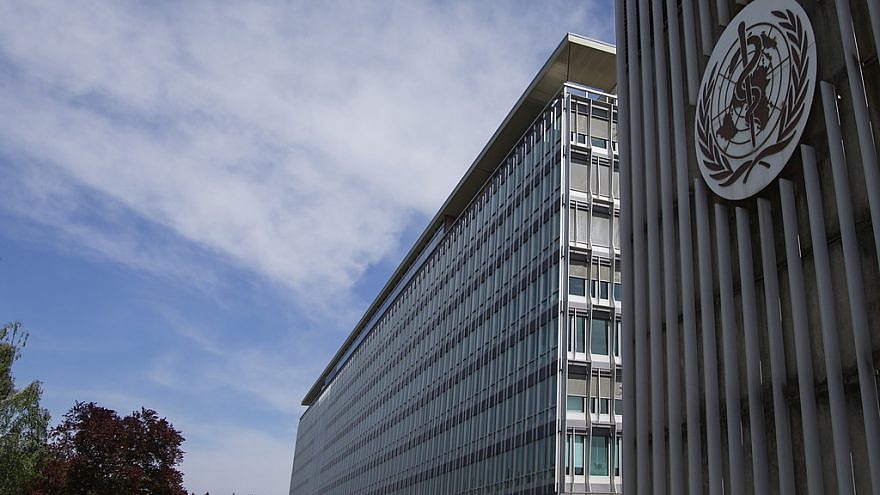 (May 27, 2021 / JNS) The World Health Organization held a special session on Tuesday singling out and passing a resolution against Israel for allegedly violating the health rights of Palestinians.

During the session, which took place in the context of the annual World Health Assembly, Israel was condemned in speeches by 25 countries, including Iran, Lebanon and Turkey.

The session concluded with the adoption of a resolution calling for “non-discriminatory, affordable and equitable access to COVID-19 vaccines” for Palestinians in the disputed territories and Syrians in the Golan Heights.

The resolution also requires the WHO to prepare a new report on “Health conditions in the occupied Palestinian territory, including east Jerusalem, and in the occupied Syrian Golan,” to be submitted to next year’s World Health Assembly.

“Of 34 items on the assembly’s agenda, only one, Item 25 targeting Israel, focused on a specific country.”

In what appeared to be a reference to the 11 days of fighting this month between Israel, Hamas and other terror factions in the Gaza Strip, the resolution also calls for an assessment of “the extent and nature of psychiatric morbidity, and other forms of mental-health problems, resulting from protracted aerial and other forms of bombing among the population.”

The resolution was harshly criticized by Geneva-based nonprofit group U.N. Watch, whose executive director, Hillel Neuer, called it “cynical politicization of the world’s top health agency at the expense of focusing on the COVID-19 pandemic and other vital global health priorities and emergencies.”

According to U.N. Watch, the resolution fails to mention either Hamas or Palestinian Islamic Jihad.

“Of the 34 items on the assembly’s agenda, only one, Item 25 targeting Israel, focused on a specific country,” said Neuer.

“There was no agenda item or resolution on any other country, conflict, civil war or political impasse—not on Syria, where hospitals and other medical infrastructure are repeatedly and deliberately bombed by Syrian and Russian forces; not on war-torn Yemen, where 18 million are in dire need of health assistance; and not on Venezuela, where the health system is in a state of collapse and 7 million people are in need of humanitarian assistance,” he said.

“Today’s assault on Israel at the WHO promoted the lie that Israel is harming Palestinian health rights,” said Neuer. “The opposite is true.”

The Netherlands, Austria and Colombia shifted their votes from “abstain” last year to “no” on Tuesday, joining the United States, United Kingdom, Australia, Brazil, Cameroon, Canada, Czech Republic, Germany, Honduras, Hungary and Israel, all of whom voted “no” last year as well. Poland, Malta and Monaco shifted from “yes” to “abstain.”

The United States not only voted against the resolution but also took the floor to object to the politicization of the forum.

“However, amid a global pandemic, the minority of E.U. member states and other democracies who voted for the resolution should be ashamed, including France, Spain, Switzerland, Belgium, Portugal, Japan, India, Ireland, New Zealand and Luxembourg,” said U.N. Watch in a statement. “These countries have now encouraged the continued hijacking of the world’s health priorities—and the diversion of precious time, money and resources to fight global disease—in order to wage a political prosecution of Israel.”