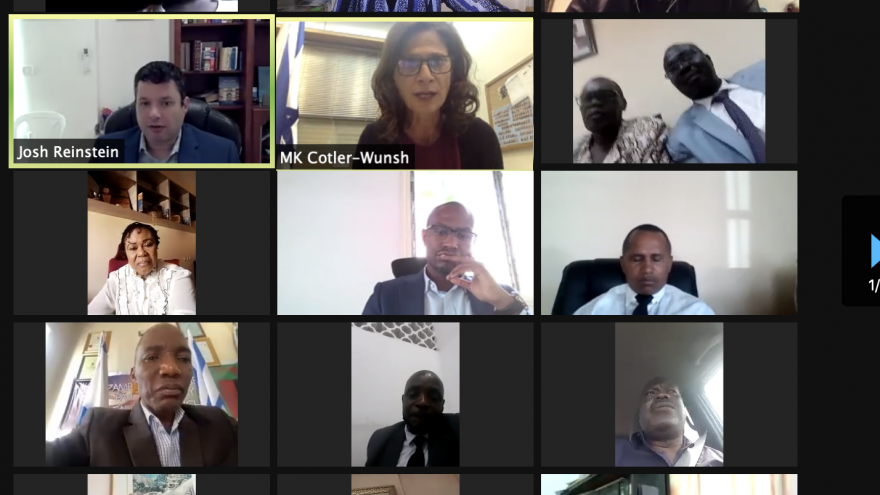 (December 31, 2020, Jerusalem, JNS Wire) African lawmakers from 16 countries are participating in a two-day virtual conference organized by the Israel Allies Foundation (IAF). The program opened today with remarks from both the Knesset Speaker Yariv Levin and Deputy Speaker of the Zambian National Assembly Mwimba Malama. Levin thanked the parliamentarians, all Chairmen or Members of the Israel Allies Caucus in their respective countries, for their contributions to the partnership between Africa and Israel. “Your consistent daily efforts standing for Israel and for our common values is what ensures the strength of our ties and allows us to continue having a positive impact together” said Levin.

Deputy Speaker Malama highlighted Africa’s fluctuating relationship with Israel over time, which started off strong but then tapered off after the Yom Kippur war when several sub-Saharan countries severed diplomatic ties with Israel. “It is therefore gratifying to note that in recent years, a number of sub-Saharan countries have re-established diplomatic relations with Israel. The State of Israel has made remarkable contributions to world development in general and Africa in particular. I have no doubt in my mind that as the Israel – Africa alliance continues to strengthen, the continent of Africa, and Zambia in particular, will greatly benefit in sectors such as agriculture, security, science and technology.”

Member of Knesset Michal Cotler-Wunsh, an active member of the Knesset Christian Allies Caucus, spoke with the African lawmakers as well and encouraged them to consider expanding efforts in the international arena in addition to their business collaboration with Israel. “There is tremendous opportunity that must be identified and realized in the growing relationship between Israel and African countries, including in trade, technology, agriculture, and beyond” said Cotler-Wunsh. “Africa has a significant voice in the international arena – at the United Nations and at the International Criminal Court – with it comes tremendous responsibility to ensure reform that stands by international law and rights.”

Israel Ambassador to Zambia Gershon Kedar boldly pointed to the significant number of African countries which vote against Israel in the UN, when in reality many countries are supporters of Israel. “Israel has many good relations with individual African countries, but it is time to turn these bilateral relationships into a multilateral one by strengthening Israel’s ties with Africa as a whole in international forums. It is essential for African parliamentarians to reflect the voices of their constituents and change the current policy of voting against Israel in the UN and other bodies as well as allow for Israel to have an observer status in the African Union” said Kedar.

IAF President Josh Reinstein highlighted the tremendous growth that the IAF network has experienced in recent years in Africa under the leadership of IAF Africa Director Bishop Scott Mwanza. “The essence of the mission of the IAF is what we call faith-based diplomacy. As both parliamentarians and believers in the Bible,  you have an opportunity to translate your Biblical support into real political action through your parliamentary work. Thank you for your strong stand for Israel. We look forward to continuing to expand the IAF network in Africa” said Reinstein.

Republish this article
About The Publishers
Israel Allies Foundation
The Israel Allies Foundation is an umbrella organization that coordinates the work of 50 Israel Allies Caucuses around the world in order to mobilize political support for Israel based on shared Judeo-Christian values. This network includes the Knesset Christian Allies Caucus, the Congressional Israel Allies Caucus, and the European Union Parliamentary Israel Allies Caucus.
Publish your organization's press release on JNS Wire
Releases published on the JNS Wire are communicated and paid for by third parties. Jewish News Syndicate, and any of its distribution partners, take zero responsibility for the accuracy of any content published in any press release. All the statements, opinions, figures in text or multimedia including photos or videos included in each release are presented solely by the sponsoring organization, and in no way reflect the views or recommendation of Jewish News Syndicate or any of its partners. If you believe any of the content in a release published on JNS Wire is offensive or abusive, please report a release.