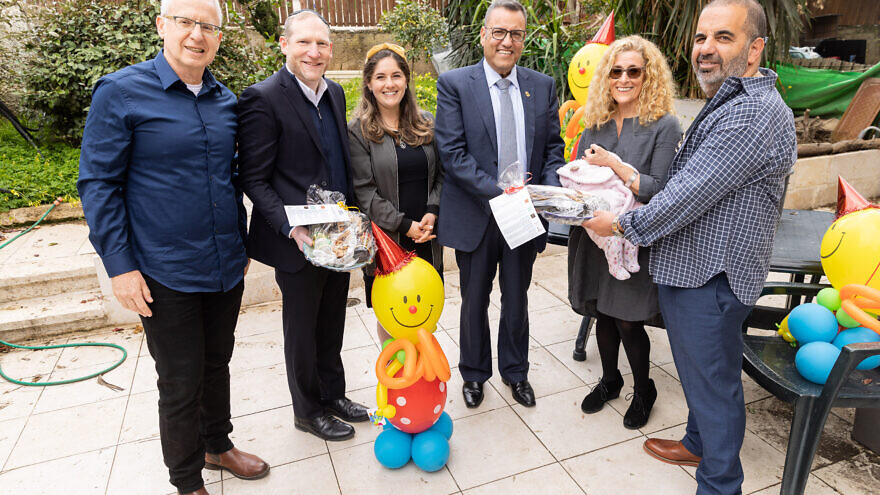 The gifts were given to Leslie (59) and Michael (61) Windman, who made Aliyah two months ago from Coconut Creek, Florida to Jerusalem. There, they reunited with their daughter, Rochelle, who made Aliyah as a lone soldier in 2015, as part of the Nefesh B’Nefesh – FIDF Lone Soldiers Program. She fulfilled her military service as a combat engineering instructor, where she met her Israeli-born husband, Yehonatan. The couple welcomed their first child, Claire Shoshana, last month.

The Mishloach Manot contained a beer package from BeerBazaar, established by Avi Moskowitz, who made Aliyah from the United States; Hamantaschen from Tzomet HaCupcake, a boutique bakery owned by Ro Oranim, also originally from the United States and fresh ground coffee packages from Power Coffeeworks, founded by Brandon and Stephanie Trigger, originally from South Africa. The products were served on a hand-made ceramic platter from Hadara’s Clay Studio, owned by Hadara Rabinowitz who made Aliyah from the United States, and the package was accompanied by festive clown shaped balloons from Jerusalem Balloons, a balloon company for personalized gifts and special occasions, owned by Kate Salasnik, a newcomer from London, UK.

“I was delighted to meet Leslie and Michael Windman, a Jerusalem-based couple, who have quickly adapted to our great city thanks to the support and love that has enveloped them since their arrival. It was extremely exciting for me to meet a three-generation family of Zionists who immigrated to Israel and settled in Jerusalem,” said Mayor of Jerusalem, Mr. Moshe Lion. He added that “Last year, 1,322 people immigrated to Israel and settled in Jerusalem, and for that I would like to congratulate all those who work tirelessly to encourage Aliyah, and sincerely hope that at the end of the year we will see even more immigration to the Capital.”

“It is extremely fulfilling to meet, together with our dear friend and partner, Mayor Moshe Lion, three generations of Olim who have established their homes in Jerusalem. We are continuously inspired by the dedication of all Olim to the Jewish State and the impact they make daily in every facet of life in Israel, especially in its capital,” said Rabbi Yehoshua Fass, Co-Founder and Executive Director of Nefesh B’Nefesh. “It is a true pleasure to meet and offer our appreciation to this inspiring family of Olim and pray together for all Jews worldwide to merit a joyous and peaceful holiday.”

Nefesh B’Nefesh, in partnership with the Ministry of Aliyah and Integration, the Jewish Agency for Israel, Keren Kayemeth LeIsrael, and JNF-USA, reports that in 2021, 1,322 new Olim from North America moved to Jerusalem. This is the highest annual figure the organization has recorded in the last three years, in comparison to 877 newcomers in 2019 and 885 in 2020. Jerusalem currently stands as the number one destination for Olim from North America, with the following leading professions: medicine, education, law, sales, and social work.

The Windmans responded to the surprise visit: “It is a pleasure to host and meet in person the Mayor and Rabbi Fass, and we are grateful to both of them for the exciting Purim surprise.” They added: “We have always been Zionists and had a strong Jewish home. When we came on a visit to Israel for the first time in 2006, our daughter fell in love with the country and knew she wanted to live here. It was after her service as a lone soldier and our many visits over the years that inspired us to want to live in Jerusalem alongside her. Only after our Aliyah application was in, did we find out she was pregnant. The timing was impeccable and now we feel so blessed to live down the street from our first grandchild in the country’s capital.”

Republish this article
About The Publishers
Nefesh B'Nefesh
Publish your organization's press release on JNS Wire
Releases published on the JNS Wire are communicated and paid for by third parties. Jewish News Syndicate, and any of its distribution partners, take zero responsibility for the accuracy of any content published in any press release. All the statements, opinions, figures in text or multimedia including photos or videos included in each release are presented solely by the sponsoring organization, and in no way reflect the views or recommendation of Jewish News Syndicate or any of its partners. If you believe any of the content in a release published on JNS Wire is offensive or abusive, please report a release.