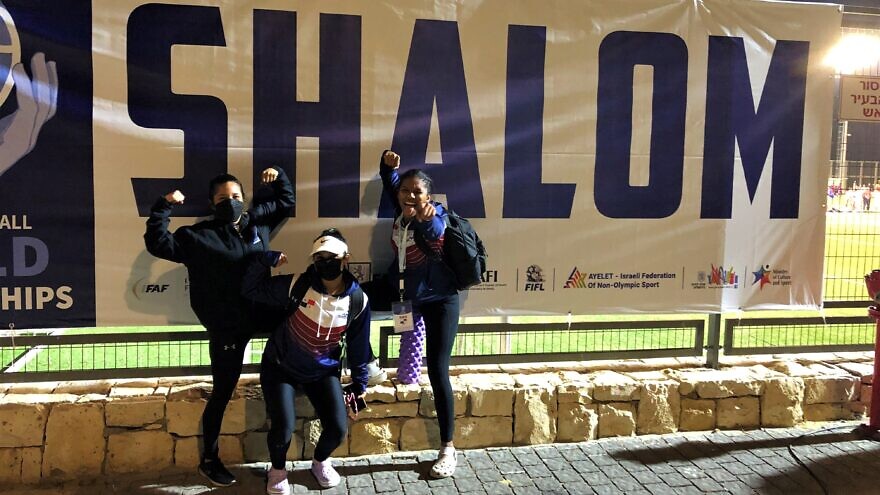 (December 10, 2021 / JNS) Thirty-nine teams from 23 countries around the world gathered in Israel this week for the International Federation of American Football’s (IFAF) 10th Flag Football World Championship, hosted by the American Football in Israel (AFI) organization at the Kraft Family Sports Campus in Jerusalem.

After three days of intense competition, both the USA men’s and women’s national teams took home gold medals, each needing comeback wins in the finals to defeat Team Mexico’s talented men’s and women’s squads respectively, who both walked away with the silver.

Team Panama reached the podium with a third-place finish in the men’s bracket, as the Austrian women joined them by securing a bronze medal as well.

The top eight finishers in both the men’s and women’s divisions automatically qualified for the 2022 World Games in Birmingham, Ala., featuring the highest level of competition in non-Olympic sports. It will mark the first time that flag football will be featured at that event. The hope is that flag football will become an official sport in the 2028 Los Angeles Olympic Summer Games. 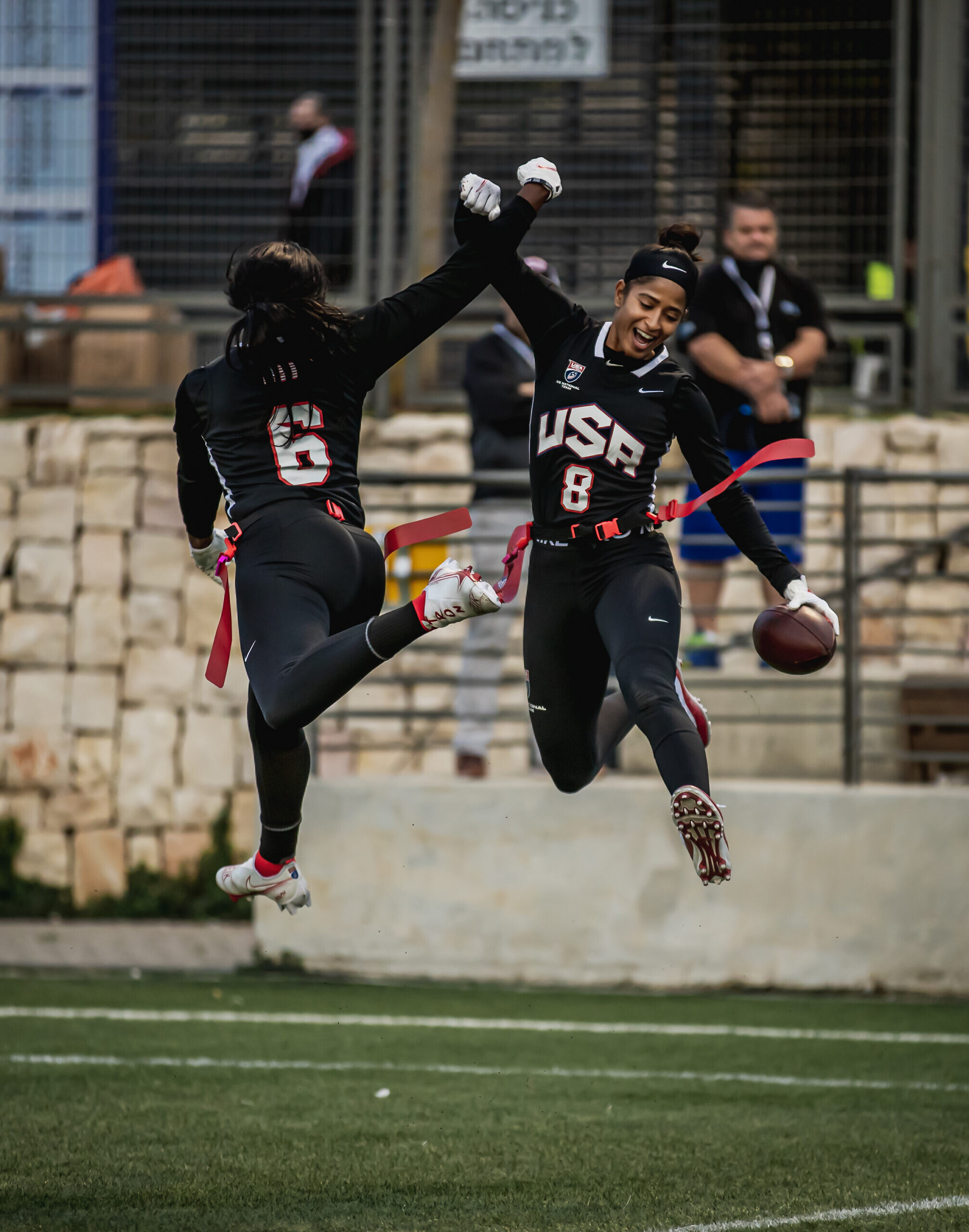 Unfortunately for the host country, Israel’s men’s national team, which came into the tournament ranked fifth in the world, finished in ninth place, with the women securing the 12th slot, leaving both teams out of the World Games.

The AFI was relieved that the tournament wasn’t canceled at the last minute, as just days before the Israeli government implemented COVID-19 travel restrictions, essentially banning all non-Israeli citizens from entering the country with limited exceptions.

League representatives scrambled behind the scenes lobbying officials in order to get special permission for the more than 800 players, coaches, trainers, referees, media and others to enter Israel, while implementing tight health-safety restrictions throughout the entire tournament.

If that wasn’t challenging enough, weather forecasters predicted a torrential wind and rain storm for Jerusalem on the final day of competition, forcing a venue shift from the Kraft Family Campus to Jerusalem’s Teddy (Kollek) Stadium just several hours before the medal-round games took place. Fortunately, the rain held off for the most part, and the large stands in the 34,000-seat stadium blocked the intense wind, allowing the games to continue unhampered.

Steve Leibowitz, president of American Football in Israel and the head of the local organizing committee for the tournament, told JNS that hosting an international competition in the midst of a pandemic with all of the paperwork involved and safety measures implemented “was the most difficult project I have ever been involved with.”

In regard to the competition itself, Leibowitz said “flag football is a growing sport. The game is only growing stronger around the world, and we in Jerusalem had an opportunity to help make that happen. I can’t thank [New England Patriots owner] Robert Kraft enough along with our other generous sponsors.”

Kraft, along with his late wife Myra, has philanthropically been a top supporter of the sport in Israel for the past two decades, with the stadium in Jerusalem bearing his family’s name. 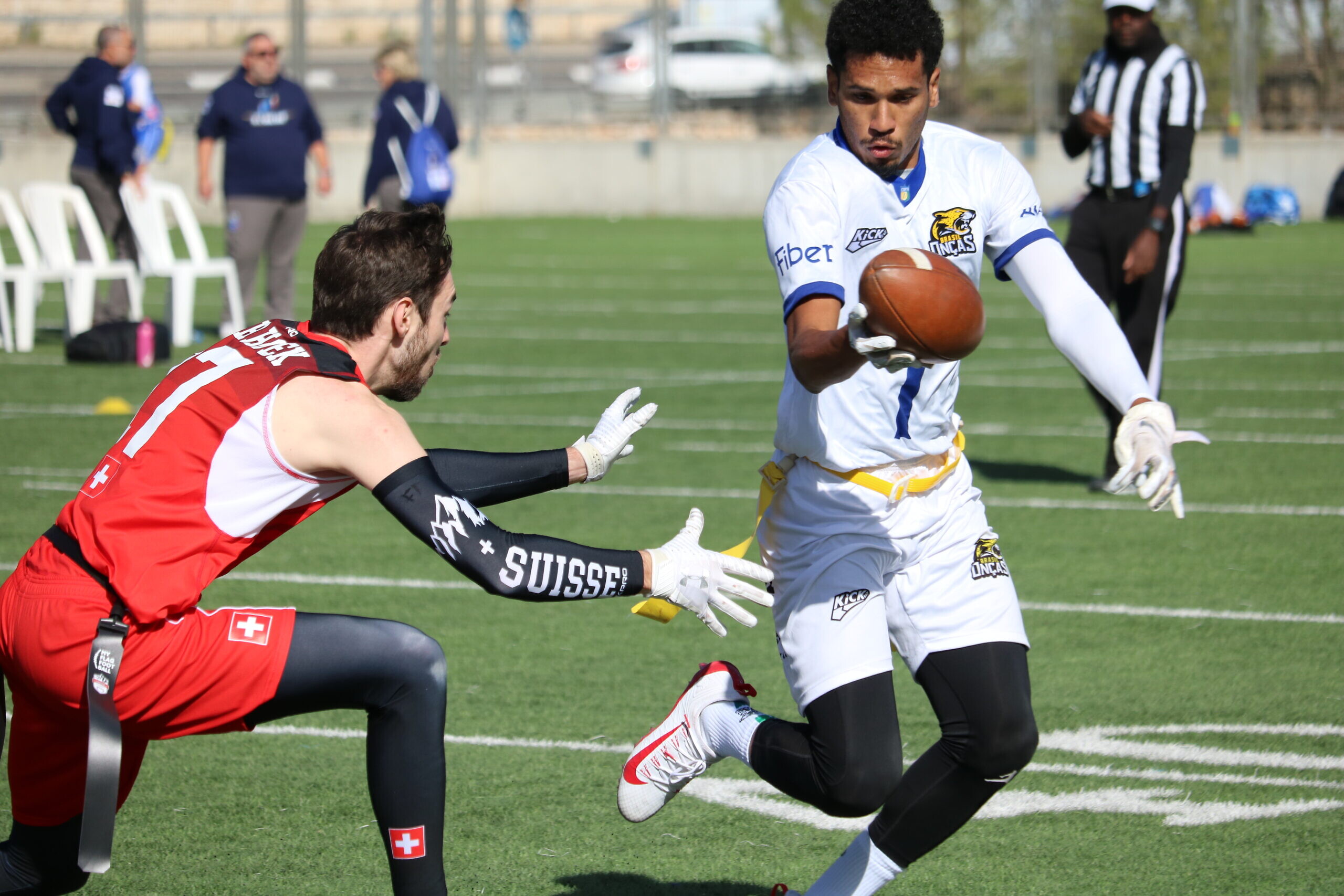 ‘What we pulled off was incredible’

Sheneika Comice, one of the star wide receivers for the champion U.S. national women’s team, spoke to JNS on the first day of the competition and said “Israel is a beautiful country. I love the hospitality, and we are really enjoying the competition. Our goal is to win a ticket home, baby!” referring to her team’s desire to secure a spot at the World Games, which they did, and handily.

Chris Lankford, who has been the U.S. national women’s team head coach for the past three years, told JNS that “it’s been a great tournament with great sportsmanship, and an amazing environment—period.”

Lankford added that while he didn’t get to see as much of the country as he would have liked due to COVID-19 restrictions, “the landscape is beautiful. The air in Jerusalem is so clean; it’s great to be able to see the stars.” He said that he would “definitely” come back to visit Israel again. 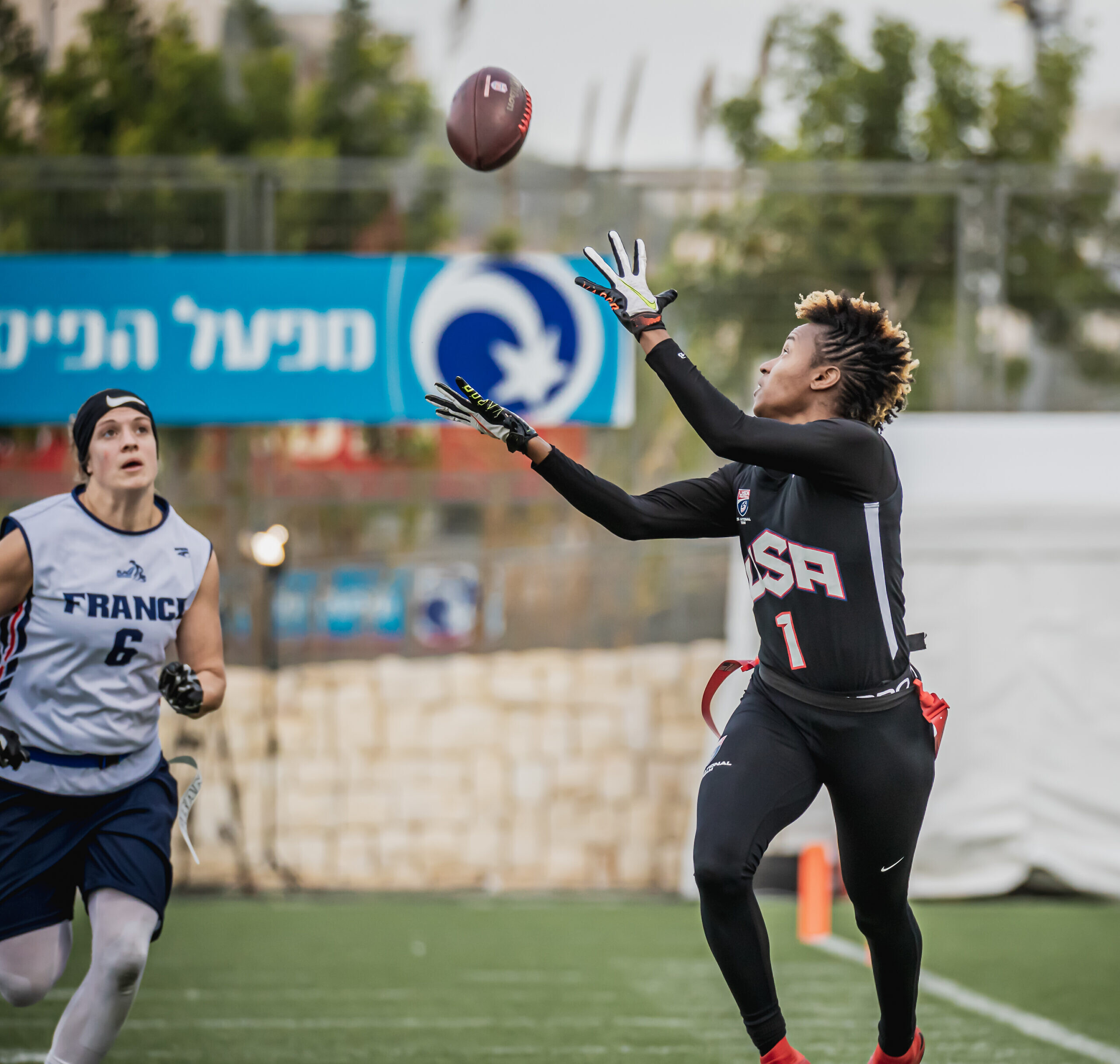 Nausicaa Dell’Orto, the captain of the Italian women’s national team whose team finished in eighth place qualifying for the World Games, told JNS “I’m grateful to be a part of this team. We’re always improving, and we’re going to make it up that ladder.”

Danny Gewirtz, who co-founded the AFI with Leibowitz and serves as its special projects manager, was part of the broadcasting crew calling the games live to tens of thousands of viewers on YouTube.

He discussed Israel’s performance at the tournament telling JNS that men’s team coach “Kenny Zwiebel did a great job with a combination of rookies and veteran players, and had a great first day finishing 3-0, but had two difficult losses on day two preventing them from moving on. It was a valiant effort.”

Gewirtz said “the women’s team was completely overhauled over the past six months, and head coach Elissa Sagoskin did a great job with a group of many new players. They should be proud of themselves for the way they competed in this tournament.”

In regard to the event in general, he pointed out that “what we pulled off was incredible. The AFI staff really joined together to provide a great experience for all these international flag football players.” 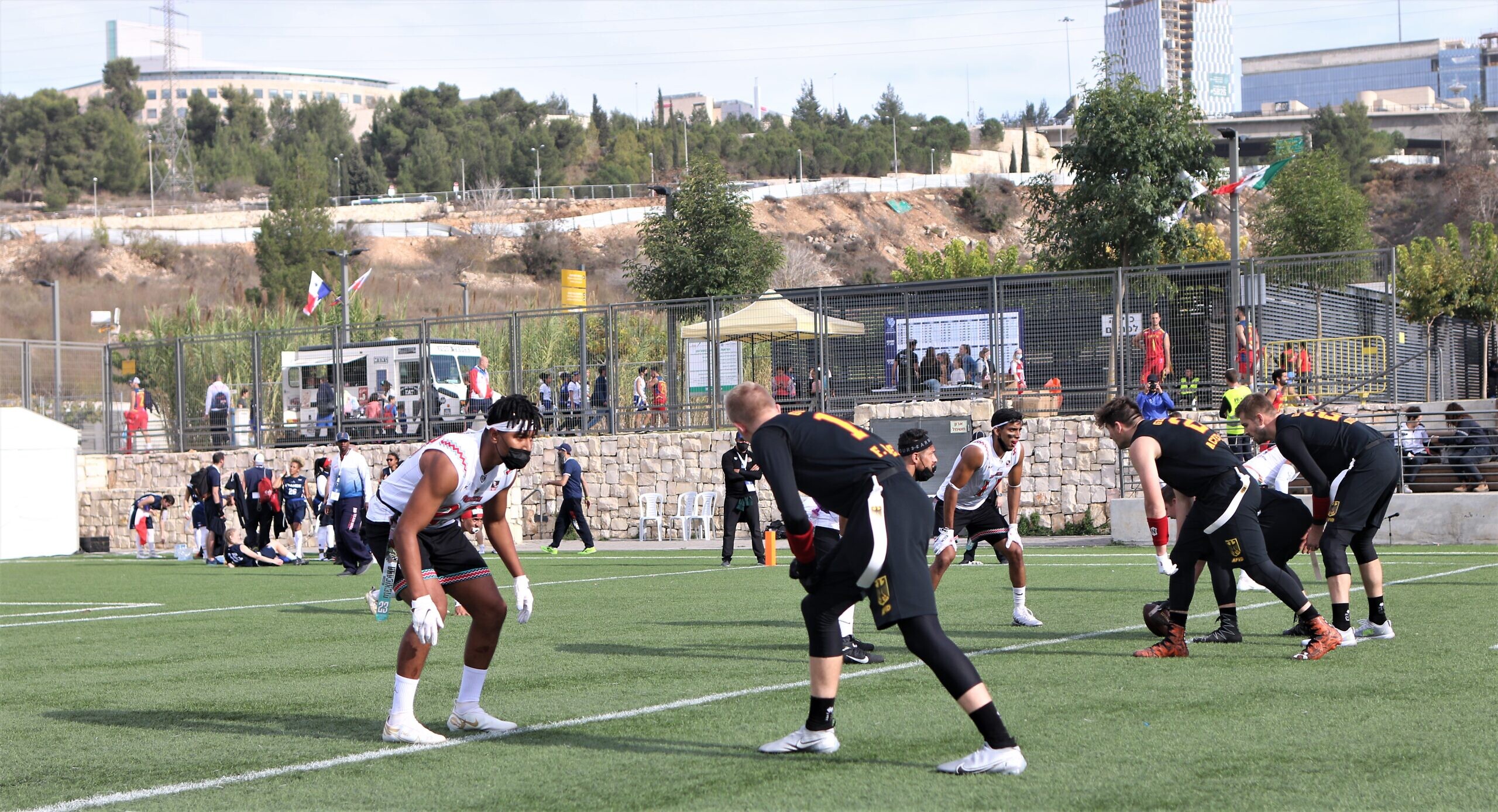 10th Flag Football World Championship in Israel. Photo by Nils Hachmann.
Republish this article in your newspaper or website