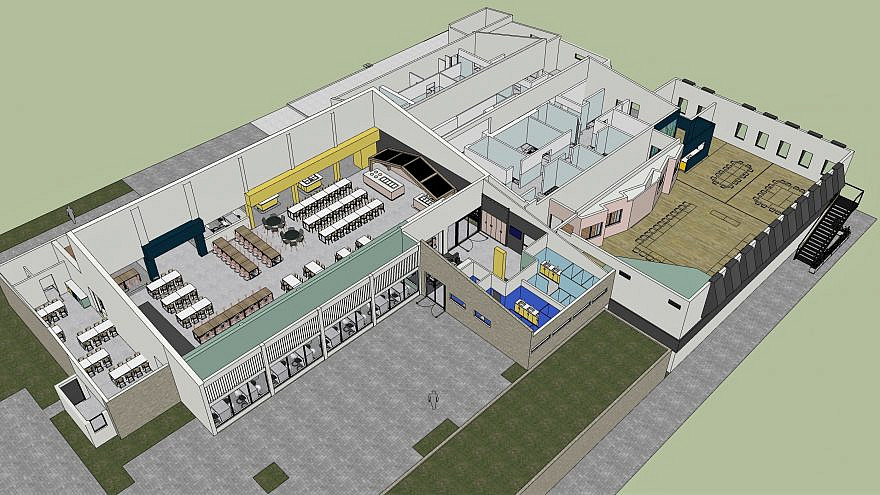 Artist rendering of ORT dining facilities and kitchen complex to be built at the Kfar Silver Youth Village near Ashkelon and the Israeli border with Gaza. Credit: Courtesy.
Spread the word.
Help JNS grow!
Share now:

(January 15, 2021 / JNS) A major renovation project will transform the Kfar Silver Youth Village in Israel after World ORT secured a substantial investment from one of British Jewry’s leading philanthropic foundations.

Near Ashkelon and the border with Gaza in southern Israel, Kfar Silver was bought by World ORT in 2016. It includes a high school, junior high school, boarding school and agricultural farm.

The village is home to about 740 students with one-third living as on-site as boarders. Many of them come from families struggling financially. With a large number of orphans and immigrant children, there are also significant emotional and academic support needs within the village.

Dan Green, World ORT director general and CEO, said: “Kfar Silver is a jewel in the crown of the ORT network. The village has a fascinating history and has the potential to change the lives of its young residents. Signing this multimillion-dollar, four-year renovation plan is the first step in making those changes a reality.”

“We are determined to transform the village into a location in which hundreds of young people who have not had the best start to life can thrive and realize their dreams,” he added.

The project includes significant improvements—as much as $5 million of work—to Kfar Silver’s kitchen and dining-hall complex, as well as the senior high and junior high school buildings.

The senior high school will see wide-scale modernization of its classrooms and offices; the transformation of shared spaces to encourage group study; new Wi-Fi systems; and upgraded plumbing. Improvements will be made to the junior high school’s roofing, corridors and electricity system.

“This investment,” said ORT UK trustee Mark Mishon, “will help to put the future in the hands of a new generation of Israeli children.”