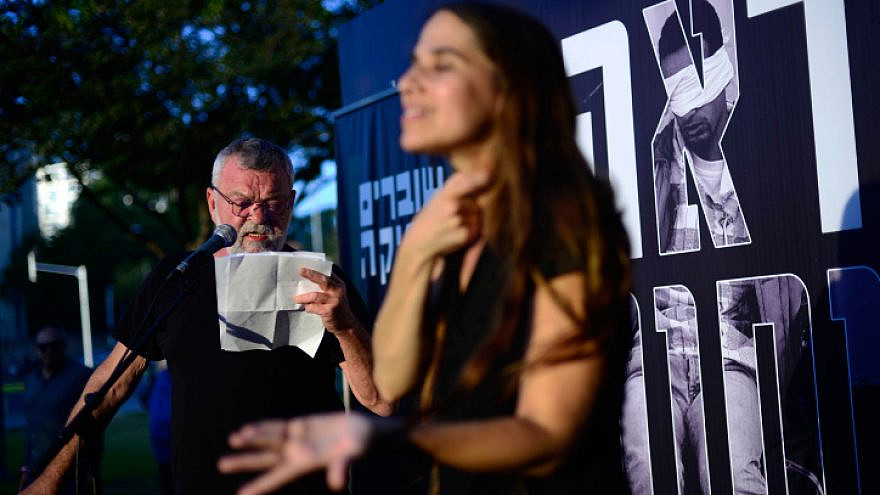 Soldiers' testimonies are read in front of the Kirya military base in central Tel-Aviv, on July 1, 2017. Photo by Tomer Neuberg/Flash90.
Spread the word.
Help JNS grow!
Share now:

After the conclusion of the operation in the Gaza Strip, which came in response to Hamas operatives kidnapping and murdering three Israeli teens, Breaking the Silence distributed a booklet containing 111 anonymous testimonies, supposedly of IDF soldiers. These accounts led to IDF officers and soldiers being investigated for possible war crimes. The allegations were determined to be baseless.

The IDF Military Police investigated whether or not the soldiers in question had acted in accordance with IDF protocols and found them to have been in compliance. However, Breaking the Silence claims that the protocols themselves are problematic and launched an international campaign. The media blitz included interviews and newspaper columns translated into multiple languages, all of which served to solidify the claim that Israel and the IDF had committed war crimes during the 2014 Gaza operation.

The Ad Kan report focuses on a few of the incidents described by Breaking the Silence, and claims that the soldiers’ “testimonies” were presented in a biased manner. Some of the witnesses, when questioned, admitted they had not been present at the incidents they described, according to the report. Even more concerning, several claimed that Breaking the Silence had edited their testimonies, changing what they had said.

For instance, one anonymous testimony, from an Armored Corps soldier, describes how members of a tank crew intentionally and without cause fired at civilians, “Like in a computer game.” The soldier, Yaron Ze’ev, and his comrades were investigated by the Military Police, and explained that Breaking the Silence had “edited” their testimonies.

The NGO also published five different descriptions of another incident in which an elderly Palestinian who appeared suspicious approached a contingent of Nahal Brigade soldiers fighting in Beit Hanoun, and was shot and killed. Breaking the Silence published the testimonies separately, creating the impression that they described five different incidents.

Ad Kan reports that a debriefing of 10 soldiers and officers who had been present showed that they had operated in accordance with regulations, and that the man had continued to approach them despite being told in Arabic to stop and warning shots fired into the air.

“Publishing the testimonies, which are baseless, benefitted the organization [Breaking the Silence] by causing its donations to double as a result of the storm, also baseless, that it created,” according to Ad Kan.

Breaking the Silence said in response: “This is a pack of lies. As former combat soldiers, our criticism has never been toward IDF soldiers but rather toward policy and the decision-makers. We will dismantle the rest of Ad Kan’s false claims in court, like we have done in the other proceedings waged against us.”