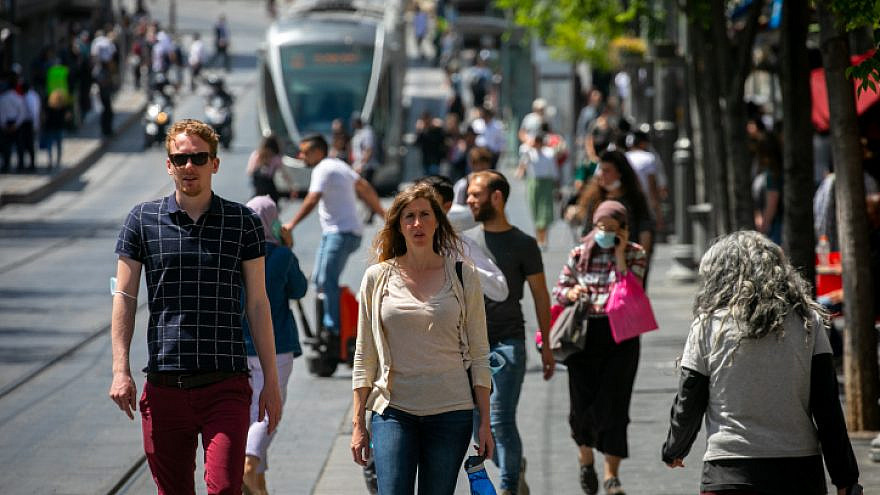 (May 5, 2021 / Israel Hayom) In the runup to Jerusalem Day, which this year falls on May 9, the city continues to be Israel’s largest, with a population nearing 1 million, according to a study by the Jerusalem Institute for Policy Research.

The study was presented to Israeli President Reuven Rivlin by JIPS researchers on Tuesday.

The city’s Jewish population in the capital was statistically older than its Arab one in 2019, with the average Jewish resident being 26 years old compared to 22 for Arab residents.

The city also experienced a negative net migration last year, with 8,200 residents having left the city. Most of those moving to and from Jerusalem were Jews.

By March, the capital had reported 130,200 coronavirus cases, or 139 cases per 1,000 residents, a number much higher than the national average of 91.2, but lower than the average in other cities with large concentrations of ultra-Orthodox residents, like Beit Shemesh (162).

Jerusalem’s economy is the second-largest in Israel, after Tel Aviv, according to the study. Some 344,300 Jerusalemites are employed, which is 9 percent of all those employed in the country. The city’s high-tech industry, in particular, has grown exponentially since 2015. The Hebrew University of Jerusalem had the most Ph.D. students in the country.

“The statistical yearbook contains important information pertaining to all of Jerusalem’s strata, all its neighborhoods. East and west, old and new, religious and secular, Jewish and Arab,” said Rivlin.

“Jerusalem’s future is also the future of the State of Israel. It is here, in the city that comprises the full range of Israel’s demography in all its richness, that we need to find a way to create a dialogue, to connect, to cooperate,” he added.

“The year of COVID-19 and recent events demonstrate just how much Israel’s capital is a multi-faceted and multi-varied city,” said JIPS director-general Lior Schiller.

“Developments and events in Jerusalem have political significance and make an impact throughout the entire country,” said Schiller. “In many respects, the developments and trends in the city are a prelude to what will transpire throughout Israel in the coming decades. In this sense, Jerusalem is Israel’s ‘national laboratory.’ ”