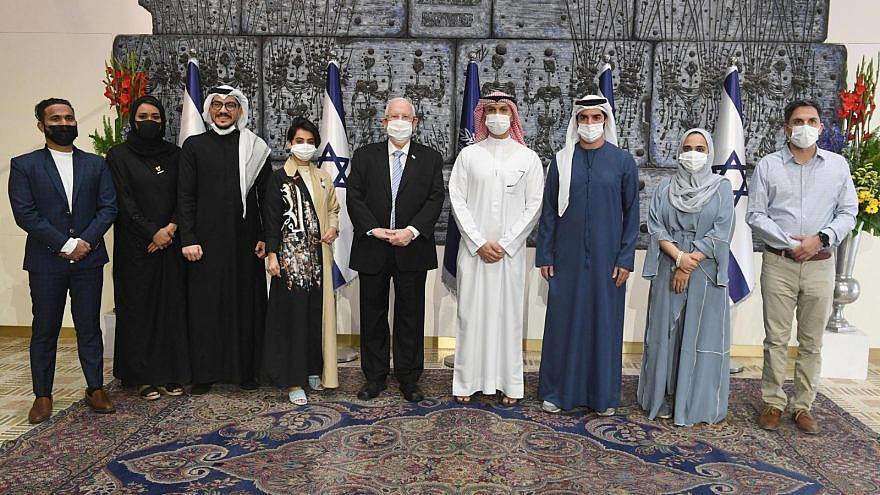 Israeli President Reuven Rivlin welcomes a delegation of leaders from Bahrain and the United Arab Emirates at the President's Residence in Jerusalem on Dec. 14, 2020. Photo by Mark Neyman/GPO.
Spread the word.
Help JNS grow!
Share now:

In a phone conversation with Al Khalifa ahead of Bahrain’s National Day, which falls on Dec. 16, Rivlin said the recent signing of the Abraham Accords was “already a model for other countries in our region,” according to a statement from his office.

“We have chosen to invest from the very beginning in cooperation in the fields of economy, innovation and health,” he said. “I am full of hope that the Palestinians will also take steps to build mutual trust, cooperation and peace.”

Earlier on Monday, Rivlin welcomed a delegation of opinion-leaders and activists from Israel, Bahrain and the United Arab Emirates at the President’s Residence in Jerusalem, greeting them both in Arabic and in Hebrew.

“Peace is made between peoples and nations,” he told the delegation, led by Amit Deri of the Sharaka Project. “Your visit here is another step in the path of building warm relations between our countries.”

The Sharaka (Arabic for “cooperation”) Project “aims to lead social initiatives that bring Israel’s voice to strengthen familiarity with the State of Israel in the Arab world, and create cooperation between young people in Israel and Arab states.”

One member of the delegation, Majid Al Sarrah from the University of Dubai, said “to visit Israel for the first time as part of a delegation is a historic moment. Israel is a prime example of tolerance in the region. This is a new era of peace and stability between peoples.”

Another participant, Mashaal a-Shamri from Bahrain, expressed a similar sentiment, saying “as a Bahraini woman visiting Israel, it is a great honor for me to meet the president. We see Israel as a place of peace, success and coexistence.”