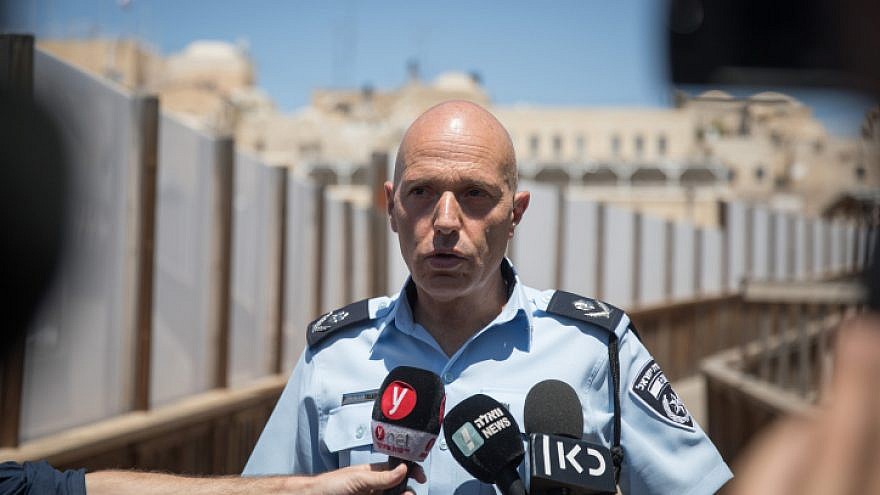 Jerusalem District Police Commander Doron Yedid speaks with media at the Mughrabi Bridge in the Old City of Jerusalem after clashes broke out on the Temple Mount, on Aug. 11, 2019. Photo by Hadas Parush/Flash90.
Republish this article
625 WORDS
Spread the word.
Help JNS grow!
Share now:

(August 12, 2019 / JNS) Voices from across the Arab and Muslim world expressed outrage Sunday in the wake of violent clashes between Muslim worshippers and Israeli security forces on Temple Mount in Jerusalem on Tisha B’Av, which this year fell on the first day of the Muslim holiday of Eid al-Adha.

Iranian Foreign Minister Mohammad Javad Zarif took to Twitter Sunday with a picture of Israeli police pushing back against Muslim women, writing, “The crime shown in this photo was but one perpetrated on Al-Aqsa this morning—on our holy day. The same terrorists are hoping to impose #HumiliationoftheCentury on Palestinians.”

He added that “we Muslims have the power to end this tyranny, but only if we unite.”

A Saudi Foreign Ministry source told the Saudi Press Agency that the kingdom called “on the international community to protect the Palestinian people from various Israeli aggressive practices that provoke the feelings of Muslims and violate the rights of the Palestinian brethren,” according to a report in The Times of Israel.

Rioters threw rocks, chairs and other objects at Jews and police during the unrest.

Israeli police were forced to use riot control tactics Sunday to push back thousands of Muslim worshippers who were on the Temple Mount to celebrate Eid al-Adha, but who became violent as hundreds of Jews assembled below, outside the Western Wall Plaza, waiting for a turn to visit the site in honor of  the Jewish fast day of Tisha B’Av.

Rioters threw rocks, chairs and other objects at Jews and police during the unrest.

Although the Temple Mount was initially closed off to Jews due to the threat of Muslim violence, sparking condemnation from the Israeli right, police ultimately quelled the riots and pushed the crowds back a sufficient distance to enable Jews to safely enter for brief visits.

According to Israel’s peace treaty with Jordan, the Hashemite kingdom serves as custodian of the Temple Mount via the Jordanian Islamic Waqf. The Waqf urged Muslims to converge on the Temple Mount on Sunday morning and to tarry as long as possible to ensure that Jews not be allowed access during their holy day.

Arabic announcements to that effect were broadcast over megaphones and loudspeakers, calling on the Muslims to prevent Jewish entry.

An attempt to escalate the conflict?

“The occupation authorities’ absurd actions and attempts to change the status quo in occupied Jerusalem will only lead to the conflict being exacerbated and the situation blowing up, threatening international peace and security,” he said.

According to Jordanian Foreign Ministry Spokesman Sufian Qudah, Amman had sent a letter of protest to Jerusalem demanding that Israel “respect the sanctity of the mosque and the feelings of the worshippers” at Al-Aqsa.

Palestinian Authority leader Mahmoud Abbas’s spokesman Nabil Abu Rudeineh said on Sunday that “we hold the Israeli government responsible for storming the Al-Aqsa mosque,” calling it “a major provocation.” The P.A., he said, “warn[s] the Israeli government against allowing settlers to carry out these crimes.”

The Palestinian Islamic Jihad terror organization said Israel was trying to “gain control” of the Al-Aqsa mosque and called for retribution against the Jewish state.

“Israel is trying to gain full control over the Al-Aqsa mosque and therefore will bear the consequences” of its actions, the organization said in a statement. “The continuation of the crimes of the occupier in Jerusalem, Gaza and other parts of Palestine necessitates a firm national stance and escalation of the conflict.”