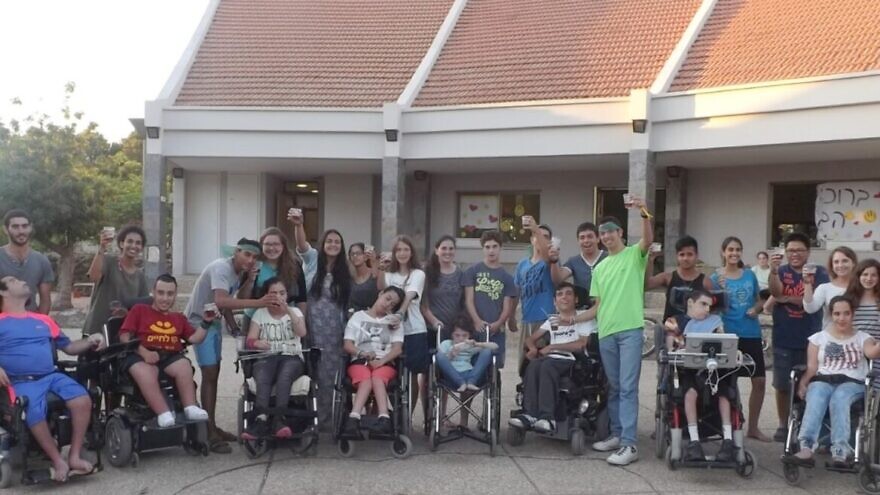 While many people finish the camp experience at the age when Dasha began hers, Camp Eitan is a unique Israeli camp for older teens and adults with cerebral palsy or Down syndrome.

“Most nonprofit organizations limit participation in camps to people under 21. That creates a problem, because when the frameworks end the question marks start,” said Dasha.

“I face difficulties in mobility. I cannot travel to friends unaccompanied, so as I grow older there is more loneliness because beyond the camp I cannot meet friends. There are experiences you want to have with friends and not with parents,” she said.

The “camp” (keitana in Hebrew) is run independently by mostly teenage volunteers from the 140 families of the Golan Heights agricultural village Avnei Eitan. 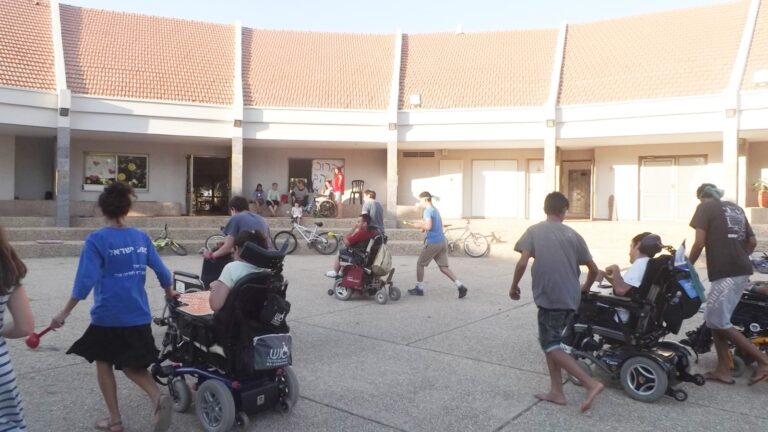 Camp Eitan is an independent camp for teens and adults with disabilities run by the families of Moshav Avnei Eitan in the Golan Heights. Photo courtesy of Tova Hadad.

Local resident Tova Hadad helped spearhead the initiative when she saw that people with disabilities had no other camp options after aging out of the system.

Hadad doesn’t work in the field of disabilities, nor does she have children who fit the camper profile. She has a degree in mechanical engineering from The Technion – Israel Institute of Technology.

Rather, the motivation came “from my heart and my experience as a mother,” she said.

She and her husband Yossi, a tomato farmer, have nine daughters and a foster son. Some 15 years ago, their older daughters volunteered as counselors in a free week-long summer camp for physically disabled children sponsored by ILAN, the Israel Association for Children with Disabilities. Camp ILAN, and others like it, takes place each year in many small Israeli communities.

Hadad was “proud as a peacock,” she said, watching Avnei Eitan teens taking 24-hour responsibility for the 12- to 16-year-old campers entrusted to them.

But she wondered what happened to these kids when they aged out.

“Some can volunteer for the army or national service. Some can find employment and live semi-independently through organizations such as SHEKEL. But many have no place to be,” said Hadad.

“We wanted to enable these children to keep coming when they turned 21.”

And so the village started its own, unaffiliated program, that welcomes campers from northern Israel to come back year after year, with no age cutoff. The oldest camper is now 35.

“Unlike with an organization that sends different kids each year, we have the same people coming all the time and we’ve become very good friends with them,” says Hadad.

“We began with seven and now we have 20, including two from our own community. Sometimes there are campers who don’t feel the need anymore, and that’s good—but most don’t have other options and our camp gives them something to look forward to.”

Hadad started out by raising money for the program and then became its manager.

“Once I started taking care of the finances, I wanted to make sure donations were being used wisely. And now it’s such a huge part of me that I can’t separate from it,” she explained.

“I really want to publicize what we do because I want more programs like this to take care of people over 21. Organizations can do it in cities, too, but in a smaller place it’s easier because everyone knows everyone else.”

“I try to let the youth volunteers take the lead,” said Hadad.

Each camper has two counselors tending to his or her needs day and night. Regarding liability insurance, Hadad said the moshav’s private insurer covers that.

Summer activities include boating on the Kinneret (Sea of Galilee), hiking the accessible path at Tel Dan Nature Reserve, making chocolate at De Karina and visiting the Haifa Zoo. 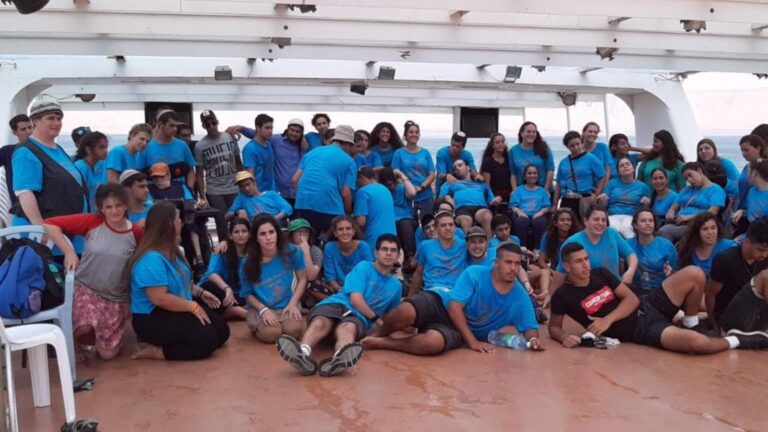 Camp Eitan campers on a boat on the Sea of Galilee. Manager Tova Hadad is on the far left. Photo courtesy of Tova Hadad.

“Our youth make up games and activities, and we invite magicians, comedians and singers to entertain,” said Hadad.

They also invite speakers such as Ariela Savir, a blind composer of children’s songs. They hope to have a visit next session from Dr. Hodaya Oliel, Israel’s first physician with cerebral palsy.

Some volunteers do better with campers who have CP and need physical care, while others are a better fit for physically active Down syndrome kids.

‘You just need a big heart’

“At the beginning, we brought [in] professionals to explain what to do, and then we saw that the youth had very good intuition and don’t really need to be taught. You just need a big heart,” said Hadad.

Younger kids in the village can’t wait to work as camp counselors. “They grew up their whole life knowing about it. Almost everyone does something to contribute, even if it’s baking cakes,” she said.

The camp’s logo was designed by a camper, a 30-year-old graphic designer who executes her designs using her feet and toes.

Eden, a 29-year-old Camp Eitan camper from its first season, said the camp is like her second home.

“It’s fun for me to be in the company of wonderful people who give us their whole soul,” she said.

Rafael, 27, has attended Camp Eitan for about 10 years.

“I just enjoy talking and laughing with my friends and with the camp counselors. There are no other camps like Keitanat Eitan,” he said.

Dasha sums up: “It is a mistake in every way to think that people with disabilities can manage on their own as adults and no longer need these associations. It gives me confidence to know that I can always be a part of this special thing.”

Tova Hadad welcomes inquiries about Camp Eitan and can be contacted at: rdromit1@walla.com.