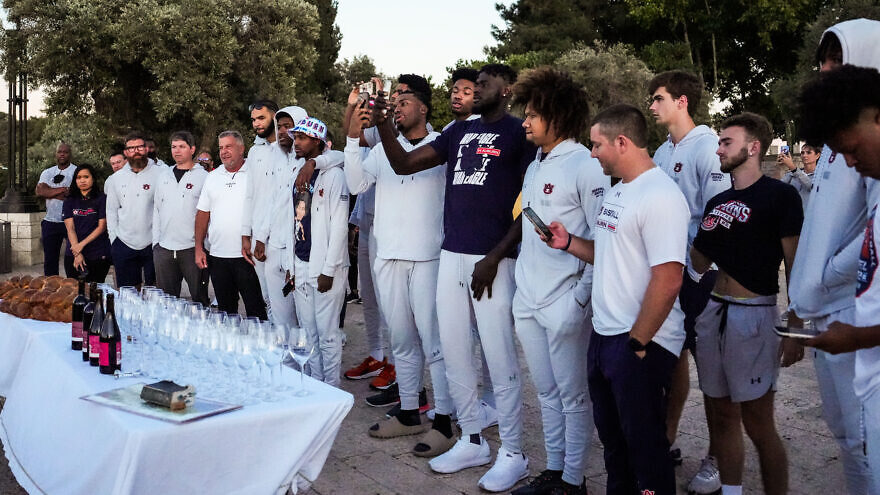 (August 2, 2022 / JNS) Auburn University’s men’s basketball head coach Bruce Pearl is in Israel with his team for the inaugural “Birthright for College Basketball” tour from July 31 to Aug. 10. The reigning SEC regular-season champion Tigers will play three games against Israel’s top teams over the course of the visit.

Auburn is the first Power 5 conference school to make a preseason trip to the Jewish state.

On Monday, Pearl and some of his players, including Lior Berman and Dylan Cardwell, led the Bruce Pearl Youth Clinic at the Jerusalem YMCA along with Tamir Goodman, a former professional basketball player who lives in Israel and was nicknamed “The Jewish [Michael] Jordan” by Sports Illustrated in 1999.

Pearl, who is Jewish, is on his fourth trip to Israel. When asked by JNS how his Judaism and connection to Israel have influenced his coaching, he said, “Growing up in Boston I had the opportunity to see wonderful ethnicity… not always getting along, but each group was unique and full of great tradition. I saw racial violence as a kid and tremendous anti-Semitism; I felt it, except when I was on the playground playing pickup [basketball].

“It was shirts and skins,” he continued, adding, “Can you make a bucket? Can you guard someone? It didn’t matter how you prayed, or what color you were. So my Judaism, in which I’ve tried to bring people together, has been the key to my success on my journey as a coach. We have to know who our opponent is. And together we can do so much more than we can apart.”

All games will be televised live at 1 p.m. (ET)/Noon (CT) on the SEC Network. ESPN college basketball analyst Jay Bilas will call the action alongside play-by-play announcer Roxy Bernstein.

The NCAA allows teams to make an international trip every four years, with the Tigers having previously traveled to Italy in the summer of 2017.

Pearl said that he is confident that after his team’s visit to Israel, more Division I college basketball teams will want to compete in the Jewish state, all the while learning about the country.