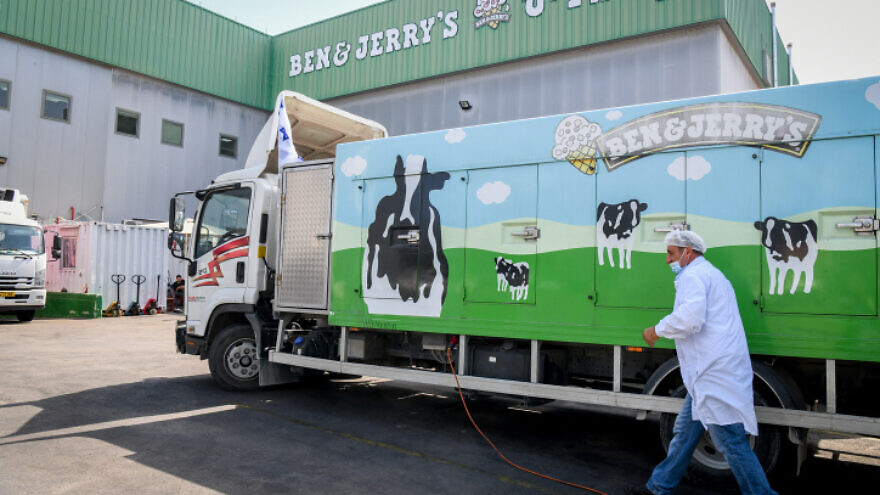 Workers at the Ben and Jerry's factory near Kiryat Malakhi, near the Israeli city of Ashkelon, on July 21, 2021. Photo by Flash90.
Spread the word.
Help JNS grow!
Share now:

(March 15, 2022 / JNS) The manufacturer and distributor of Ben & Jerry’s in Israel are asking for an immediate court-ordered preliminary injunction to prevent the British conglomerate Unilever and its subsidiary, Ben & Jerry’s, from terminating their licensing agreement with the Israeli company until its claims against the companies regarding their boycott of Israel are resolved.

Avi Zinger and his company, American Quality Products Ltd. (AQP), filed a new formal motion with the U.S. District Court of New Jersey. They are asking the court to make sure that Unilever maintains its contract with AQP while the court case involving all parties moves forward. Unilever’s response is due by April 4, and the motion will be considered on April 18, the court said.

Earlier in March, Zinger and AQP sued Ben & Jerry’s and Unilever for unlawfully terminating their 34-year business relationship with AQP in order to boycott those living in the West Bank and eastern Jerusalem, areas the ice-cream-maker called “Occupied Palestinian Territory.”

The lawsuit urged the U.S. District Court of New Jersey to declare Unilever’s termination of their business agreement illegal, which would allow AQP to continue selling Ben & Jerry’s products throughout Israel.

AQP stated in the lawsuit that its sales have declined exponentially since Ben & Jerry’s announced their anti-Israel boycott plans last July.

Competitors are also trying to snatch AQP contractors and employees, and pressure stores to give up freezer space reserved for the Israeli company.

In this new court filing, Zinger argues that Unilever’s unlawful actions, specifically its decision to not renew its license agreement with AQP when it expires in December, is causing AQP “irreparable harm.” AQP says it faces “immediate irreparable injury” and will be put “under imminent threat of … total destruction.”

AQP said it has experienced attacks on its equipment and is unable to plan for the coming season, commit to long-term contracts, hire managerial staff and secure raw materials due to its uncertain future with Unilever and Ben & Jerry’s.

If the court grants AQP’s request to issue an immediate preliminary injunction it would allow the company to continue manufacturing and distributing Ben & Jerry’s ice-cream across Israel. Unilever must respond by March 21; the court is scheduled to hear an oral argument on the motion on April 4.