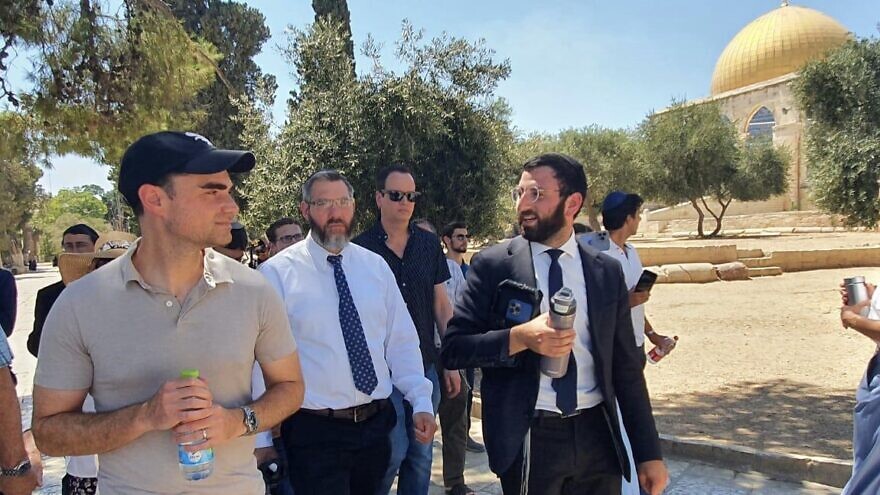 (July 25, 2022 / JNS) On Sunday afternoon, Ben Shapiro, the editor emeritus of The Daily Wire, ascended to the Temple Mount in Jerusalem to pray with his parents and a group of followers.

Shapiro’s first visit to the Temple Mount was during the holiday of Sukkot back in October 2019. That visit was cut short after someone in his group was found to be carrying a willow branch in his pocket as a mitzvah for the last day of Sukkot, leading to the group’s removal from the holy site.

While waiting for security to clear the group to enter the complex this time around, Shapiro told JNS that he hoped to be permitted to complete the tour this time.

“Hopefully, we actually make it all the way around the outside of the compound this time,” he said. “I wish we could all daven (‘pray’) openly there—the freest thing to do. The only place that Israel is an apartheid state is only on Har HaBayit [the Temple Mount]. That’s the only place.”

JNS joined @benshapiro on his tour of the Temple Mount.

While on the complex, Shapiro and his group recited afternoon prayers, and his father said Kaddish for his grandmother, who passed away less than a year ago. During prayers, the group was repeatedly interrupted by Israeli police, who rushed them through their visit.

Shapiro’s group was escorted by five Israeli police officers with one Jordanian Waqf guard watching at a distance.

According to Melissa Jane Kronfeld, founder of High on the Har, a group that prays daily on the Temple Mount, the police presence is typical as protection for groups with religious Jews.

“The Israeli police protects us from Islamic extremists, for which we are grateful,” she said, citing the riots in June as an example.

Rabbi Yehuda Levi, the American director for Yeshivat Har Habayit and co-founder of High on the Har, led both of Shapiro’s tours. He stated that through the efforts of his groups and others, Jewish worshippers have pushed the status quo enough to pray with a minyan without being arrested, as they claim would have happened in the past. While prayer typically does not result in arrest anymore, non-Muslim worshippers must pray discretely and are forbidden from prostration.

​​”The first time Ben came to the Temple Mount, the situation was much more difficult, as the police were much stricter and on the lookout for religious infractions,” said Levi. “We barely were able to mumble the Mussaf prayer and had to pretend that we were having a conversation with one another because if they suspected that we were praying, they would have been all over us.” 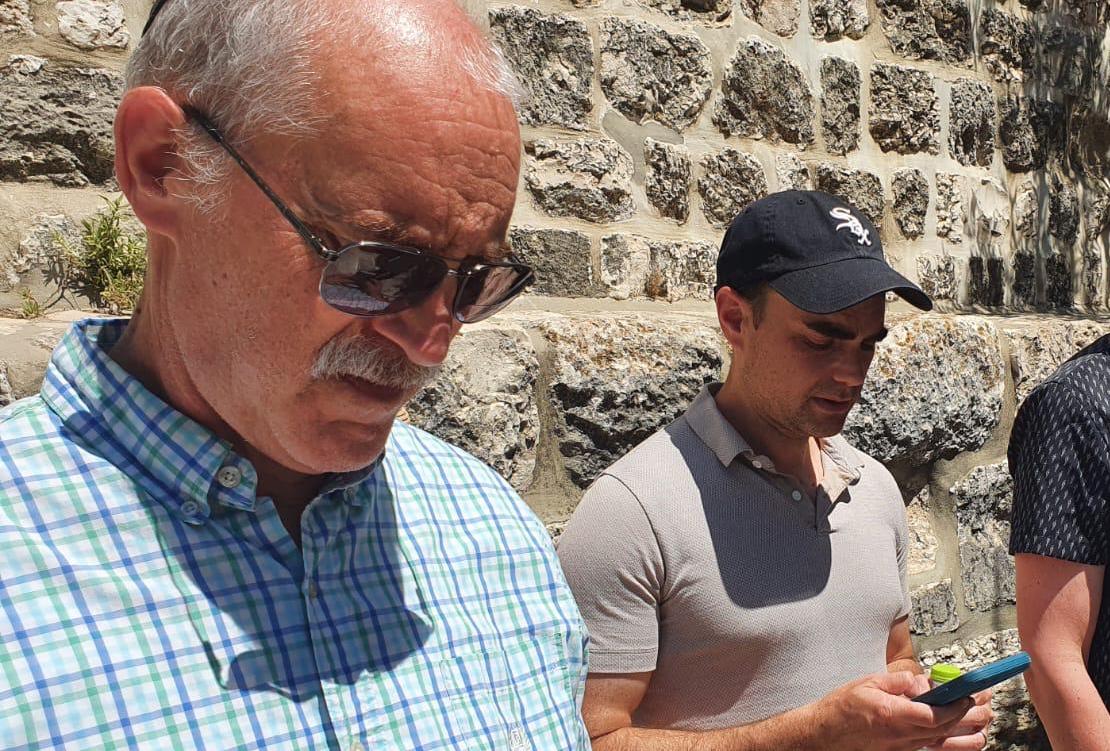 Levi says through his organization and others that go up to the mount daily to pray, “the Israeli government has been forced to confront the fact that Jews want to view and treat the Temple Mount as a Jewish holy site.”

Many Orthodox Jews do not visit the Temple Mount because they want to avoid walking where the Temple once stood and are uncertain of the precise location. Levi’s group instead relies on the tradition that the Temple was located at the location of the Dome of the Rock and therefore takes a route that avoids the elevated platform where the golden dome building sits.

“When Ben returned this time, he was able to see the major difference in the attitude of the police and our abilities to serve God in our holiest of sites,” said Levi.

After his tour, Shapiro told JNS that he did not feel “completely safe” there.

“Certainly, the people who are up there who have been given control by the Israeli government don’t want anyone to feel safe up there,” he said. “That’s the entire point.”

‘A platform to bring visitors’

The Temple Mount is under the administration of the Jordanian Waqf, with security provided by Israel. Most Muslims are permitted to enter the Temple Mount from eight of the nine gates without restriction. Depending on the security situation and holidays, non-Muslims are only allowed to enter Sunday to Thursday from 7 a.m. to 11 a.m and 1:30 p.m. to 2:30 p.m. after going through security and metal detectors at the Mughrabi Gate, a wooden bridge connecting the Western Wall Plaza to the mount.

Non-Muslims are forbidden from bringing religious books or symbols with them and from prostrating at the risk of arrest. Groups of religious Jews are also prohibited from entering the Temple Mount without a security escort and must remain on a route permitted by police.

“Up until a few months ago, non-Muslims were not allowed to drink water from the water fountain and sinks,” said Levi. According to Levi, this changed after several activists continued to purposely get arrested for drinking the water to highlight their opposition to the restriction.

Levi said he formed High on the Har with Kronfeld to “have a platform to bring visitors to the Temple Mount in a non-threatening way, where each visitor can appreciate why God has chosen this site as his dwelling place for all time.”

“While we are far from perfect, and there is so much farther to get to until we can fully function as Jews on the Temple Mount, we can appreciate how far we have come due to our dedication to this holiest of sites,” said Levi.

Shapiro praised the groups, calling it “unbelieveable” that the groups have “been able to do so much hard work over here and make sure people can even daven a little bit.”

“Thanks to these guys for doing all of the hard work day by day to expand the access to people who have an original claim to the site,” he added.

Kronfeld said that bringing Shapiro to the Temple Mount was important because it brings necessary attention to what she called the “most important civil-right issue facing the Jews.”

“Fighting for equal rights and access for Jews on Har HaBayit is the most fundamental movement for the Jewish people today,” she said. “Ben’s homecoming is a reminder that all Jews should be able to access the spiritual power that comes with going to Har HaBayit if they choose.”