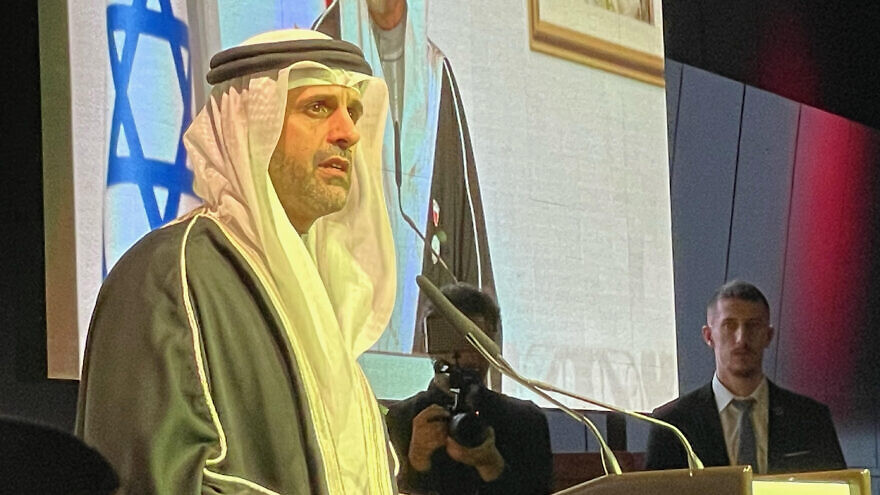 (December 15, 2022 / JNS) The deepening peace and collaboration between Israel and its new Arab allies as a result of the Arbaham Accords was evident on Thursday in Tel Aviv, at an event hosted by Bahrain’s embassy in Israel at the Hilton Grand Ballroom to celebrate Bahrain National Day. While Bahrain declared independence on Aug. 15, 1971, every Dec. 16 and 17 the Kingdom of Bahrain recognizes the coronation of its first emir, Isa Bin Salman Al Khalifa, as the date of its true birth as a modern nation-state.

Khaled Yousif Al-Jalahma, Bahrain’s ambassador to Israel, said at the event, “Today we are at a more advanced stage of relations between our two nations. There is enhanced medical cooperation. Economic trade between our two countries has started to blossom.”

Al-Jalahma continued, “We have a responsibility to tell our part of the world of the challenges you face in Israel, a platform to project to the world what these relations can do for the region. A goal to… create an everlasting peace.”

“The Palestinian cause remains a priority for our country… and for the Arab world,” Al-Jalahma added. “Solving this crisis will bring a sustainable peace. I urge that these new relations be seen as a new beacon of hope for all.”

Israeli Regional Cooperation Minister Issawi Frej said at the event, “Relations with Bahrain are at the center of Israeli consensus. Both our states and nations share a vision of a prosperous future and to improve security which is vital for both our nations and the region.”

Frej emphasized his hope that other states would follow Bahrain’s lead in joining the Abraham Accords, saying, “We want every citizen in Bahrain and Israel to enjoy the fruits of our peace. We are confident this… will attract additional countries in the region. We call on other states in the region to join.”

He also expressed hope for an end to the Israeli-Palestinian conflict. “We must not forget our neighbors, the Palestinians. Those who share the same piece of land. The better their lives are, the better our lives will be. We must help them to harness for their own good, the blessings afforded them in the region,” Frej said.

Regarding the progress in Bahraini-Israeli relations, he said, “Over the past year there have been a large number of government officials of both sides in addition to food, health, cyber security, agriculture and business. More than 40 agreements and memorandums of understanding have been signed between the governments of our two countries… relations between Israel and Bahrain have turned into those of trust and respect.”