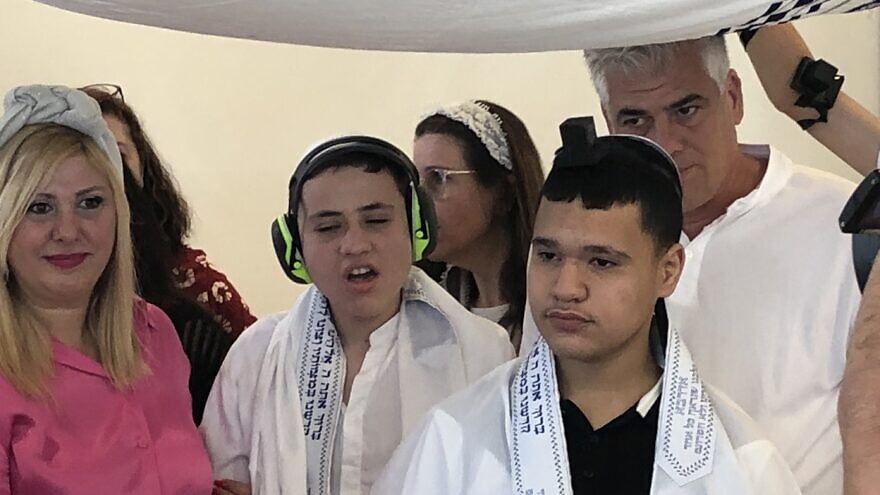 (June 21, 2022 / JNS) Two 13-year-olds with autism—surrounded by family, teachers, guests and Rabbi Mikie Goldstein—celebrated their b’nai mitzvah during a special Thursday-morning musical Shacharit service at the Adat Shalom–Emanuel in Rehovot, Israel. Aviv and Yair put on tefillin, carried the Torah scroll, and recited the Torah blessings and prayers with the help of an augmented communication device. The bar mitzvah took place on May 26 as part of the Masorti (Conservative) Movement’s Adraba center, which has been developing and conducting bar and bat mitzvah programs for children with disabilities for more than 25 years now. To date, more than 5,000 children have taken part in the program.

It continues to be a busy season for participants in the program. From Akko to Haifa, Karmiel, Kfar Vradim and the egalitarian area of the Western Wall in Jerusalem, 100-plus teens with disabilities from families of all backgrounds and levels of observance will celebrate b’nai mitzvah at 20 venues between March 24 and the end of June.

According to Ronen Bar-Abraham, director of Adraba-The Shirley Lowy Center for Children With Disabilities, the bar and bat mitzvah program was founded “to fulfill an unmet need in Israel.” Bar-Abraham is proud of the program and its commitment to serve the needs of all Israelis. “The Masorti movement believes that every Jew with disabilities or challenges is a full and equal member of Klal Yisrael and should be included in a minyan as is every Jew.” 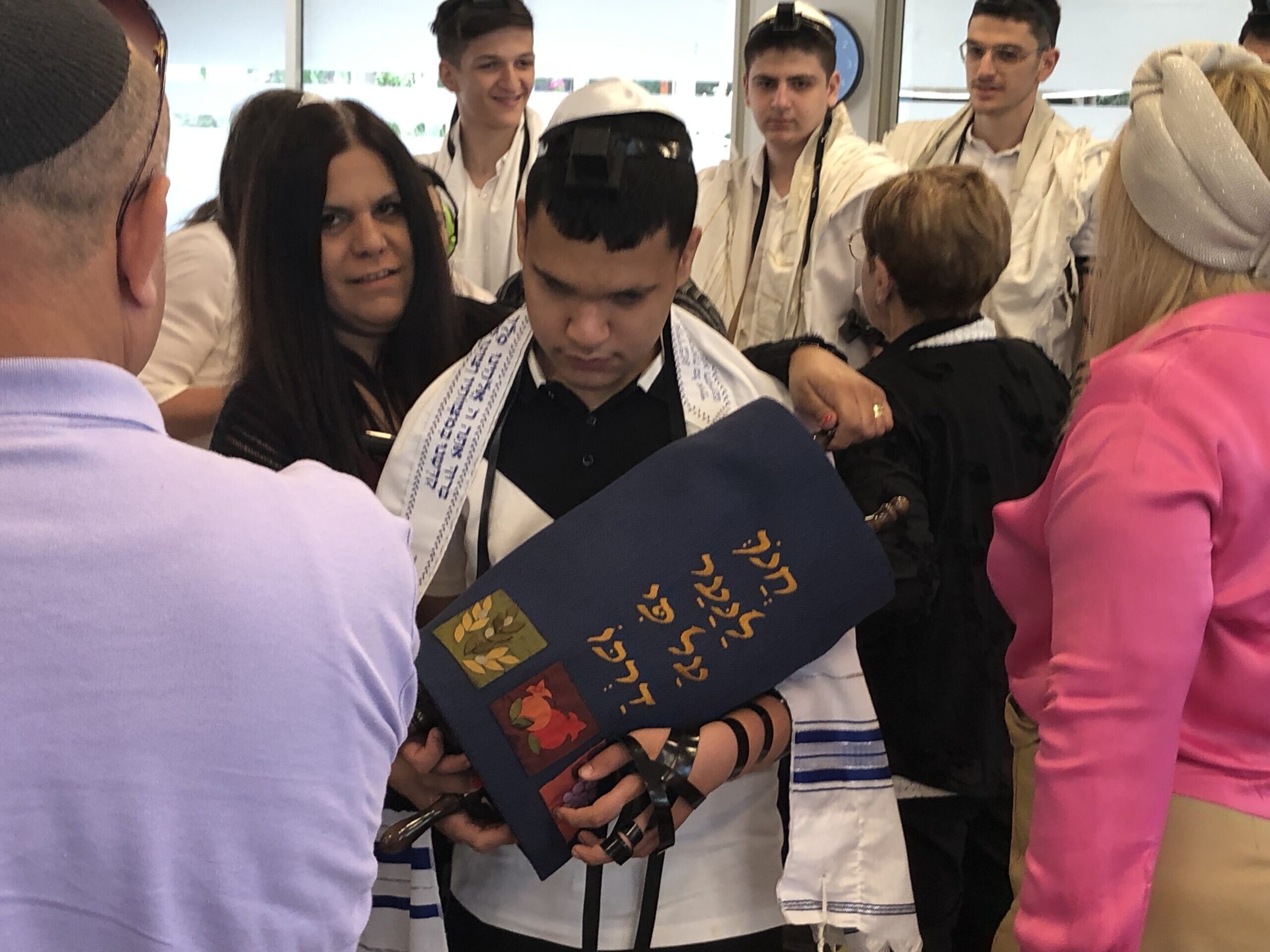 Aviv carries the Torah at his bar mitzvah in Rehovot, Israel, on May 26, 2022. Photo by Howard Blas.

Goldstein, the English-born rabbi who moved to Israel in 1989 and has been leading Adat Shalom-Emanuel since 2014, appreciates the unique nature of the program. “It is a rare chance for these children and families to celebrate a Jewish life-cycle event they might not otherwise have thought possible,” he said.

He appreciates that the students come from “all sorts of religious and non-religious backgrounds—from Orthodox to completely secular to celebrate together” and believes “the program shows that pluralism can exist.”

‘It is inspiring every time’

The special day started with Bar-Abraham welcoming the 40 family members, teachers and guests and putting them at ease. “Shalom and mazal tov to all who enter! You can sit where you want—men and women together.” He also reminded excited guests to hold off on showering the b’nai mitzvah with candy until they finish leading the service and reading from the Torah.

Adraba staff shared a PowerPoint and video of the program, which described the curriculum and preparation process for the more than 200 students enrolled in 30 Israeli schools.

Ruth Rubin Lavie, who came on aliyah in 1978, began playing “Hinei Mah Tov” on her guitar. She is a congregant, b’nai mitzvah teacher and singer who regularly volunteers her musical talents by accompanying on guitar at the services. “It is inspiring every time to see the happiness of kids coming to the Torah and of parents’ kvelling,” she said.

Guests used the red, hardcover B’chol D’rachecha accessible siddur, for which the Adraba Center and the Masorti Movement have received awards from the Shalem Foundation (2010) and JDC-Ashalim. The siddur utilizes simple explanations, various colors and fonts, and picture icons that assist those unable to read standard Hebrew. 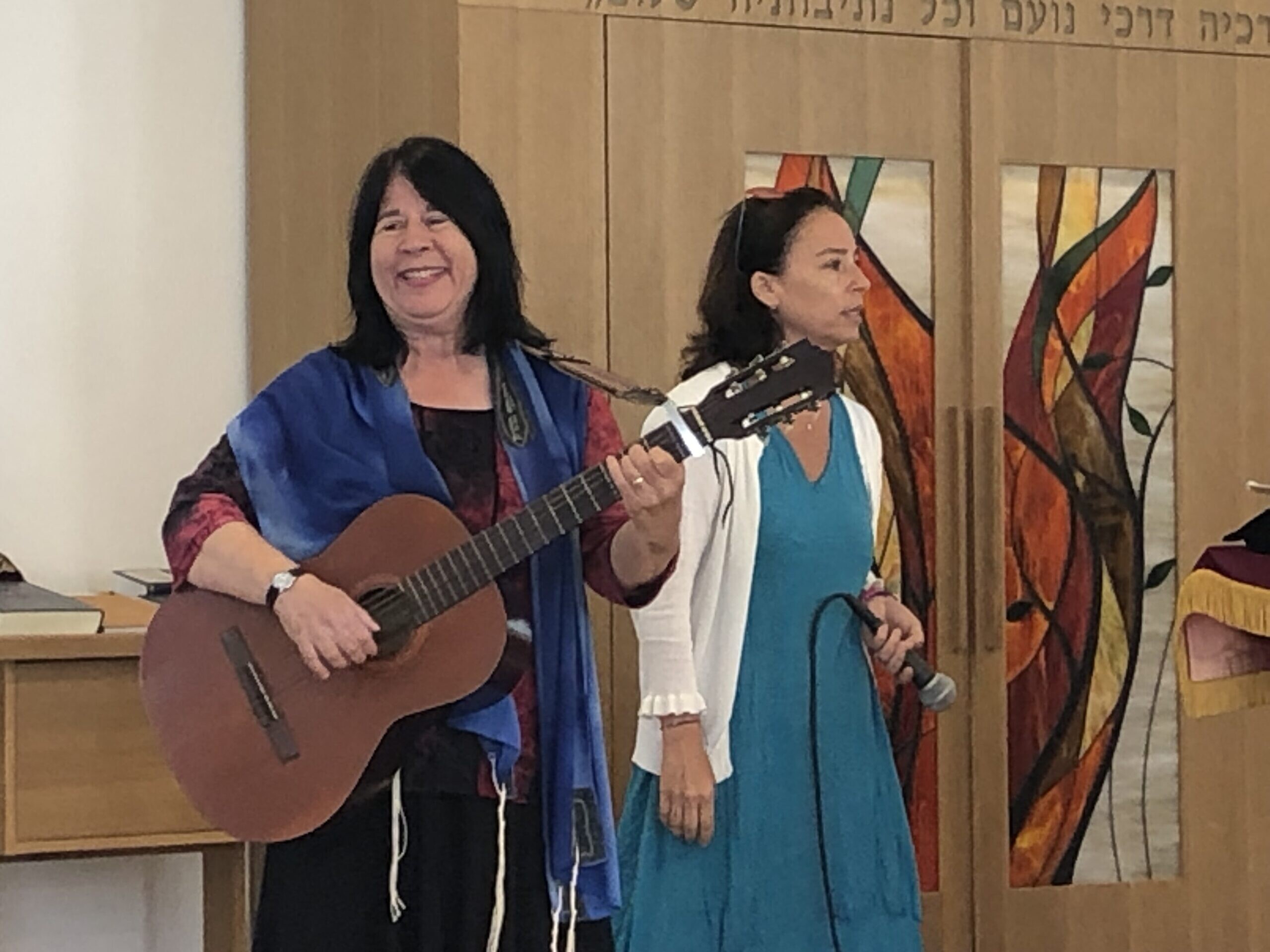 Ruth Rubin Lavie played “Hinei Mah Tov” at the ceremony on May 26, 2022. Photo by Howard Blas.

Throughout the entire service, Aviv and Yair’s teachers patiently stood next to them with smiles on their faces. The teachers helped their students remain on task and facilitated student reading and singing with their augmented communication devices.

The service kicked off with the young men offering personal blessings. “Thank you, God, for giving me the ability to smile and be with my family.”

Goldstein and the teachers consistently modeled sensitivity, respect and inclusivity for all participants and guests. Prior to the central Amidah prayer, Goldstein asked: “Those who are able, please stand.” When the b’nai mitzvah boys had difficulties remaining at the bimah, a staff member seamlessly walked with them around the room until they were ready to return to the service.

Each boy was called to the Torah by name to recite the Torah blessings. Goldstein served as the Torah reader. Yair’s mother, Iris Elkobi, addressed her son, saying “despite the challenges, you are a leader in all areas. … Your dream is to be a millionaire—always listen to your dreams!”

Iris added, “This program is so special. It is a big mitzvah. The bar mitzvah is important for him and for the family, too.”

His father, Chaim, is proud of all five of his sons, but noted that this bar mitzvah was particularly miragesh, “emotional” in Hebrew. He elaborated, “It was so special seeing Yair in his tefillin. Today is a d’var kadosh—‘a holy event.’ ” 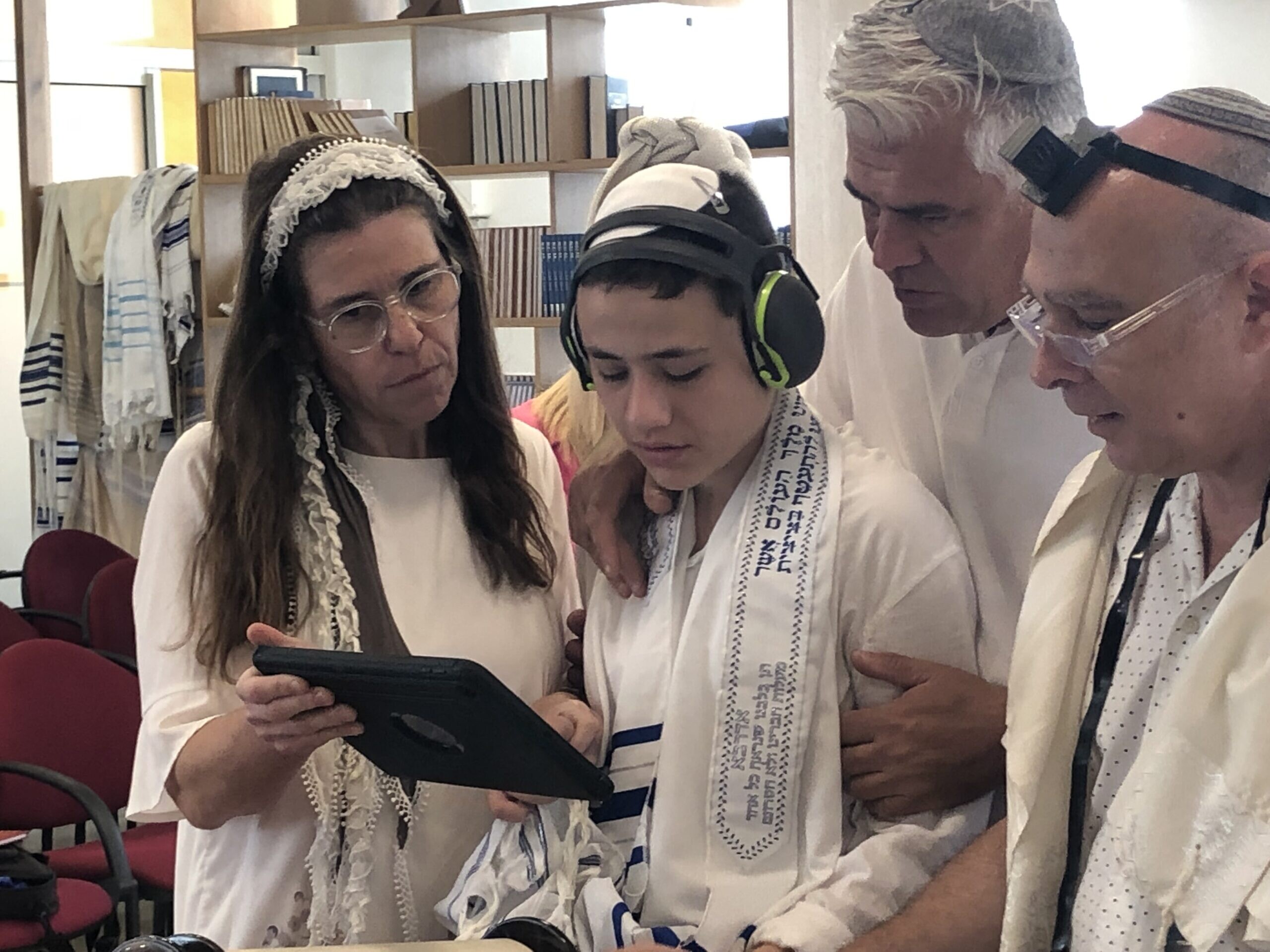 Yair reads Hebrew at his bar mitzvah in Rehovot, Israel, on May 26, 2022. Photo by Howard Blas.

Yair’s school bus driver, Aron, grew emotional when he described the significance of the bar mitzvah. “This program is more important than tanks and missiles,” he said, acknowledging the amount of money Israel spends on defense while also emphasizing the need for ongoing funding to support the b’nai mitzvah program.

At the end of the service, Yair and Aviv received their own personalized copy of the siddur, as well as personalized blessings from parents and teachers. The ceremony took place under a large tallit. The young men were then showered with candy, lovingly tossed by kvelling guests.

The celebration continued with a festive breakfast of bread, salads, cakes and pastries outside in the synagogue’s specially decorated garden.

As the guests said their final “Mazal Tovs,” Adir and Yair left to return to school. The Adraba staff now turned their attention to the 20 students looking forward to celebrating their same milestone before the school year ends. In a few months, it will be time to begin preparing even more Israelis with disabilities for their special days. 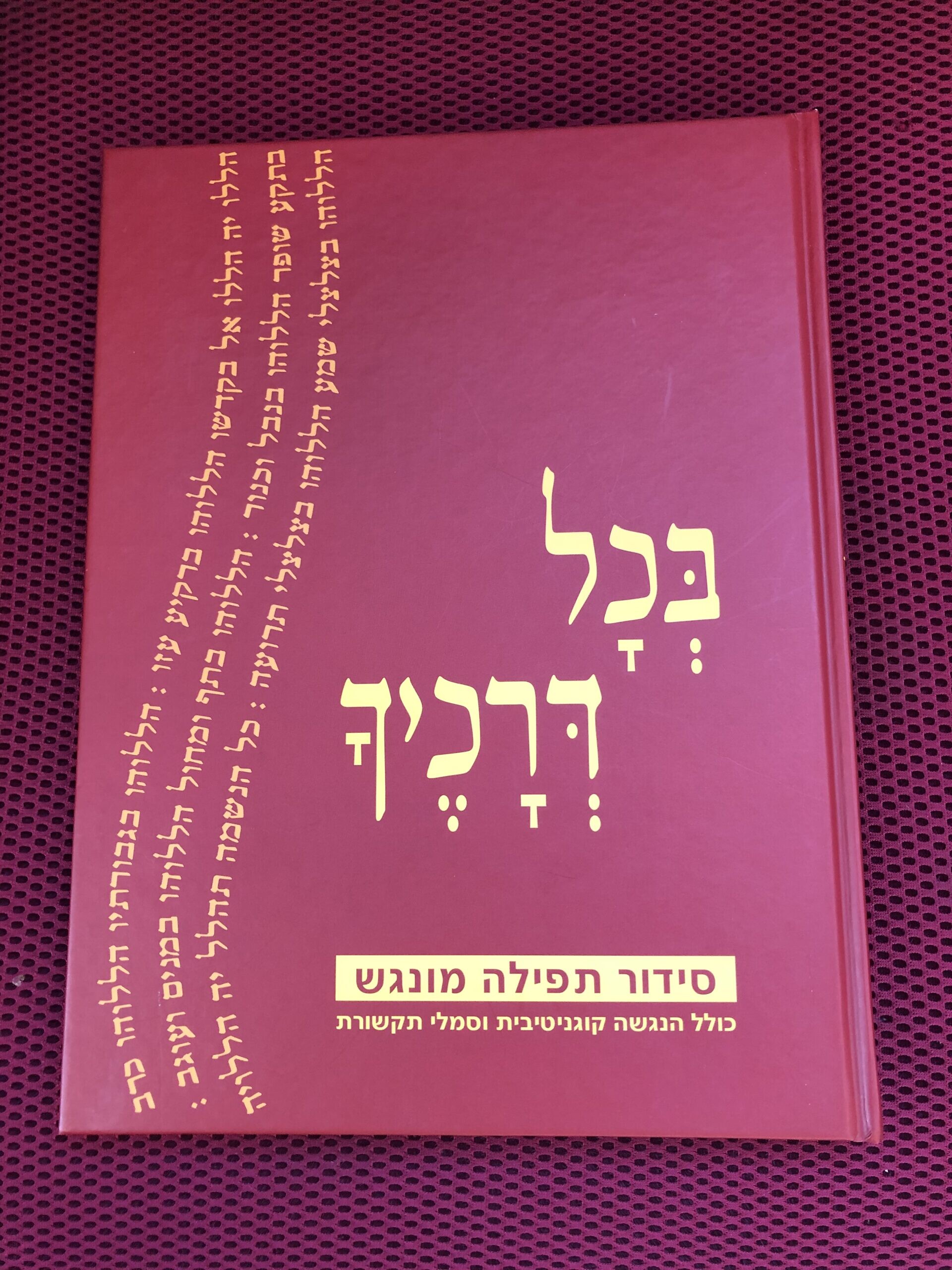 The red, hardcover accessible siddur, used by the boys at the ceremony in Rehovot, Israel. Photo by Howard Blas. 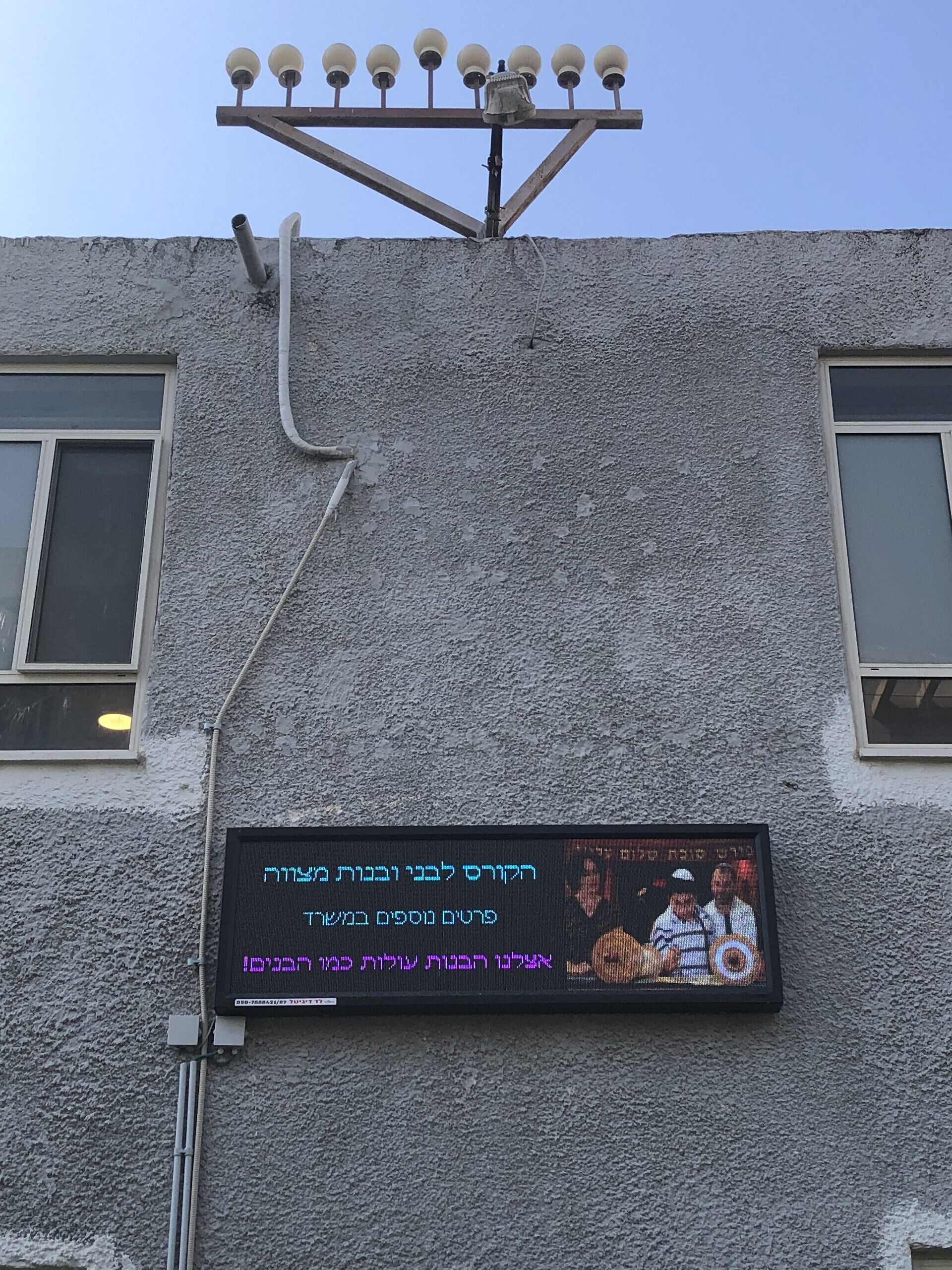 The bar mitzvah venue, Adat Shalom–Emanuel in Rehovot, Israel, on May 26, 2022. Photo by Howard Blas.
Republish this article in your newspaper or website