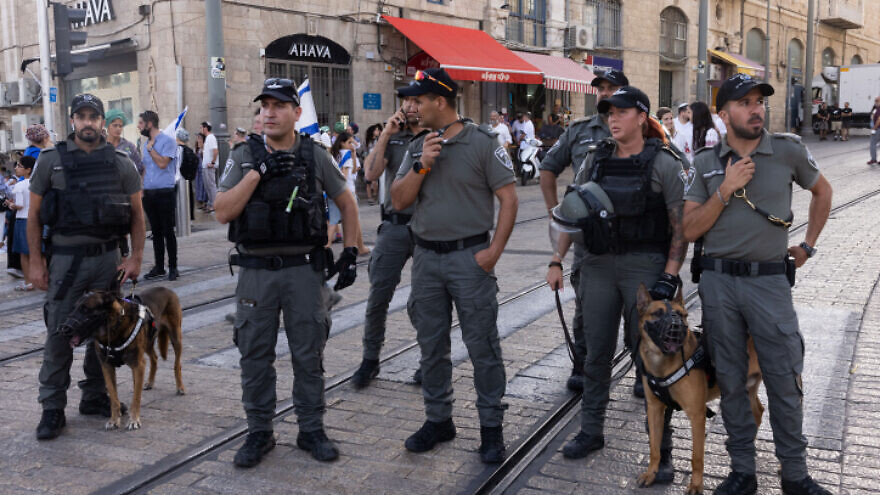 (March 30, 2022 / JNS) The recent string of deadly terrorist attacks on Israeli civilians has once again brought into focus the Israel Police’s large number of missions and how these can stretch it to the limit.

It was police officers who heroically entered into gun battles with heavily armed terrorists in Hadera and Bnei Brak in recent days, disrupting the attacks and preventing even larger tragedies.

1st. Sgt. Amir Khoury was gunned down by a Palestinian terrorist on a shooting rampage in Bnei Brak on Tuesday before Khoury’s partner shot the terrorist dead. The officers rushed to the scene on motorbike, and the Israel Police released dramatic footage of their drive and subsequent firefight.

It is obvious that the more police are on the streets, the better the reaction time is to deadly terrorists.

To put things in broader perspective, the Shin Bet domestic intelligence agency foils, on average, between 500 to 600 terror plots per year, including hundreds of shooting attacks, saving many lives and preventing mass carnage on Israel’s streets.

This represents a level of preemption that has no equivalent in any Western state. The Shin Bet’s intelligence tips send the Israel Defense Forces or Israel Police on many counter-terrorism raids that save lives all year long.

Still, the Shin Bet’s net—as extensive as it is—is not an insurance policy. ISIS jihadists got through it in the past week, and now a Palestinian gunman did as well. The Shin Bet will look for lessons learned and for new ways of maximizing its intelligence coverage.

After the preemption stage comes the response stage. When tensions are up and a spate of attacks occurs, the Israel Police enters its highest level of alert and floods the streets with personnel.

This means, however, that it has fewer resources to tackle routine “classic” policing missions, which do not magically disappear.

It is for this reason that rapidly building an Israeli version of a national guard and deploying it to city centers to and the security-fence region, where Palestinians illegally infiltrate, would go a long way to creating a national domestic emergency-response force without forcing the police to give up on other important missions.

‘A military force with law-enforcement powers’

Maj. Gen. Alon Levavi, a senior research fellow at the MirYam Institute and a former Israel Police Deputy Commissioner, recently explained in a paper why the Israel Border Police could make good candidates for becoming the Israeli National Guard.

Levavi examined the possibility of assigning the role of being uniquely responsible for domestic emergency responses to the versatile Border Police force, thereby freeing up the Israel Police for its classic missions.

“This would follow the model of the National Guard in the United States or the Gendarmerie in Italy—a military force with law-enforcement powers,” he wrote.

Already, the Border Police is at the forefront of domestic security missions. While the regular blue police also play a role, each police district has Border Police companies operating with it, and these units have a semi-military orientation, explained Levavi.

The green Border Police include both conscripts and career officers, and are subject to the commands of police district chiefs under whom they operate. When active in the West Bank, Border Police units operate under the Central Command of the Israel Defense Forces.

Currently, the Border Police can receive specialized missions, such as controlling riots or tracking down Palestinians who have entered the country illegally. They can go from one district to another, “and this is, in fact, what they are forced to do because the police force suffers from chronic personnel shortages. When police send thousands of reinforcements to the Jerusalem District, the Tel Aviv District is left exposed,” said Levavi.

Aside from such specialized missions, the Border Police could also take on the position of being the national guard for times like this, particularly if its numbers grow.

“When intelligence is lacking, readiness, alertness and rapid response abilities are what is left to deal with terrorists,” noted Levavi.

The Israeli police have officially been responsible for domestic security and counterterrorism since 1974, in addition to classic policing missions that range from crime-fighting to traffic enforcement.

No other police forces in the world deal with this amount of security missions alongside classic civilian policing missions, according to Levavi. “This demands resources and attention that takes away from other sectors, such as personnel availability and training.”

Following the traumatic events of “Operation Guardian of the Walls” last May, when widespread Arab-Israeli disturbances, riots and other violent incidents swept the country, a number of former defense officials called for the setting up of a national guard.

In any future war, police would also have to respond to projectile attacks that fall on the Israeli home front, further increasing the strain.

When police saturate known hot spots, as they did last year during flare-ups in Jerusalem, those forces “are not available for crime-fighting and other missions elsewhere,” cautioned Levavi.

On Wednesday, the IDF announced that it is sending 15 special force companies to assist policing missions in the cities and to take part in patrols along the security barrier. But police sources told Ynet that they have tired of hearing of “temporary solutions” and called for an additional 5,000 extra officers to address gaps.

The sources noted that “gaps that have existed in the police for years, but during ‘Operation Guardian of the Walls,’ they became prominent due to the police’s inability to deal with all of the incidents alongside continuing routine activities.”

Ely Karmon, a senior research scholar at the International Institute for Counter-Terrorism (ICT) in Herzliya, told JNS on Wednesday that Israel should also re-establish a civilian guard, which was first set up in 1974, and at its peak numbered 130,000 volunteers.

“Police itself needs more personnel, similar to those of large European countries, and perhaps more technological tools,” he said.

Meanwhile, Israeli Prime Minister Naftali Bennett released a video statement on Wednesday addressing Israeli citizens, in which he announced the formation of a new “Border Police Brigade” in the wake of the attacks. There were no immediate further details regarding the size, structure or missions of the brigade.