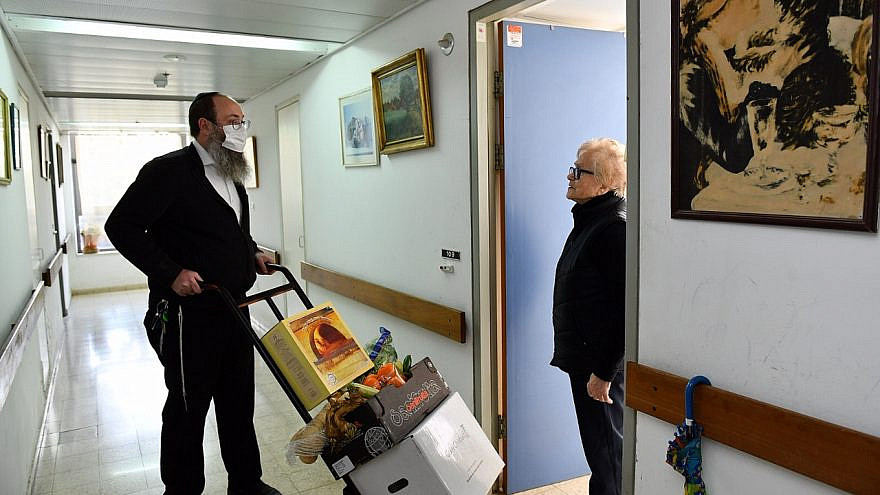 Each year, comforted by the ancient words of the Haggadah and the fragrances of brisket, potato kugel and matzah-ball soup wafting in from the kitchen, at least on seder night, Jews everywhere can enjoy the overwhelming sense that all is right with the world.

But what if we really meant it: “All who are hungry come and eat. All who are needy come and celebrate Passover”?

This year in Israel, that’s a taller order than usual. Consider the nearly 200,000 families who can’t pay their rent and utilities, and still have enough money left for food. This segment of the Israeli population has ballooned in the year of COVID-19 and in the wake of mass job losses. Just compare the Central Bureau of Statistics’ January unemployment rate of 13.9 percent to the 3.9 percent a year earlier.

Add in the extra costs of the Passover holiday (the holiday begins on Saturday night, March 27) and the pressure mounts.

But what can be done to help, outside of shlepping a soup pot from home to home of every hungry Israeli?

It turns out that this is pretty much what the folks at Colel Chabad are doing—and increasingly with Israel’s government as partner.

It all began 232 years ago. In 1788, the first Chabad Rebbe, Schneur Zalman of Liadi (also known as the Alter Rebbe) issued a plea to his faithful to send more than they could spare (poverty being an ever-present fact of life for most) to sustain Jewish immigrants braving the hardships of life, including food shortages, hostile neighbors and disease, in a pre-state Israel under less-than-welcoming Ottoman rule. A decade later, the rabbi was jailed for treason by the Russians for raising these funds to support Jews in Israel. A box filled with Passover seder staples, including fresh fruits and vegetables, as well as matzah, is prepared for delivery. Credit: Mendy Hechtman.

Including Sofia, who made aliyah from Russia in 1990. Now 85, she lives alone in Jerusalem and knows that meals will be delivered to her home twice a week. “I don’t have to worry where I will get food to eat, and I don’t have to cook it myself,” she said through a translator. “I am so thankful for this help.”

And Menachem, who lives with his wife and 11 children in Jerusalem and lost his job due to the coronavirus pandemic. The family receives both a debit card for use at supermarkets and deliveries of food boxes. “Especially during the holidays, when food is so expensive and still you want to give a sense of ‘specialness’ to the meals, it helps tremendously,” he says.

These are the stories that keep Colel Chabad director Rabbi Sholom Duchman going.

Ever since the day the Lubavitch Rebbe, Rabbi Menachem Mendel Schneerson, told the young newlywed that starting with the first Rebbe Schneur Zalman and including himself as the seventh, “all of the Chabad rebbes had a special place in their hearts for Israel,” recalls Duchman. “He told me that I am the one who needs to raise the money for everyone there who is hungry.”

Forty-three years later, Duchman is still heading up this mission. And it’s one that has expanded in the last year to embrace what Rabbi Menachem Traxler, director of volunteering for Colel Chabad, calls “Israel’s newly poor.”

“This year it can happen to anyone,” says Traxler, who directs Colel Chabad’s Pantry Packers, a volunteer-run food packing facility in Jerusalem. “Many of those in need today are people who, until COVID, had jobs with enough coming in to feed their families. Now, for the first time in their lives, they can’t pay their bills and buy enough food for their children.”

Pantry Packers, which got its start in 2013, is just one of Colel Chabad’s dozens of programs benefiting Israelis in need.

Chief among them is the National Food Security Initiative, a food-distribution system that feeds 10,800 families every month—with the cost of the multimillion-dollar program split evenly between the organization and the government.

And, though the numbers of the needy have exploded, Traxler is also heartened by “those families managing to get back on their feet and not needing the help anymore.”

Other Colel Chabad programs include 23 soup kitchens, feeding some 3,000 seniors a day, half of whom now require “Meals on Wheels” home deliveries; a safety-net program especially for widows and orphans; a lunch-bag initiative for low-income school kids; four not-for-profit supermarkets selling food below market cost; scholarships for youngsters who have lost a parent to COVID-19 or other causes; nine dental clinics; rehabilitation centers for those with neurological conditions; and 16 day-care centers in low-income neighborhoods allowing mothers to work.

And this time of year, the Passover Seder-in-a-Box delivery program is well underway to provide festive meals to 6,000 needy families, replacing the public seders Chabad typically hosts around the country. This winter, as the social and economic costs of the crisis continued to increase, Israel announced the most sweeping distribution initiative in its history. To maximize the program’s impact, the Israeli Ministry of Interior asked Colel Chabad to distribute monthly food cards—each worth as much as 2,400 NIS ($725)—to needy families in Jerusalem and central and southern Israel (another organization, Pitchon Lev, is covering the north). A total of 200,000 families are being helped through the 700-million-shekel ($211 million) program.

“Together, we’re performing miracles,” says Duchman. “And the program’s only qualification is need, including 64,000 households in Arab villages during Ramadan.”

The new program could not have arrived at a more auspicious time, with hard-hit families seeing both the joys of Passover (and its expenses) just around the corner. “The government knew they could trust us to get the right resources into the right hands at the right time,” says Colel Chabad’s Israel director Rabbi Mendy Blau. “With Passover coming, it should be a huge help.”

And, as Interior Ministry spokesman Riel-Shamir Blatt, puts it: “We know we have children going to bed hungry and old people who can’t even get out to soup kitchens this year. We knew we needed a huge program to reach as many of them as possible, and we’ve seen that Colel Chabad could do the job.”

Much of what the charitable organization is able to accomplish is not only donor-funded but also volunteer-driven. A factor that, organizers say, significantly reduces their costs.

Take Alex Katz, for instance. The former Californian has been supporting these efforts with both his time and financially for more than six years. 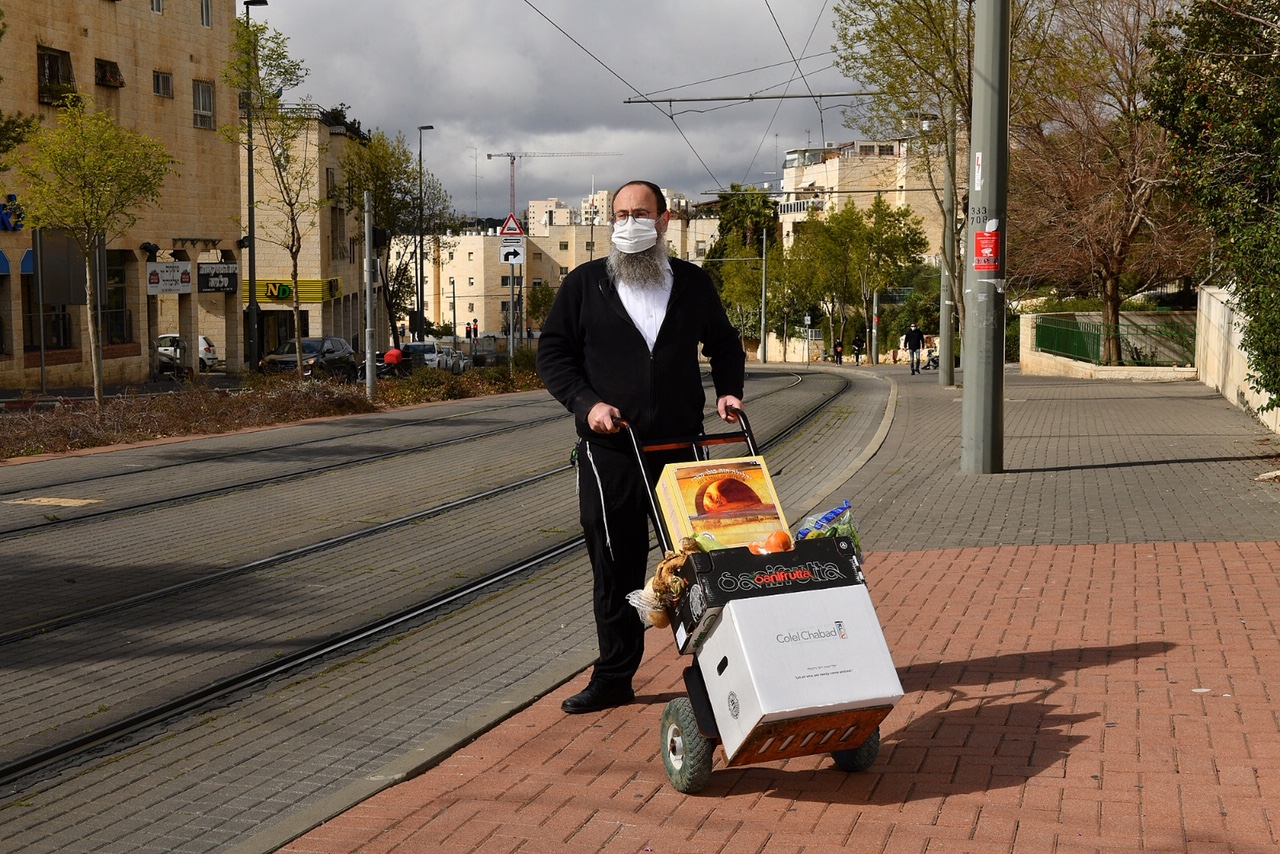 Katz says it’s of paramount importance to teach his five children the mitzvah of giving to those in need. As a family, they often volunteer at Pantry Packers, distribute gifts to hundreds of orphans each Hanukkah and have supplied a printing press so adults with multiple sclerosis can earn an income.

“It’s all hands-on chesed (‘lovingkindness’),” says Katz. “And it’s inspiring to watch Rabbi Traxler, who never backs down from even the biggest challenge. The lesson for us all is to focus more on what we can do and less on what we can’t do.”

Indeed, one bonus of Colel Chabad’s work is its invitation to Diaspora Jews to get involved. Bar and bat mitzvah groups are welcome to help pack food during the year, as are visitors from overseas.

“By supporting us, they know they’re improving the lives of Israel’s poorest of the poor,” says Duchman. “These are people who literally have no food in the refrigerator unless we provide it and do it in a way that maintains their dignity.”

In his 43 years on the job, Duchman says one crystalizing sight was watching an orphan who had been able to finish high school and become an officer in the army thanks to Colel Chabad’s support.

For Blau, one point of pride was when Israeli TV personality Guy Lerer approached them last September with a request: After putting out a call for all those who wanted to turn over their governmental stimulus checks to the poor, he was swamped with more than 20,000 responses.

“Millions of shekels were pouring in,” attests Blau.

So Lerer asked Colel Chabad to be among the select few organizations to distribute it.

“The donors needed us to make it happen, to turn their money into food, electricity and heat for people who’d otherwise be going without,” says Blau. “That’s what we do best—getting what’s needed into the right hands.”

To learn more about Colel Chabad and how to get involved, visit: www.colelchabad.org/.